‘When in Rome’ is a fountain of silliness 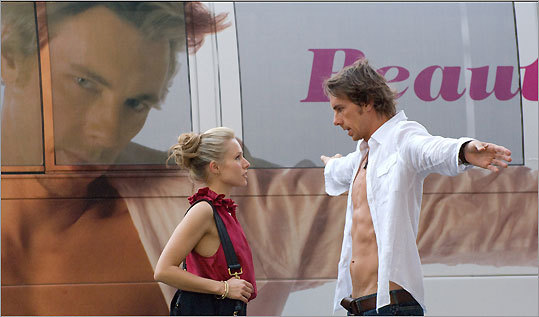 Dax Shepard is just one of Kristen Bell's unwanted suitors in "When in Rome." (Myles Aronowitz)
By Janice Page Globe Staff / January 29, 2010

Ever hear of a little movie called “Three Coins in the Fountain’’? It was a 1954 Academy Award nominee for best picture, not because it was a great film (it wasn’t), but because it charmed and transported American viewers eager to take in Italy via CinemaScope, and because it had a very catchy title song penned by Jule Styne and Sammy Cahn.

“When in Rome’’ has coins and an Italian fountain, too. But it winds up being predictably charmless and forgettable, even as a travelogue or iPod download.

So much for evolution.

To begin with, there’s actually not a lot of Rome in “When in Rome.’’ Directed presumably on the cheap by Mark Steven Johnson (“Daredevil,’’ “Ghost Rider’’), it stars Kristen Bell (“Forgetting Sarah Marshall,’’ “Veronica Mars’’) as Beth, a Manhattan museum curator with good taste in everything but boyfriends. Beth travels to Italy for two days to attend her sister’s wedding, where she spontaneously decides to tempt fate by fishing coins out of the Fontana D’Amore (fountain of love) hoping they possess the magical power to bring her true romance. Instead, the coins make her irresistible to the quirky collection of men who tossed them into the fountain in the first place, and they eventually all turn up as unwanted suitors when she gets back to her life in New York.

Among the infatuated is “Napoleon Dynamite’’ star Jon Heder as a demented street magician, Will Arnett as a high-strung artist, Dax Shepard as a supremely narcissistic model, and Danny DeVito as a sausage magnate, because sausage is funny. It’s a formidable comedic ensemble - Shepard, in particular, makes something amusing of every scene he’s in - but the silly script by “Old Dogs’’ writers David Diamond and David Weissman doesn’t give anyone much to work with. Sample hilarious dialogue: “So, you’re stalking me now?’’ “No. I’m just running into you in a premeditated manner.’’

It’s not hard to see why “Napoleon Dynamite’’ costar Efren Ramirez gets some of the biggest laughs just for showing up to do a cameo.

Meanwhile, putting the romance in all this comedy is Josh Duhamel (“Las Vegas,’’ “Transformers’’), playing a jock-turned-reporter named Nick, who is smitten with Beth at the wedding and wants to keep the fire burning when they return to Manhattan. Beth likes Nick, but questions whether he’s truly interested or under the same spell as all the others. Bell and Duhamel do make a stylish couple who look like they belong in the Guggenheim after hours, but they are as deep and interesting as the fictional Fontana D’Amore.

“When in Rome’’ even wastes the time and talents of its veteran supporting players, including Anjelica Huston, Don Johnson, and Peggy Lipton. The result is a predictable mess.

Do as the Romans do. Drive around it.