Thanks to a major role in the next ‘Twilight’ movie, fame is about to bite Boston’s Julia Jones in a big way 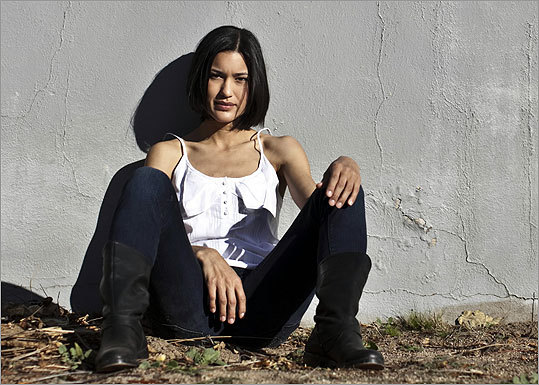 (Eric Grigorian for The Boston Globe) Julia Jones, an actress from Jamaica Plain who appears in the third installment of the "Twilight" series, says “Twlight” fans shouldn’t be worried about “Eclipse.” She promises it will be good – and true to the series.
By Meredith Goldstein Globe Staff / January 26, 2010

LOS ANGELES — If the first two installments of the ‘‘Twilight’’ franchise have proven anything, it’s that anyone associated with the wildly popular teen vampire movies will become instantly famous and be followed around by the paparazzi. That’s fantastic-yet-overwhelming news for Boston native Julia Jones.

Jones, 29, has a pivotal role in ‘‘The Twilight Saga: Eclipse,’’ the third film in the teen vampire series based on the best-selling books by Stephenie Meyer. In the movie, due in theaters June 30, Jones plays Leah Clearwater, the only female werewolf in the pack, a mostly miserable young woman who is cursed with the power to read the mind of her ex-boyfriend — who has fallen in love with someone else. Jones explains that Meyer’s detailed portrait of Leah helped her fall in love with the angsty, supernatural character.

“Because Stephenie Meyer wrote the layers, you’re kind of serving something else,’’ says Jones, who had a small role on NBC’s “ER’’ and acted in a few indie films before landing the role in “Eclipse.’’ “Usually you’re looking for any clue you can in a script - usually it’s skeletal, because it’s not prose. But in this case, there’s 3,000 pages of detail.’’

Jones has perfected the art of the brooding werewolf frown, but in real life she has a sweet smile and a quick, dry sense of humor. She grew up in Jamaica Plain, summered on the Cape, and graduated from Boston Latin School. Her mother still lives on one of those pretty roads that connects Centre Street to the Jamaicaway.

“The cool thing about it is that there’s a pond on one end of our street - I grew up sailing on it - and on the other end of the street there were housing developments,’’ Jones says during a visit to her agent’s office in Los Angeles after returning from “Eclipse’’ filming in Vancouver.

Jones started her stage career as a child. By 4, she was dancing with the Boston Ballet in productions of “The Nutcracker.’’ By high school she was a Wheelock Family Theatre star.

Wheelock director Jane Staab says Jones was always intense and introspective, even as a teen. “Her intelligence just emanated from her,’’ Staab says. “She has an inner light you just sort of respect. It makes you sort of jump.’’

Jones left Boston after high school to study at Columbia University, where she spent her free time modeling. She had done periodic shoots for T.J. Maxx in Massachusetts, but in New York the work got more serious. “It was wonderful. I went to Europe and traveled a ton. I did a lot of catalogs - Esprit and . I worked for the Gap and Levi’s. The clients that really keep you going are, like, Macy’s and Target.’’

By her last year at Columbia, Jones had turned her attention from theater to screen. She moved to Los Angeles and picked up roles in small movies, often playing Native Americans (Jones is part Chickasaw and Choctaw). Eventually she was cast as Dr. Kaya Montoya in the 2008 season of “ER.’’

After landing the “Twilight’’ role last year, Jones was required to keep the news a secret for a month. “Twilight’’ information “goes viral’’ quickly, she explains, and Summit Entertainment wanted to keep “Eclipse’’ casting under wraps. There was also the practical matter of becoming involved with a film series that had already made millions of dollars. “It got very business-y very quickly. Before you negotiate a deal like that, you want to have certain people in place, none of which I had.’’

As soon as Jones was allowed to disclose that she had been chosen to join one of the most popular franchises in history, she did do some private, low-key celebrating. She went to New York to see old friends. “The people that are closest to me, who I’ve known my whole life,’’ Jones says. “My best friends in this world to this day are my best friends from high school.’’

Penny Wells, Jones’s mother, says she isn’t surprised that her daughter won the role of a tortured werewolf. Wells, the national executive director of Students Against Destructive Decisions, says her daughter has always been focused on the human mind and what fuels emotions. “She is a very serious person,’’ Wells says. “She’s very interested in what makes the world tick.’’

During her intense three weeks of shooting for “Eclipse’’ last fall, Jones was exposed to the world of big-budget movies and life as a Hollywood A-lister. She was surrounded by the franchise’s big names - Robert Pattinson, Kristen Stewart, and Taylor Lautner - who, at the time, were coping with their new international fame while trying to work.

“I really am in awe of [their] ability to handle all of that,’’ Jones says. “It’s their job, and they treat it as their job. For whatever reason - and Taylor is 17 years old - they understand that. They’re so committed.’’

Then there was Meyer, the author who Jones describes as an integral part of all decisions made on set. “She’s kind of got this sort of God aura about her,’’ Jones says. “She lives up to it. She’s very anchored. She’s just this incredible authority and presence.’’

The work in “Eclipse’’ was far more physical than Jones thought it would be. There were fight scenes - and she was the only woman wolf joining in on the action. She quickly found that she could lean on her wolf friends for support.

“I feel very close to most of them - to the wolf pack, for sure,’’ she says. “They sort of feel like an insta-family. In a way, the whole cast does because it’s such a unique experience.’’

Chaske Spencer, who plays Leah’s ex-love Sam in the films, said the feeling was mutual. He speaks of her lovingly and says it was nice to have a woman on the set with the pack. “She’s my girl,’’ he says, laughing. “She’s a tough chick. She can hang with the boys.’’

When Jones returned to Los Angeles from “Twilight’’ land last fall, she was right back to work, taking on a role in the complex Richard Montoya play “Palestine, New Mexico.’’ The project had her back to reality and in constant rehearsals. “I come to find out, these theater people do not give a crap about ‘Twilight’ - which is kind of a thorn in my side,’’ she says, laughing.

But soon Jones will be back with her supernatural friends. “Eclipse’’ doesn’t come out for five more months, but Jones has been warned that publicity starts soon. She’s trying to get herself ready for the madness - mall tours, meet-and-greets, and the obsessed, self-described “Twi’’-hards, who will be watching - and blogging - as she brings their Leah to life. Then there’s the fourth and final installment, “Breaking Dawn,’’ which Meyer has confirmed might be split into two movies filmed over the next few years.

The madness of it all hit Jones when she attended “The Twilight Saga: New Moon’’ premiere in November with her “Eclipse’’ castmates. Her character hadn’t yet been introduced in the films, so she was unrecognizable to the thousands of fans who lined up to get a quick glimpse of Pattinson, Lautner, Stewart, and the others.

“After doing the press line, I was starving. And there were 30,000 fans in Westwood. People had been camping out for five days or so. I just started to walk through the fans to the . And as I started doing that, one of the actors who is also in the wolf pack, Alex Meraz, he was on his way in to do the press line, so we passed each other. And when the fans saw him, they went absolutely insane. And just standing there next to him, there’s this sense of, ‘This is probably going to be what’s in store.’ ’’