Love or hate him, but don't ignore him: Hollywood's most fascinating firebrand is back onscreen

“It is a frightening thought that man also has a shadow side to him, consisting not just of little weaknesses and foibles but of a positively demonic dynamism. . . . We know that the wildest and most moving dramas are played not in the theatre but in the hearts of ordinary men and women who pass by without exciting attention, and who betray to the world nothing of the conflicts that rage within them except possibly by a nervous breakdown.’’ - Carl Jung, New Paths in Psychology (1912) Welcome back, Mel Gibson - our pop culture’s very own Jungian shadow. When the Boston-set thriller “Edge of Darkness’’ hits theaters Friday, it will mark Gibson’s first appearance in a motion picture in six years, and his first leading role in eight. Which face will he project to the world: The one we thought we knew for over two decades of superstardom? Or the one we think we know now?

Gibson has been a busy, busy boy off-screen, obviously. Since his last major acting role, in 2002’s “Signs,’’ he has directed the 14th-highest grossing film ever (that little spiritual lightning rod “The Passion of the Christ’’) and a ripsnorting Mayan action movie, “Apocalypto.’’ He has produced feature films, TV series, and the 2005 concert movie “Leonard Cohen: I’m Your Man.’’ His long marriage came apart. And of course there was Gibson’s DUI arrest and subsequent drunken anti-Semitic tirade, possibly the most astonishing performance of 2006, and one of the extremely rare moments when the genteel Hollywood veil falls from the face of celebrity and we see the raging, terrified beast beneath.

So, no, Gibson hasn’t been out of the public eye so much as laying low, even as his public persona has stalled somewhere between Talented Wackjob and Sad Punch Line. When Ricky Gervais introduced him at last week’s Golden Globes with “I like a drink as much as the next man - except when the next man is Mel Gibson,’’ you could see the star grimace and take it. He understands this is the next stage of celebrity life in America - after the downfall, the 12-step period in the wilderness, followed by the march of contrition. Plus, he has a movie to sell.

Still, as hard as it may be for those on the cultural left and cultural right to acknowledge - those who think he’s our national troglodyte and those who are sure he’s a victim of the secular liberal media - Gibson is weirdly necessary to our public life. Over three decades of films and fame, he has increasingly carried his shadow with him, letting it ripple out from his shoulders like a poisonous cape. He acts impulsively on screen and off; he states his beliefs in entertainingly caffeinated jags that tend to run off the rails. (Try this on, from a 2006 Entertainment Weekly interview: “If I’m watching a video of Osama bin Laden looking through a rifle, how do I know he’s not just some shoe salesman they told could be in a movie? You know what I mean?’’ Actually. . . no.)

He has carried his matinee-idol handsomeness warily (not for nothing was his 1993 directorial debut titled “The Man Without a Face’’) and he takes a masochistic pride in his own victimization. It’s not a Mel Gibson film until the hero has been flayed, beaten, drawn and quartered, crucified. Yet despite the horror and censure that greeted his DUI outburst, he remains one of the most well-liked men in Hollywood, a loyal friend who bankrolls up-and-coming filmmakers, has donated millions to charity, and is generally considered a stand-up guy when he’s not falling down.

Jodie Foster, not necessarily an actor you’d think would be in Gibson’s corner, has been a friend since 1994’s “Maverick.’’ She’s currently directing him in a movie called “The Beaver,’’ a Charlie Kaufmanesque comedy about a man convinced the beaver puppet on his hand is alive. At this point in his career, that’s a typical Gibson project.

So which Mel do you believe in? The hunk or the clown? The racist or the true believer? The lunatic, the talent, or the pal?

Some of us vote for All of the Above and have ever since Gibson found his groove in the late 1980s, with the first “Lethal Weapon.’’ The films that came before blow hot and cold - 1981’s “The Road Warrior,’’ a.k.a. “Mad Max 2,’’ is the movie that took Gibson from Australia to the world and it remains a brilliantly propulsive action extravaganza, but Mel is dutifully stoic throughout. He made a proper and convincing romantic lead in Hollywood dramas like 1982’s excellent “The Year of Living Dangerously’’ and 1984’s muted, eccentric “Mrs. Soffel’’ but he’s a dud Fletcher Christian in the otherwise underrated “The Bounty’’ (1984).

The pop explosion of “Lethal Weapon’’ (1987), though, marked the debut of Mad Mel. Playing borderline psycho LA police detective Martin Riggs seemed to free up something in Gibson, and he danced along the thin line between the character’s suicidal tendencies and the actor’s own deep, abiding love of the Three Stooges.

Suddenly Gibson’s performances began to burn with a manic energy that at times threatened to immolate the man himself. In 1990 alone, he played a merrily crazed pilot in “Air America’’ and surprised many observers with a muscular, intense “Hamlet’’ for director Franco Zeffirelli. In retrospect, the latter was a crucial role for Hollywood’s young prince. The tension between gallows humor and self-loathing is key to understanding Gibson and the faces he presents to the public, as is a deeply conflicted vision of the relationship between fathers and sons. This is his version of Jung’s shadow, and it has only grown larger.

During the early 1990s, Gibson came through a spiritual crisis, renouncing his party-going ways to trod his father’s narrow path of traditionalist Catholicism. Increasingly unhinged acting choices and a penchant for onscreen violence - self-inflicted or otherwise - began to dominate. “Braveheart’’ (1995) is generally (and correctly) derided as one of the least worthy best picture winners in Oscar history, but it and “The Patriot’’ (2000) spotlighted Gibson’s growing martyr complex as well as his self-awareness of same.

Yet “Conspiracy Theory’’ (1997), in which the star plays a crackpot cabbie whose paranoid fears turn out to be true, couldn’t have been made by an actor who lacked a sense of humor about himself, and “Payback’’ (1999) is a brutal crime drama that lets Gibson thrill to releasing his inner badass. In “Signs’’ (2002), he puts faith to the test of alien invasion and finds it less sturdy than he’d like. And if the scene in “What Women Want’’ (2000) in which the star puts on pantyhose and tries to walk like a girl can’t convince you of Gibson’s comic timing and engaged wit, you’re just not paying attention.

As for “Passion of the Christ,’’ say what you will but Gibson made exactly the movie he wanted, infused with a punishingly medieval vision of Christ’s trials and resurrection that he and millions of believers took for divine grace. Violence in Mel’s movies, in fact, has come to seem inextricable from beauty and meaning, the rainforest profusion of “Apocalypto’’ yielding to human hearts ripped from chests in living color. Heroes fall, sometimes by their own hand. Movie stars, too, when they drink too much and reveal their dark sides.

He is not a well-behaved star, and that is oddly welcome: We need to see the beasts beneath our icons. The vileness that poured out on a Malibu roadside three years ago - not just the blotto racism but the anger, megalomania, resentment, insecurity - are kept carefully hidden by an industry and a society that just don’t want to know. But it’s in them and it’s in us, and Gibson can’t help bring it to the surface. Something in him - religion or the devil, entitlement or booze - prompts him time and again to go too far, to release the shadow. In so doing, he illuminates what we ask of our stars: How we demand they behave and how we punish and enable them for stepping over the line.

So forgive Mel Gibson or not: It’s up to you. I’ll gladly go to “Edge of Darkness’’ to see whether our most fascinatingly bipolar leading man - I mean that as both metaphor and clinical diagnosis - can still tack between the scary and the funny, the deluded and the revelatory. Gibson’s is a talent that seems propelled by energies and urgencies he can channel but never quite understand. He’s forever Jung, and there are those of us who will never stop watching. 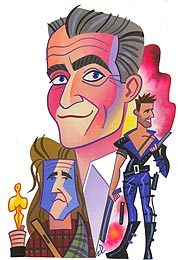