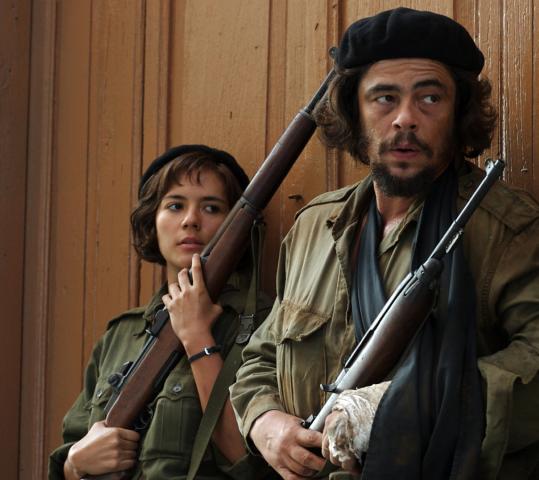 Going the distance in a Guevara biopic

For all the commendable ambition involved in Steven Soderbergh and Benicio Del Toro’s exploration and deconstruction of Che Guevara’s iconic status in their two-part indie epic, “Che’’ (2008), the film has taken plenty of knocks for its challenging, four-hour sprawl. It’s an issue that’s arguably even more problematic on DVD, where both parts of the Spanish-language biopic are included in a three-disc package. In recounting Guevara’s historic role as Castro commandante in Cuba and his subsequent, fatal failure to bring revolution to Bolivia, Soderbergh employs a naturalism that makes guerrilla campaigns feel like a slog. In a theater, viewers could hunker down and commit to this without distraction, but at home, there are bound to be deserters. Regardless, it’s fairly clear that the drawn-out pacing is as intended. Shots of Che struggling with asthma on off-road marches get persistent if unforced play, while combat sequences are more straightforward than operatic; and compelling, black-and-white re-creations of Guevara appearing before the UN are reserved for fleeting first-half cutaways. Extras: A 50-minute retrospective details the film’s genesis as a project that Soderbergh considered producing for one-time Bolivia political correspondent Terrence Malick to direct, with the focus solely on Guevara’s lesser-known effort there. Guevara biographer Jon Lee Anderson supplies commentary, while liner notes consider the project in terms of Soderbergh’s history of alternating between studio bigness (the “Ocean’s Eleven’’ series) and experimental fare. (Criterion, $49.95; Blu-ray, $49.95; available now)

In Drew Barrymore’s agreeably breezy directing debut, Ellen Page straps on skates - and softens her familiar cynicism - as a small-town Texas high schooler turned roller derby rookie of the year. After catching Page in “Juno’’ and “Hard Candy,’’ you definitely have to roll with the tamer coming-of-age material she’s handling here. (And what’s with that recent spot?) She’s certainly entertaining to watch, though, as are derby queen Kristen Wiig and hell-on-wheels rival Juliette Lewis. The skating scenes aren’t particularly dynamic, but the atmosphere Barrymore captures is infectious. Extras: deleted scenes. (Fox, $29.98; Blu-ray, $39.99)

Director Jane Campion (“The Piano’’) chronicles the tender, literally inspirational relationship between Romantic poet John Keats (Ben Whishaw, “I’m Not There’’) and his fiancee and muse, Fanny Brawne (Abbie Cornish, “Stop-Loss’’). What’s most impressive about the film is how subtly Campion makes the case that her 19th-century subject is actually pretty timeless. When boldly creative seamstress Fanny goes to a book shop seeking a copy of “Endymion,’’ she might as well be an alt-fashion chick hunting around Nuggets for a CD by that local rocker she’s crushing on, figuring she’ll size him up, artistic sentiment first. Extras: production featurettes. (, $27.96)

What immediately grabs you about first-time filmmaker Rupert Wyatt’s British jailbreak flick is the fresh cast: Sympathetic lifer Brian Cox makes a dash for it with a group that includes Joseph Fiennes and Dominic Cooper (“The History Boys’’). (Damian Lewis of “Life’’ is the bippy-topped kingpin of their gonzo, “Mad Max’’-imum security pen.) What will keep you intrigued is their commitment to minimalist dialogue, which makes a terrific puzzle out of the story’s jumps back and forth between planning and execution. Extras: In a spoiler, Wyatt reveals the film’s roots in Ambrose Bierce’s “An Occurrence at Owl Creek Bridge.’’ (MPI Media Group, $19.98)

In Tyler Perry’s latest, Taraji P. Henson is a nightclub singer who comes to change her tune about family when she’s put in charge of her late sister’s kids. Extras: production featurettes. (Lionsgate, $29.95; Blu-ray, $39.99; available now)

In the locally shot, workaday version of “Avatar,’’ Bruce Willis is an FBI agent in a near-future world in which people live their lives through idealized robotic look-alikes. Generic fare, although Willis is solid and director Jonathan Mostow (“Terminator 3’’) plays with some interesting metaphors for the evils of social networking. Extras: commentary by Mostow. (Touchstone, $29.99; Blu-ray, $39.99)

Titles are in stores Tuesday unless specified.