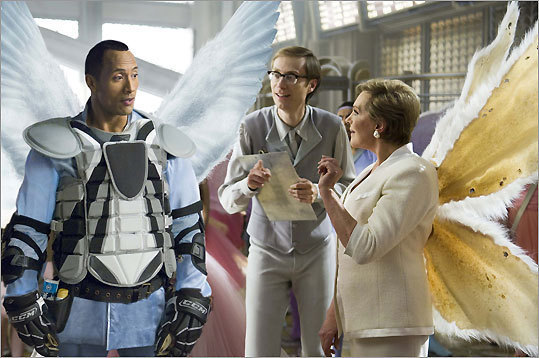 You know what got “Tooth Fairy’’ made the minute you see it: Hey, how funny would it be to put Dwayne Johnson in ballerina slippers, pink tights, and a tutu? Not very. But here’s the movie anyway, scarcely more than the pitch meeting that spawned it. Johnson plays Derek Thompson, a former NHL player now notorious in the minor leagues for his bone-crushing play. His way with opponents’ dental work has fans calling him the Tooth Fairy. In fact, he’s such a cross-checking star that the penalty box has a Barcalounger.

Derek’s gift for crushing the fantasies and professional aspirations of children, however, particularly the kids of his girlfriend (Ashley Judd), wins him two weeks in a different sort of penalty box. The department of “dissemination of disbelief’’ whisks him off to a fairy land presided over by the lovely Julie Andrews, who descends to earth on an unconvincing set of wings. He’s consigned to serve as a tooth fairy until he believes in dreams himself. The job comes with all kinds of gadgets - invisibility spray, a paste that shrinks you down to nothing.

It took five writers to get this movie made and one flatulent directing performance from Michael Lembeck. Most of the scenes just sit there on the screen, inert. For what it’s worth, “Tooth Fairy’’ is a somehow dimmer cousin of those Tim Allen “Santa Clause’’ movies. But the lesson here seems borrowed from a peewee hockey manual - “You can’t win if you don’t take a shot’’ - and the hockey playing itself is an embarrassment. So is the movie’s lame gay subtext. (Here’s the end of one exchange, allegedly about Facebook: “I love to be poked!’’)

As Derek’s lady friend, Judd is the earnest kind of terrible an actor can be only when playing a mother in a family movie. Everything she does is a variation on “Oh, geez!’’ But she’s one of the least annoying people here. As the young hotshot on Derek’s team, the X Games star Ryan Sheckler performs with a bucket of Disney Channel attitude. Derek is also followed around by Andrews’s number two, played by Stephen Merchant, a gangly man whose awkward shtick barely made the children in attendance laugh.

But they did laugh, mostly at Johnson, who, having served time in “The Game Plan ’’ and “Race to Witch Mountain,’’ is irresistible to little people. Beneath those enormous pecs beats the heart of a Muppet. For the moment he’s trapped as a mascot for this sort of pre-chewed family entertainment. But Johnson’s grins and grimaces seem numbed up here. It makes sense. For anyone over the age of 6, a shot of Novocain is required.