The agonies of Charles Darwin 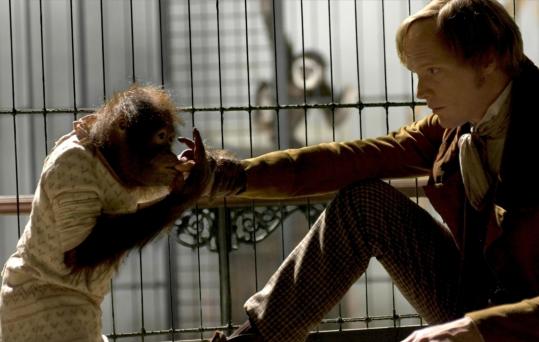 The opening titles of “Creation’’ call Charles Darwin’s 1859 “On the Origin of Species’’ “the biggest single idea in the history of thought’’ and promises that “this is the story of how it came to be written.’’

The first claim is arguably true - doesn’t the wheel count for something? - while the second is unfortunately not. “Creation’’ tries so hard to dramatize Darwin’s spiritual, physical, marital, and mental agonies during the writing of “Origin’’ that it turns overwrought and impenetrable. There are good performances and fleeting moments of exquisite moviemaking, but the experience as a whole is an evolutionary dead end. A dodo this is not, but rather a curiosity - an aye-aye of a film, or a narwhal.

Paul Bettany has been cast as Darwin, which gets your hopes up: The British actor has brought intelligent mischief to such period outings as the recent “The Young Victoria’’ and 2003’s forever-underrated “Master and Commander’’. He also played a figment of Russell Crowe’s schizophrenia in “A Beautiful Mind,’’ which is more germane, since Darwin is regularly visited by the ghost of his daughter Annie (Martha West), dead at 10 of tuberculosis.

We miss her almost as much as he does: West gives a lovely portrayal of an ardent, tough-minded junior naturalist - her father’s great hope and, in a different way, the movie’s. You understand why Darwin’s other children wilt with sadness as they watch their father grieve. They’ll never match up to the Invisible Girl.

Mrs. Darwin is another matter. Jennifer Connelly - Bettany’s real-life spouse - has been cast as Emma, straight of back and certain of the Almighty. She hopes her husband will forever dither in his backyard pigeon coop, breeding Fantails and Pouters and Jacobins while stalling the Great Work. She and he both know - and the local Reverend (Jeremy Northam) strongly suspects - that “Origin’’ will herald the triumph of nature and the end of God.

Indeed, Darwin’s colleagues want him to finish for exactly that reason, Thomas Huxley (a very entertaining Toby Jones) spluttering with atheistic spleen and the gentler Joseph Hooker (Benedict Cumberbatch) urging him on in the name of science.

This is a lot to keep up with and “Creation’’ adds more, darting in and out of Darwin’s past in flashbacks that grow profuse and confusing; we find ourselves studying Bettany’s changing hairline to figure out exactly when we are. Crosscurrents of faith and grief and art and love and historical duty swim back and forth, and both Darwin and the movie buckle under the stress. Instead of pulling you into the great man’s crisis, the film pushes you out.

The drama, when you can glimpse it, lies in Darwin’s wrestling to accept nature as a factory of survival and death - harshly beautiful when he and his children watch a fox stalk and kill a rabbit (the younger ones shriek but Annie understands), unforgivable when it’s his daughter who’s dying. If God no longer exists, who will you rage at?

A straightforward approach might have separated the script’s threads more clearly. The director, Jon Amiel, made the landmark 1986 BBC miniseries “The Singing Detective,’’ and “Creation’’ has a similar busyness, playing minor Cubist games with time, place, and action to illuminate its hero’s soul. The movie is adapted from a biography by Randal Keynes, Darwin’s great-great-grandson, and it’s admirable in trying to show us a different man than the old duff we know from that one famous photograph - a full Darwin, and a conflicted one.

Bettany is up to the challenge, almost too much so. The actor is so emotionally present that you feel you’re watching him in endless close-up, waiting for the camera to pull back and establish a context. The scenes between Bettany and Connelly have an intimacy and sorrow that I’d like to think comes from two people who know each other very well, but that may be grasping at straws. “Creation’’ hyperventilates when it should breathe. It succeeds so well in humanizing Charles Darwin that you wonder how he wrote his book at all.

Written by: John Collee, based on a biography by Randal Keynes