The Spy Next Door

Few kicks from Chan in ‘The Spy Next Door’ 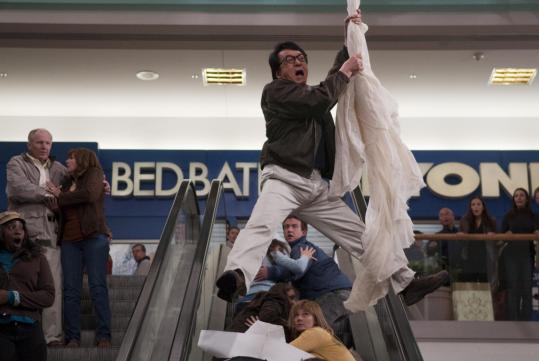 Jackie Chan, starring as agent Bob Ho, scales back on his stunts in “The Spy Next Door.’’ (Colleen Hayes)
By Ty Burr Globe Staff / January 15, 2010

‘The Spy Next Door’’ may be a Z-movie rip-off of “The Pacifier,’’ which was a B-movie rip-off of “Kindergarten Cop,’’ which wasn’t a grade-A idea to start with, but at the new movie’s center is a notion that’s charmingly, if not dementedly democratic: That a nerdy businessman/undercover super-agent played by action star Jackie Chan could build a loving, sustainable relationship with the suburban single mom next door played by supermodel Amber Valletta.

Only in America, folks, and possibly only in the movies, but this one doesn’t bat an eye.

Otherwise, the film’s so formulaic your 6-year-old will be ticking off the plot points as they lope by. “Spy Next Door’’ manages to be likable, though, because Chan is likable, even when he’s slumming in undercooked family fodder. His character, Bob Ho, is retiring from the CIA after putting sneering Russian baddie Poldark (Magnús Scheving) behind bars one last time, and all he wants to do is propose to Gillian (Valletta) and win over her three children.

Do I have to spell out what happens? Gillian is called away for a week (sick relative) and Bob takes over the parenting of sullen teen Farren (Madeline Carroll), precocious tweener Ian (Will Shadley), and cutesy-poo Nora (Alina Foley). Burnt toast, clogged toilets, and life lessons ensue, and eventually the two halves of Bob’s life come crashing together.

Carroll makes a believably obnoxious 13-year-old in this context and Katherine Boecher gets a few laughs as Poldark’s sidekick - she’s doing Natasha Fatale from the old “Rocky and Bullwinkle’’ show, and good for her. Otherwise, Chan’s the only reason to be here, turning his fight scenes into the usual slapstick ballets with bicycles, ladders, and the like.

At 55, though, the star is relying increasingly on wires and stunt doubles, and sharp-eyed viewers will easily spot where. “The Spy Next Door’’ opens with a montage of Bob’s previous exploits that are actually clips from earlier Chan movies, and if you really want to remind yourself what the man’s capable of, there’s always “Police Story’’ (1985) and “Drunken Master II’’ (1994), among, oh, 70 or 80 others. Heck, even the “Rush Hour’’ movies are Bergman next to this.

The most depressing part about “The Spy Next Door’’ is the revelation that the Central Intelligence Agency works out of a rundown office complex in Albuquerque and is headed up by the likes of Billy Ray Cyrus and George “Most Intensely Annoying Man in Show Biz’’ Lopez. Suddenly our recent international adventures start to make sense.

THE SPY NEXT DOOR Directed by: Brian Levant