Pedro Almodóvar on becoming a filmmaker of shifting moods and genres 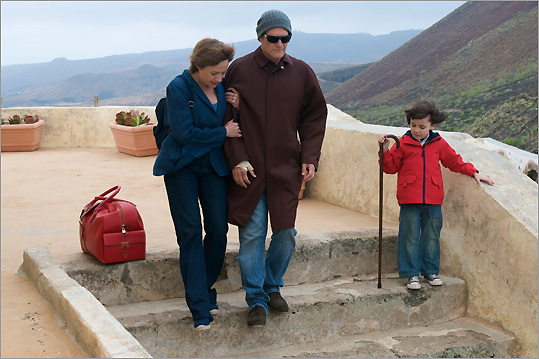 NEW YORK - There’s no doubt that the Spanish auteur Pedro Almodóvar has gotten more sophisticated and self-assured as a filmmaker. But since “All About My Mother’’ in 1999, and continuing through his new “Broken Embraces,’’ his work has become increasingly moody, even melancholic.

While his films still burst with flamboyant flights of fancy, Almodóvar has mastered the art of modulating tones and styles, from high-wire comedy to ripe melodrama.

But melancholic? He doesn’t agree. “There’s a certain passivity to melancholy that I really wouldn’t recognize in my work,’’ he says through a translator during a recent interview here. Still, he allows that his films have “certainly become darker and more somber’’ in their visual styles, the stories they depict, and the themes with which they grapple.

“A certain baroque quality that was always present has only intensified, and it has intensified at the level of narrative, except that now there’s so many stories all encapsulated in one single film,’’ he explains. “So that that baroque quality is no longer on the surface of the things that I talk about, but it has really become part of the structure of the stories that I tell.’’

As Almodóvar, now 60, has grown as a writer, his films have developed in various directions, with multiple stories and characters taking center stage. There are extended flashbacks, flashbacks-within-flashbacks, and films-within-films. In “Broken Embraces,’’ the main character’s long-lost film, “Girls and Suitcases,’’ is an homage to Almodóvar’s madcap 1987 classic, “Women on the Verge of a Nervous Breakdown.’’

“As I have moved on, my films have become much more complex,’’ says the onetime cinematic outsider. “That’s, of course, in part due to getting older and becoming more mature. Little by little, you become the person that you are, and you become it by default, because you’ve lived the life that you’ve lived.’’

The twisty, time-shifting narrative of “Broken Embraces’’ centers on a blind screenwriter named Harry Caine (Lluís Homar), who lost his sight in an accident 14 years before. In a long flashback, Harry recounts to his assistant the long-buried details of his previous life as the dashing film director Mateo Blanco - including the torrid affair he carried on with Lena (Penélope Cruz), his leading lady and also the mistress of the enigmatic tycoon (José Luis Gómez) financing his last film.

“In the end, I discovered that it was my love letter to the cinema, in many senses not as a director, but as a spectator,’’ says Almodóvar, whose influences include Hitchcock, Bergman, and Nicholas Ray. “Movies have enriched my life. Movies not only make us better, but make life less imperfect.’’

Like the multi-strand narrative of the film, the genesis of “Broken Embraces’’ was inspired by various sources, including a photograph that Almodóvar snapped almost a decade ago on a beach on the island of Lanzarote, where the lovers in the film escape to after their affair is discovered by the tycoon.

“When I developed the photograph, I discovered this couple embracing at the bottom of the image,’’ he recalls. “It really struck me, something about it affected me. I felt like there was a story to be told about that photograph, and it was a story that I was going to have to invent.’’

Almodóvar was also inspired by something far less romantic: the strenuous migraines he suffered from a couple of years ago, which required that he spend a lot of time in the dark.

“While I did that, I invented an alter ego, the character of Mateo Blanco, who gets to be blind because I spent so much time in the dark,’’ he says. “And I remembered always being fascinated about thinking of a character who’s a film director but has some kind of handicap.’’

While Almodóvar’s recent films may be more solemn than the fizzy comedies from early in his career, the director himself is charming, earthy, and effervescent, a big teddy bear with a silvery mane of hair who talks a blue streak - often in his own heavily accented English.

“Broken Embraces’’ marks Almodóvar’s fourth collaboration with Cruz, including “Volver’’ in 2006. He acknowledges that their partnership has become one of the most indelible of his career.

“There’s a Mexican song that goes something like, ‘Before I knew you existed, I thought of you. Before I met you, I had already guessed about you.’ And it was the same way with Penélope,’’ he says. “When that chemistry happens, it’s wonderful. But it’s always a mystery.’’

As a director known for celebrating the beauty and resiliency of women, Almodóvar has fostered productive yet often tempestuous mentor-muse relationships with actresses, from Carmen Maura to Marisa Paredes.

He acknowledges that the easiest thing to say about him is that he’s a great director of women, which he finds flattering. Yet he’s also written many strong male characters over the years, including those in “Live Flesh’’ (1997) and “Bad Education’’ (2004).

While Almodóvar is a rock star-like icon in Spain and throughout Europe, fans still approach him on the street and beg him to revisit the fizzy comedies of his early years. But in creating the sequences for “Girls and Suitcases,’’ the director realized that the roots to his past have been severed.

“It was very exciting for me to return to ‘Women on the Verge’ and to be able to re-adapt my own work and to find that I could reconnect with a certain iconoclastic tone from my past,’’ he says. “Yet if I tried to write a new script in the same tone, I realize that I just can’t access that tone fully. It really does belong to something in my past. And that’s something I don’t want to fight against.’’

The climax is both ridiculous and ridiculously romantic, which is an apt description of a work shaped like a heart and structured like a pretzel.
Your comment is subject to the rules of our Posting Policy
This comment may appear on your public profile. Public Profile FAQ