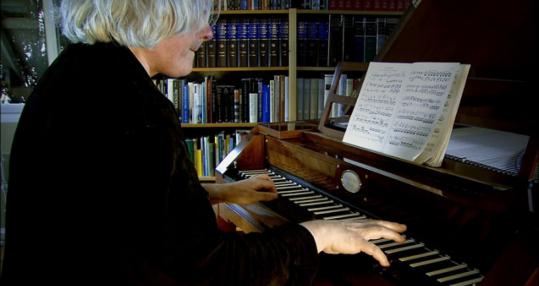 Ronald Brautigam, here on the fortepiano, is one of the performers who helps piece together the life and work of Beethoven. (Seventh Art Productions)
By Jeremy Eichler Globe Staff / January 6, 2010

Two-plus years after his last film, “In Search of Mozart,’’ arrived at the Museum of Fine Arts, director Phil Grabsky has returned with another smoothly delivered feature-length classical music primer called “In Search of Beethoven.’’ It opens today for seven screenings.

The “In Search of . . .’’ formulation might seem an odd choice for two composers at the epicenter of today’s classical music performance culture. You probably never realized they had gone missing. But these films aim to go below the surface of vague myth, anecdote, and received wisdom to convey a balanced sense of both biography and artistic achievement. They do that well. “In Search of Beethoven’’ tells the story of its subject in a clear, accessible, and gimmick-free manner while still preserving, or perhaps even cultivating, a core sense of wonder at the creative monuments he bequeathed to us all. Most importantly, Grabsky also knows when to proverbially dim the lights and allow the music to speak for itself.

Narrated by Juliet Stevenson, the film charts a straightforward chronological path through the composer’s life, quoting from his correspondence and tapping the expertise of musicologists and historians without getting bogged down in arcane details. Still, the highlights are the performances by many contemporary stars, including pianists Emanuel Ax, Leif Ove Andsnes, Jonathan Biss, Helene Grimaud, Lars Vogt, and (on fortepiano) Kristian Bezuidenhout; violinists Vadim Repin and Janine Jansen; and conductors Riccardo Chailly and Roger Norrington.

Musical excerpts are often extremely short but there are a lot of them, reaching beyond the greatest hits to touch on many of the symphonic and chamber music landmarks as well as the opera “Fidelio.’’ It’s also nice to hear the performers themselves rhapsodizing about the marvels of a particular work, or taking you inside a single phrase within, for instance, a late piano sonata, as Andsnes does, remarking on Beethoven’s deepening understanding of the acoustic properties of sound despite his complete deafness.

The editing is better than it was in the Mozart film, which clumsily used shots of contemporary European street life to illustrate readings of letters. Among the many scholars quoted, Cliff Eisen stands out for his lucidity. It’s fitting that he gets the last word in the film, ruminating on how, after Beethoven’s death, the aggressive originality of his works discouraged others from trying to follow his particular musical path.

You could of course have an entire film about Beethoven’s musical afterlife and his canonization, subjects that are among the many barely touched here. It also might have been interesting to hear some 20th- or 21st-century composers reflecting on their titanic predecessor. But Grabsky’s goal appears to have been more circumscribed: an introduction to the composer that speaks to both the classical newcomer and someone who has loved this music for years but pieced together its back story only from hundreds of disconnected program notes. It’s as if all those notes were here woven together into a single cogent narrative, punctuated by some delightful snippets of music.

IN SEARCH OF BEETHOVEN Directed by: Phil Grabsky

At: Museum of Fine Arts, today and various dates through Jan. 15