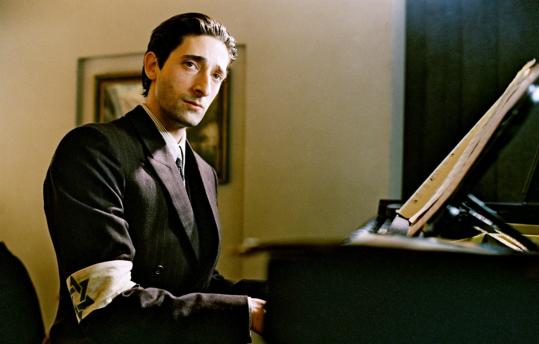 Look, I’m doing this with an imaginary gun to my head. Best movies of the decade and I only get to choose 10? My short list had 17, and it wasn’t even that great a decade. (The 1930s - now that was a decade.) All right, then: I’m paddling out to the desert island, making tough decisions as I go. Farewell, “Before Sunset,’’ that ode to the love that yammers on until it has to shut up. Goodbye, “Crouching Tiger Hidden Dragon’’ with your swooping Hollywood/wuxia fusion. Over the side with you, “Mulholland Drive,’’ the one David Lynch film that actually makes sense. The rest of you 10 can breathe easy - you’ve been voted on the island.

THE PIANIST (2002) - One man, a gifted musical cipher played by Adrien Brody, sits out World War II from the middle. More than a “holocaust movie,’’ even more than a “Roman Polanski film,’’ this is a great, harrowingly profound tale about the cruelties of history and absurdities of fate.

THE LORD OF THE RINGS: THE TWO TOWERS (2002) - Why not the whole three-film “LOTR’’ megillah? Because Peter Jackson hits his stride here after setting up the chessboard in “Fellowship’’ and before the exhausting multi-denouements of “Return.’’ Plus: Gollum rocks. fantasy at its most well crafted and epically assured.

SIDEWAYS (2004) - A difficult movie to love unless you, too, have been a middle-aged man or just know one all too well - then this smart, bilious buddy-film is funny enough to choke on. Paul Giamatti was a busy, busy man in the aughties, but this stands as his claim to the pantheon. (And it has the best Giant Naked Man scene in the history of the movies.)

I’M NOT THERE (2007) - Another tough one to love - sorry - but so is Bob Dylan. And Todd Haynes’s fractured fairy tale biopic is about why. Featuring six different actors playing Zimmy over the years, the movie specifically asks what we want from our pop stars and how one man tried to renege on the deal in order to save his soul. A critical document for a culture hung up on American idols.

SPIRITED AWAY (2001) - What, no Pixar? Yes, “WALL-E’’ and “The Incredibles’’ belong on the raft, but I have a soft spot for Hayao Miyazaki’s baroque environmentalist fantasies, and this is one of the most freaky yet controlled. There simply isn’t any other filmmaker working on the master’s level of primal narrative invention: “Spirited’’ feels like a dream decanted.

BORAT: CULTURAL LEARNINGS OF AMERICA FOR MAKE BENEFIT GLORIOUS NATION OF KAZAKHSTAN (2007) - The catastrophe of the smug, mirthless “Brüno’’ makes the comic achievement of the film that preceded it all the more impressive. Sacha Baron Cohen’s little Kazakh reporter is Chaplin turned inside-out, crisscrossing the country until the Americans he meets cry uncle in ways even they don’t expect.

4 MONTHS 3 WEEKS AND 2 DAYS (2007) - Of the many strong works to come out of this decade’s Romanian film renaissance, Cristian Mungiu’s quietly devastating abortion drama may be the strongest. Anamaria Marinca is unforgettable as a best friend who ascends to sainthood over the long haul of one long night.

MAN ON WIRE (2008) - You do know we’re living in an unparalleled era for nonfiction films, don’t you? So many choices, yet this documentary about Philippe Petit’s 1974 high-wire crossing of the twin towers accesses a greater wonder. It’s a portrait of poetic recklessness that reconstructs New York’s fallen innocence without ever mentioning 9/11.

THE NEW WORLD (2005) - The Pocahontas story, but not really. Terence Malick’s slow, majestic tone-poem is about the two Americas the first Europeans grappled with: the romance (embodied by Colin Farrell’s John Smith) and the reality (Christian Bale’s John Rolfe). Both love the chieftain’s daughter and all she represents (Q’orianka Kilcher), but only one actually sees her.

A SERIOUS MAN (2009) - Oh, come on, really? Isn’t it too soon to tell? Perhaps, but the Coen brothers’ hauntingly dark comic vision of one suburbanite’s encounter with the cosmic banana peel is as confidently crafted as “No Country for Old Men’’ and much more personal - and that is something new for the bros. So maybe I’m wrong. Ask me again in 10 years.