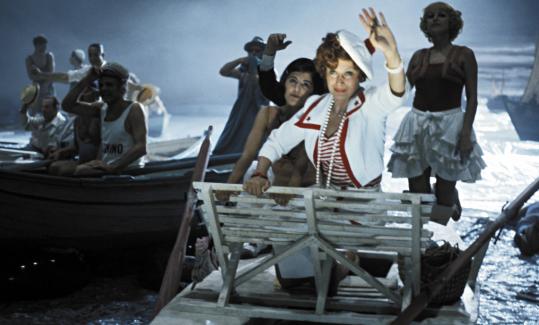 ‘Amarcord’’ is Federico Fellini in his high vulgar period. Originally released in Italy in 1973 and in the United States the following year, the movie continues to resemble something a lewd, grouchy, fitfully indecent silent-movie director might have made for his first time using color and sound. That, at least, would explain the shouting.

A fractured reminiscence set in a fictional seaside village during the rise of Italian fascism in the 1930s, the movie is Fellini’s childhood redrawn as a flatulent opus about how his town failed - tragically and comically - to resist the fascists’ pull. It’s a nightmare. It’s a daydream. It’s a comic strip. It’s a circus. The procession of tableaux veers from damning to amusing to exasperating. (It also won the foreign-language-film Oscar.)

The town in “Amarcord’’ is a version of Fellini’s own village of Rimini, caught between Catholic repression and political conscription. The best gags fill that void with satire, much of which is witnessed by or revolve around Titta (Bruno Zanin), Fellini’s randy adolescent stand-in. His father (Armando Brancia), a construction foreman, never misses an opportunity to have a conniption, whether the cause is Titta’s pranks or his workers’ dalliances with Volpina (Josiane Tanzilli), the town’s feral prostitute. The town idiot (Aristide Caporale) occasionally addresses the camera, as does the town’s lawyer (Luigi Rossi). They are only loosely distinguishable from each other.

Fellini’s director of photography, Giuseppe Rotunno, has supervised the film’s restoration. The new print isn’t as pristine as you’d hope. The movie still looks smoggy. But it’s the smog of memory. The title means “I remember,’’ and the movie has both heft and lightness, as if Fellini were remembering on the spot. He strings together assorted events (arguments, assignations, some business with a crazy uncle stuck in a tree) until you feel engorged with all the nuttiness.

“Amarcord’’ is stuffed, episodically, with the usual only-in-Fellini flourishes - an aside in which the idiot beds a harem, for instance. But there are flashes of Luis Buñuel’s surrealism and farce out of Mel Brooks, who had released “The Producers’’ and “The Twelve Chairs,’’ and whose genius was nearing its apogee. A giant talking floral arrangement done up in Mussolini’s image feels Brooksian. So does the sound of passed gas after someone extols Italy’s great works of art.

“Amarcord’’ would eventually license other directors to refract their comings of age through the prism of ambivalence: Woody Allen in “Radio Days,’’ Barry Levinson in “Avalon,’’ Spike Lee in “Crooklyn.’’ Fellini, of course, has extra disdain for youthful nostalgia.

In “Fellini on Fellini,’’ the director wrote about why Flash Gordon comic books meant so much to him as a boy. “When we began to read about the astounding adventures of this galactic hero,’’ he explained, “fascism was at its height, its dreary, gloomy rhetoric in full flood. Admittedly, fascism kept calling us to bravery and daring, kept telling us of the need to fight and win, but what it said seemed boring rubbish, and the heroes it set before us weren’t the least bit attractive.’’

That disenchantment is front and center in “Amarcord,’’ where both everything the fascists touch and everyone who wants to touch the fascists are made corrosively hideous. The result is a grand, passionate mess. The sense of decay almost disintegrates the art.

Written by: Fellini and Tonino Guerra