Time is of this film’s essence 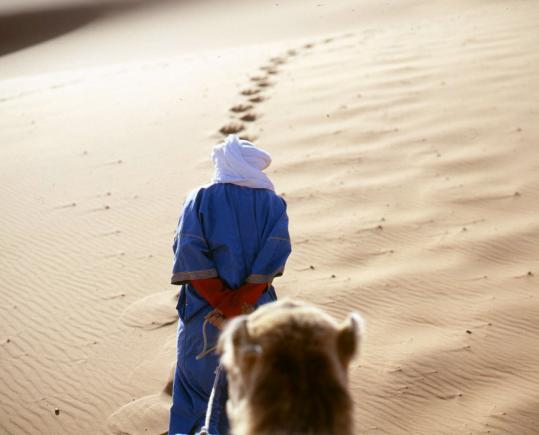 A tour guide speaks of the noise of the desert’s silence in “Bloody Mondays and Strawberry Pies.’’ ()
By Ty Burr Globe Staff / December 16, 2009

A poetic cinematic meditation on boredom sounds as if it would have to be . . . boring. Surprisingly, “Bloody Mondays and Strawberry Pies’’ isn’t. The Dutch filmmaker Coco Schrijber has handcrafted a rapturous, often profound visual essay about the metaphysics of time - about how we spend our lives fleeing from the silence of existence by filling our days with busy-ness. It’s a film to come back and touch in your thoughts for quite a while.

Using fluid pacing and some lovely visual rhyme schemes, Schrijber circles around a handful of subjects. A young German woman named Lena works at a baked-goods factory, glazing strawberry tarts and pensively wondering if this is where she’ll spend the next 30 years. There are interviews with 101-year-old Wall Street legend Irving Kahn and Nancy Wake, a dashing WWII British spy who is now an infirm 96. They have lived great lives that each acknowledges is turning to dust in the end.

In downtown Manhattan, a stockbroker named Golan lives from one cold-call to the next and can’t imagine resting for a moment; he and his Wall Street colleagues are presented as sleek, slightly sad sharks, forever moving forward, seeing only ahead. “Bloody Mondays’’ also drops into the Sahara for a visit with Moha el Boukri, a young tour guide who speaks of the noise of the desert’s silence and demonstrates how it can be obliterated by the sound of tourists straining to hear.

On the soundtrack, actor John Malkovich reads passages from Dostoyevsky’s “Notes From the Underground’’ and Bret Easton Ellis’s “American Psycho,’’ both key texts of the benumbed soul. By contrast, scenes with Roman Opalka, a Polish artist who since 1965 has been painting a series of canvases on which he’s inscribing numbers from one to infinity (he’s up to 5,547,394), offer the film’s most philosophically heady moments.

Strikingly, Schrijber begins “Bloody Mondays and Strawberry Pies’’ with news footage of the 1979 spree shootings by San Diego teenager Brenda Spencer, who famously said she did it because “I don’t like Mondays.’’ Ninety-odd minutes later, we’re watching the placid Spencer, now in her late 40s, at a parole hearing (denied). “Being here has taught me that I can enjoy my own company,’’ she writes to the filmmaker, and we’re invited to ponder how deeply that grace has cost her and others.

With patience and surprisingly few pretensions, in fact, “Bloody Mondays’’ builds a case for boredom as a necessary antechamber to spiritual grace. It is the place where we can, if we’re willing, begin to contemplate everything we devote entire lives working to avoid: our coming deaths, our present purposes, and so on and so on, into the painter’s tireless blue infinite.

At: Museum of Fine Arts, today through Dec. 20

In English, French, and German, with subtitles