The emperor's clothes, new and old 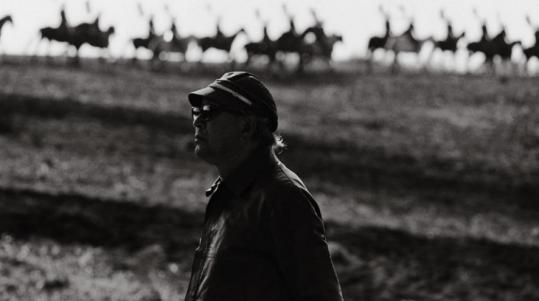 To celebrate Akira Kurosawa’s 100th birthday, which comes on March 23, 2010, the Criterion Collection has put out what must be the year’s most impressive box set, “AK 100: 25 Films by Akira Kurosawa.’’

Criterion has given the Emperor, Kurosawa’s nickname, some quite elegant new clothes: a linen-bound box, an extensively illustrated 96-page hardcover book, a handsome uniform design. Yet fine as the packaging is, it’s what’s on the discs that matters.

Is it even possible to imagine a history of film without Kurosawa in it? His achievement was that remarkable, his impact that powerful. It’s not just the masterpieces he directed - and “Ikiru’’ (1952) and “Seven Samurai’’ (1954), to name the supreme examples, are among the handful of greatest films ever made.

Kurosawa effectively introduced the world to Japanese cinema, thanks to the international sensation “Rashomon’’ (1950) created. “Seven Samurai’’ revolutionized action on the screen and, for good or ill, “Yojimbo’’ (1961) transformed the treatment of violence. Kurosawa’s 15 films with Toshiro Mifune - talk about a manly actor! - rank alongside John Ford’s with John Wayne and Josef von Sternberg’s with Marlene Dietrich as the most storied director-actor collaboration the medium has known.

What is more, Kurosawa’s films shaped directors as diverse as Sergio Leone, Sam Peckinpah, and George Lucas. No Kurosawa? No spaghetti westerns, no “Wild Bunch,’’ and a very different “Stars Wars.’’ R2-D2 and C-3PO are metallic versions of the scruffy peasant pair in “The Hidden Fortress’’ (1958).

Welcome as it is to have the fruits of Kurosawa’s major phase all in one place - the stretch of his career from “Rashomon’’ to “Red Beard’’ (1965) is one of the all-time directorial runs - the most notable feature of “AK 100’’ is its including Kurosawa’s first four films. None has been previously available on DVD in this country. They’re fascinating for how they do, and do not, prefigure the mature work to come.

“Sanshiro Sugata’’ immediately declares its director means business, opening with a long and fluent though unflashy tracking shot. The story concerns the struggle between judo and jujitsu in Japanese martial arts during the later 19th century. The movie was such a success a reluctant Kurosawa made “Sanshiro Sugata, Part Two’’ (1945).

The title character is a judo apprentice. As played by Susumu Fujita, he has the boyish-burly appeal of the young Brendan Fraser. His innate sweetness starkly contrasts with Mifune, who first worked for Kurosawa in “Drunken Angel’’ (1948). An iron fist wearing an iron glove, Mifune is the Japanese John Wayne: a monolith of masculinity and magnificence. Surely he has the fiercest scowl in film history. Magnificence does not modulate easily, though. Even in his most anomalous Kurosawa role, as an atomic-bomb-obsessed family patriarch in “I Live in Fear’’ (1955), Mifune overpowers the screen. He doesn’t so much chew the scenery as beat it up.

Nuance and shading are as alien to Mifune as they are to Wayne. His presence enriches Kurosawa’s work, but also limits it. So many of these movies are set in brutal societies - times of civil war or repression - but Kurosawa, and this is an important and troubling point, is at home in them. Brutality suits him. A natural aristocrat (descended from samurai, in fact), Kurosawa had minimal tolerance, if not outright contempt, for characters he considered unworthy.

In certain respects, Kurosawa had a richer artistic relationship with Takashi Shimura, who lent a humanity and emotional complexity too often lacking in Kurosawa’s work. Shimura plays one of the hero’s opponents in the first “Sugata.’’ He also appears, briefly, as a factory manager in Kurosawa’s next film, “The Most Beautiful’’ (1944). It’s a mark of Shimura’s phenomenal range that he could successively play the dying bureaucrat in “Ikiru’’ and the warrior leader in “Seven Samurai.’’ In its own way, Shimura’s bearing is as impressive as Mifune’s: a slowly shifting play of light as against Mifune’s ceaseless storm surge.

Each part of “Sugata’’ concludes with a fight on a mountain in extreme weather: a windstorm in the first film, the aftermath of a snowstorm in the second. Kurosawa is the movies’ unrivaled master of meteorology: mist and fog, wind (in “Yojimbo,’’ it’s practically Mifune’s sidekick), snow (cinema has no more moving image than Shimura sitting on a swing, softly singing amid falling snowflakes, in “Ikiru’’), heat and humidity (modern-day Tokyo swelters in “Stray Dog,’’ 1949, and “High and Low,’’ 1963).

Above all, there is rain. Kurosawa drew on Shakespeare for “Throne of Blood,’’ “Ran’’ (inspired by “King Lear’’), and “The Bad Sleep Well’’ (1960), which has elements of “Hamlet.’’ The deepest connection to Shakespeare is less overt. “The rain it raineth every day,’’ Feste sings in “Twelfth Night.’’ It could be Kurosawa’s theme song. What opening and closing doors are to Ernst Lubitsch’s films, or arguments to John Cassavetes’s, rain is to Kurosawa’s: a leitmotif that verges on raison d’etre. He loved the look of rain, its energy, its sound. He also loved its consequences. The climactic battle in “Seven Samurai’’ is, among many other things, a monument to the eloquence of mud.

In his 1982 memoir, “Something Like an Autobiography,’’ Kurosawa says that “The Most Beautiful’’ is the “dearest to me’’ of his films. That fondness owes something to the fact he married its lead actress, Yoko Yaguchi. Perhaps it’s also a case of opposites attracting. For his second film, this intensely masculine director presents a milieu almost entirely populated by women: a wartime optical factory whose workers are Japanese Rosie the Riveters. It’s like a through-the-looking-glass version of a Hollywood home front feature.

There’s an emotional artlessness to “The Most Beautiful,’’ a real charm - hardly a quality one associates with Kurosawa. What is characteristic, though, as well as a subtle foreshadowing of things to come, is the workers’ dedication being effectively an end unto itself. They exert themselves for the cause - but that cause seems almost abstract. Disdainful of Japanese militarism, Kurosawa had good reason to make the workers’ sacrifice seem to spring as much from their loyalty to each other as to the war effort. Yet throughout his work an abiding concern will be the simultaneous need for heroism and its moral limitation. Heroism increasingly blends into nihilism in Kurosawa’s films. He plays this for comic effect in “Yojimbo.’’ It’s a bitter joke, but at least it’s funny. By the time of “Kagemusha’’ and “Ran,’’ heroism is barely an afterthought amid the emptiness of human existence.

For Kurosawa, heroism is ultimately a formal exercise. Duty, honor, bravery exist for their own sake. The heroism of the title characters in “Seven Samurai’’ is presented in very nearly mythic terms. But they don’t protect the village out of some sense of commitment to the villagers. Rather, fighting is their calling - it’s what they do - and the villagers are the only available recipients of their nobility. What makes “Ikiru’’ stand out among Kurosawa’s films is that the heroism of Shimura’s character, trying to get a playground built before he dies, is for a human end.

The least interesting of the first four films, “The Men Who Tread on the Tiger’s Tail’’ (1945) recounts a historical incident from the 12th century when a group of samurai sought to pass through a checkpoint disguised as monks. Wartime restrictions meant Kurosawa had to shoot on a single set, and the film feels cramped and stagy. Worse, the samurai’s porter mugs with Jerry Lewis relentlessness (“Hey, sensei!’’).

What humor Kurosawa’s work has is usually so broad as to seem muscle-bound. “Sanjuro’’ (1962), the follow-up to “Yojimbo,’’ is the happiest exception. When people laugh in Kurosawa movies, they invariably laugh too hard. Needing to be so alert to physicality and timing, great action directors would seem naturals at comedy. Look at Howard Hawks. Kurosawa’s films argue otherwise. That’s all right, though. It’s one of the few arguments the Emperor ever lost.