Me and Orson Welles

‘Welles’ brings the legend of a towering figure to life 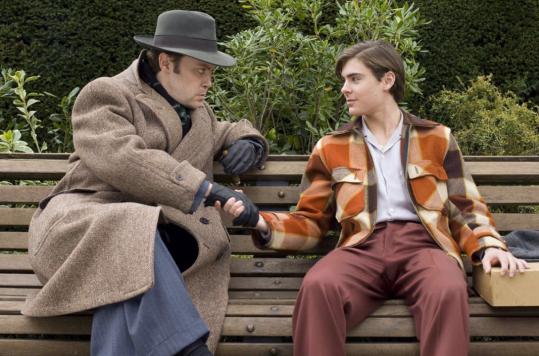 You may have heard that the “Orson Welles’’ part of “Me and Orson Welles’’ is a remarkable, even staggering, work of imposture. It’s all true: The British actor Christian McKay resurrects the young Welles as a magnificent mountain of talent, ego, and unsliced ham. He, and he alone, is reason enough to see this movie.

Contrary to what you may have heard or hoped, the “High School Musical’’ heartthrob actually acquits himself well as Richard Samuels, a 1937 New Jersey high school kid with Broadway stars in his eyes and the luck to fall in with Welles’s Mercury Theatre as they’re preparing the modern-dress production of “Julius Caesar.’’

Richard is callow and ambitious, brash and naive; he’s a bit of a user, too. Efron captures all of that . . . and no more. In a film full of sharpies, con artists, real artists, and tart-talking cynics of all stripes, Richard lacks the ironic edge that would believably keep him in this company without being left for dead. Efron holds the screen, and you do root for and admire Richard, but you keep waiting for something interesting to happen in his eyes, and it never comes.

If you can get past that (I can), “Me and Orson Welles’’ is a richly pleasurable bit of fabulated pop history, if not a lasting contribution to the art. Based on Robert Kaplow’s well-liked 2003 novel, it represents a stretch for director Richard Linklater (“Before Sunset,’’ “School of Rock’’), a period piece where every bit of dialogue is tilted sharply up against the next. It’s the opposite of a movie like “Slacker’’ - everyone here speaks with witty concision, and they never mean what they say.

Richard has the luck to wan der into the Mercury as Welles’s “Caesar’’ is stumbling toward opening night, and the film at its best captures the arch, wonderful chaos of backstage life. For those who know the era, there’s fun to be had in spotting the troupe’s ladies’ man Joseph Cotten (James Tupper), courtly and patient producer John Houseman (Eddie Marsan), neurotic matinee idol George Coulouris (Ben Chaplin).

There’s also the troupe’s girl Friday, Sonja (Claire Danes), a Vassar grad hankering for a meeting with David O. Selznick. She’s everything about Manhattan Richard wants and can’t quite have. (A girl like struggling writer Gretta, sweetly played by Elia Kazan’s granddaughter Zoe, is more his speed.)

Towering above them all - literally - is Welles, a man of titanic appetites (artistic, sexual, culinary) and the confidence to follow his muse while all around him are tearing out their hair. In truth the 35-year-old McKay is too old to play this particular Welles, who at 22 still had it all ahead of him: “War of the Worlds,’’ “Citizen Kane,’’ “Magnificent Ambersons,’’ ignominy, downfall, renewal, wine ads. The ruthlessness of gifted youth is missing, and don’t look to Efron to pick it up. (He has trouble even staying in period; when Richard sings, he sounds like a breathy Radio star.)

What McKay gets right is the voice, that resonant basso profundo with the devil deep inside it. The finest, funniest scene in “Me and Orson Welles’’ may be when Orson drags Richard along to one of the many live radio dramas he acted in to keep the Mercury afloat and bamboozles the other players by improvising a speech lifted from “Ambersons.’’ It’s the dexterity of Welles’s art and ego that McKay conveys - that and the joy of outfoxing everyone in the room.

The movie builds to a very nice approximation of the November 11, 1937 opening night of the Mercury “Caesar’’ - triumph pulled from the teeth of disaster - and then sputters to a warm but ordinary coming-of-age conclusion. Linklater may be one of our best working moviemakers, but a conventionally structured period film isn’t the best showcase for his talents. He likes entropy too much: the chaos of creation and colliding personalities.

Don’t go to “Me and Orson Welles,’’ then, expecting an epic re-creation of prewar New York. What we get is a few good blocks and the beautiful charlatans who worked there, and that’s more than enough for some of us.

ME AND ORSON WELLES Directed by: Richard Linklater

Written by: Holly Gent Palmo, based on a novel by Robert Kaplow