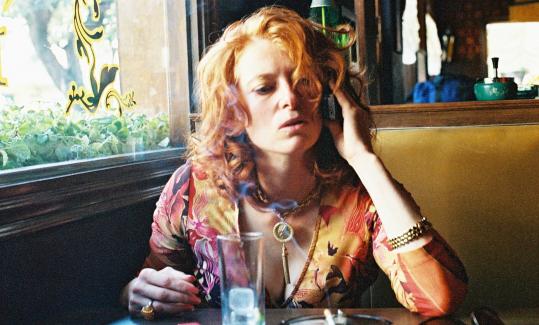 In “Julia,’’ Tilda Swinton plays an alcoholic who becomes involved in a plot to kidnap a boy. (Magnolia Pictures)
By Ty Burr Globe Staff / December 9, 2009

Clearly, any actor who dares to take on the title role in “Julia’’ - a self-destructive alcoholic enmeshed in a disastrously misconceived kidnapping plot - had better not be a shrinking violet. Tilda Swinton embodies the opposite tendency, though: She’s the cinema’s imperious Bird of Paradise flower, and in Erick Zonca’s white-knuckle character thriller, she comes close to uprooting the film itself.

When we first meet Julia Harris, she’s carousing with a group of businessmen during happy hour; the dawn’s ugly light reveals a far more pathetic picture. Fueled by a rage made up of equal parts self-loathing, bitter cynicism, and terror, Julia has no time for the 12-step platitudes offered by her sponsor Mitch (Saul Rubinek). She’s not a disaster waiting to happen - she is happening, right now.

Another member of the program, an emotionally unbalanced woman named Elena (Kate del Castillo), begs Julia to help her kidnap her 8-year-old son from his rich grandfather; out of work (again) and desperate, Julia decides to take matters into her own hands. The scenes in which she swoops in and spirits away young Tom (Aidan Gould) from a quiet woodland swim lurch with sudden, shocking danger. We don’t know how far Julia is capable of going and neither does she.

These sequences are borderline surreal - Swinton’s red hair flaming out from behind a black plastic mask - and they work only because the actress is so fearlessly unsentimental. Any other star would signal Julia’s softness, a coming redemption; would try to make us like her. Swinton is wired to push the other way; to make us not like Julia yet still feel compassion for her vivid, human flaws.

Zonca made a ravishing debut in 1998’s “The Dreamlife of Angels,’’ a less compelling follow-up (2000’s “Le Petit Voleur’’) and promptly dropped out of sight. Loosely inspired by the 1980 John Cassavetes film “Gloria,’’ this isn’t a return to form so much as a rebirth, in English, in Los Angeles, in hard-edged modern noir. The colors burn in “Julia’’ and the camerawork swoons and staggers along with the heroine, somehow managing to keep her in pitiless focus as the storyline tumbles across the Mexican border and into a series of violent, twisty showdowns with increasingly vicious men.

The movie’s electrifying without being completely satisfying. Zonca and his star don’t play by Hollywood rules, which is both good (keeps us off-balance) and less so (at times the film doesn’t seem sure where it’s going). If “Julia’’ has a weakness, ironically, it’s Swinton’s very strength: You may find it hard to believe a woman with resolve so steely could allow herself to have become such a hapless drunk.

She’s still a good enough actress - a great one, actually - to hold the film’s tensions together well past the two-hour mark, and she gets off a few monologues in which we see the terror of the once-bright barfly who can’t admit the party’s over. Still, Swinton’s a control freak playing a basket case, and that paradox barely makes it to the end credits alive.

Ty Burr can be reached at tburr@globe.com. For more, go to www.boston.com/movienation.

Written by: Zonca and Aude Py

At: MFA, today and various dates through Dec. 13