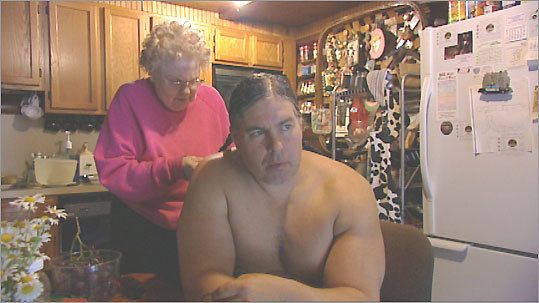 Stanley Pleskun (with his mother) is featured in "Strongman." (Courtesy of No Props Inc.)
By Wesley Morris Globe Staff / December 9, 2009

It’s fair to say that Stanley Pleskun and his girlfriend, Barbara, have a strange relationship. “Strongman’’ catches them in an emotionally codependent tangle. They’ve been sharing a small, cheap New Jersey apartment with her sister for the last couple of years, and Pleskun has almost had enough.

For half a year, he and Barbara let a documentary filmmaker into their lives. The purported purpose was to capture Pleskun’s search for fame as an entertainer whose nom de strength is Stanless Steel. Stan lifts trucks with his legs, raises a structure holding three adults using only a finger, and bends seemingly unyielding objects (pennies, horseshoes, pipes) with his bare hands. But “Strongman’’ is a sad, affecting love story between this Samson and his Delilah.

The nature of their relationship is never entirely clear, which isn’t a fault of Zachary Levy’s moviemaking - for the most part, he maintains an involving cinéma-vérité distance. The ambiguity stems from the likelihood Stanley and Barbara don’t always seem to know where they stand with each other.

Pleskun weighs about 270 pounds, appears to be in his late-30s or early 40s, and has the unintimidating voice of a man half his size. Barbara once was a shapely beauty. Now she speaks with a smoker’s rasp. Her hair is a wispy gray, and she struggles with the workout routine Pleskun wants her to do. She’s a shell of some former self.

If he has devoted his life to being Stanless Steel, she appears to have devoted her life to helping his dreams of fame come true. But Pleskun isn’t close. He stubbornly clings to his own ideas of what will bring him fame. He will not, for instance, cut his long graying hair.

You worry Levy might veer toward exploitation when Pleskun visits his family - he has a drunk, drug-addicted brother and an ancient, palsied grandmother, who’s wheeled out for one scene. They could all be characters in a junkyard opera by the filmmaker Harmony Korine. But Levy isn’t attracted to grotesquerie. His camera finds sorrow in many of its faces, especially Barbara’s. There is deep, searching unhappiness in her.

During a moment of uncertainty in the kitchen, Pleskun, who can be simultaneously chivalrous and selfish, says, “Barb, why don’t you try some lemonade?’’ She looks as though she still can’t believe the lemons life has given her. And yet Levy is determined to see her and Stan through to some kind of normalcy. By the end, you don’t entirely understand either of these people, but you come to understand why they need each other.

At: The Museum of Fine Arts

Unrated (language, drug use, and unusual feats of strength)