De Niro’s better than fine, the rest is sentimental 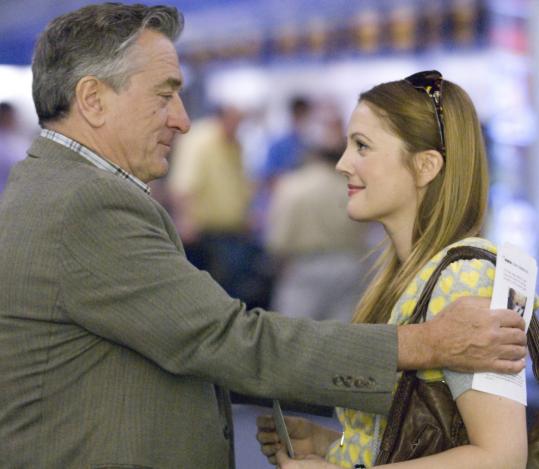 Robert De Niro is a father traveling across the country and Drew Barrymore one of the kids he visits in “Everybody’s Fine,’’ which is based on a 1990 Italian film. (Abbot Genser/Miramax Film Corp)
By Wesley Morris Globe Staff / December 4, 2009

It takes some effort to neutralize the charm of a modestly charismatic Robert De Niro performance. But “Everybody’s Fine’’ does a stupendous job. De Niro plays - humanizing name alert - Frank Goode, a widower crossing the country, by train and bus, to drop in on the four adult children who are too busy to visit him. Frank’s journey has been made under the assumption that we possess desperate hearts and strained carrots for brains.

Whenever Frank sees one of his kids or waits to see one, the score flares up like an orchestral rash. And as he regards them - three are played by Kate Beckinsale (Chicago), Sam Rockwell (Denver), and, best of all, Drew Barrymore (Las Vegas); the little-seen fourth, a son, is in trouble in Mexico - the movie keeps cutting to actual kids. This is stupid. We can tell from De Niro’s wistful expression what he sees in these grown-ups is the children they used to be.

Frank made his living coating America’s telephone wires in PVC, a chemical that’s now made him vaguely ill (his doctor urges him not to fly). And after he leaves one child to surprise the next one, the camera pulls right up to a drooping strand of wire, and we hear the siblings squawking away on their telephones about what do for the brother in Mexico and whether to tell dad.

Not even the 1990 Giuseppe Tornatore movie that “Everybody’s Fine’’ is based on was that shameless. The original had a lot of problems. It’s been almost 20 years, but I think audiences all over the world are still in sugar shock. Still, it also had the natural Italian landscape to traverse, Tornatore’s affecting ideas about the emotional downside of living too long a life, and a keen awareness of how to make the movie a meaningful showcase for its star, Marcello Mastroianni.

Kirk Jones (“Waking Ned Devine’’) wrote and directed this Hollywood version. And the sentimentality he glops on is meant to bring out the bittersweet nature of these relationships. But there’s something darker roiling untapped beneath this material. Have Frank’s high expectations made his family pathologically incapable of leveling with him? That pathology extends to Jones, who perfumes most of the scenes with some form of cuteness. The movie’s big confessional happens as a hallucination in which Frank cross-examines the young incarnations of his kids: You’ve all been lying to me! Suddenly, a cloying family dramedy turns into an episode of “Law & Order: Children’s Television Workshop.’’

Once it’s clear the movie won’t be deviating at all from its formula, Frank’s journey gets tedious. But De Niro handles himself with rare care. He’s spent most of this decade playing goons and grumps, so it’s heartening to see that he’s still interested in etching the contours of such a proud, ebullient, life-size character. Frank is a side of De Niro we’ve never seen. So there’s immense pleasure to be had in the sight of this great craftsman actor simply making googly eyes at a baby or waving his arms to trip a light sensor. He reminded me of the airborne codger in “Up.’’ This movie is a condolence card. His performance belongs somewhere better, in, say, a movie about a house lifted aloft by a giant balloon bouquet.