Playing a traumatized soldier whose life is unraveling, the intensely private actor reveals a darker side in ‘Brothers’ 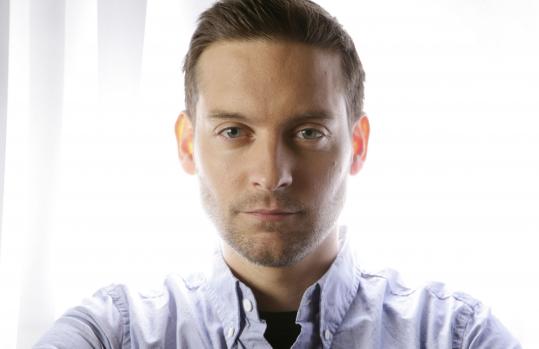 NEW YORK - In the blockbuster “Spider-Man’’ franchise, peeling back the mask of the spandex-clad superhero and his angsty young alter-ego Peter Parker is a famously Herculean task. Likewise, trying to crack the carefully cultivated surface of Tobey Maguire, the 34-year-old star who brought to life the web-slinging crime-fighter, proves no less a difficult a chore.

While Maguire is warm and charming in person - he talks about his work with both earnestness and a winking irony - he’s not especially forthcoming about what makes him tick. In interviews, he fiercely protects his privacy, offering up few illuminating anecdotes. He’s an avowed vegan, finicky eater, and avid yoga practitioner. He quit drinking when he was 19 because he didn’t like immersing himself in altered states.

Yet for his latest role, in “Brothers,’’ which opens Friday, Maguire was forced to let loose. He plays Sam Cahill, a US soldier returned from the war in Afghanistan who’s grappling with the harrowing trauma he endured while held prisoner by Taliban fighters. The film examines the effects of this psychic damage on Sam, his wife (Natalie Portman), children, younger brother (Jake Gyllenhaal), and parents (Sam Shepard and Mare Winningham). The role required Maguire to play someone who is deeply regimented in his military and family life, but who loses his moral clarity and sense of self after being subjected to torture in captivity.

“Tobey controls his life to a very exacting degree,’’ says “Brothers’’ director Jim Sheridan (“My Left Foot,’’ “In the Name of the Father’’). “He’s very de rigueur in his choice of what he eats as well as everything else. So for him to let go in playing this character was a very big deal. And in this movie, he has to let go an awful lot. For some of the more explosive scenes, when we walked out on the set, we didn’t know what Tobey was going to do next.’’

During an interview at a midtown Manhattan hotel suite, Maguire acknowledges that the role was both physically and emotionally draining.

“You’re working on the movie 12 to 14 hours a day, and then going home and preparing for the next day, memorizing lines, reflecting on what you did, and thinking about what you have to do the next day. It wasn’t easy,’’ says Maguire. “Put it this way: My wife told me I wasn’t much fun to be around for those few months.’’

Indeed, Maguire acknowledges that the intensity of film work can be taxing on family life. He and his wife, Jennifer Meyer, have two young kids, Ruby, 3, and Otis, who was born last spring.

“It’s always challenging. It does create tension [in the relationship],’’ acknowledges the actor. “But my wife, she understands, and we both do the best we can to get through those experiences.’’

As for the physical deterioration, Maguire shed 20 pounds in five weeks in order to play the malnourished soldier. He lowered his calorie intake to about 1,200-1,300 per day under a nutritionist’s supervision. Still, the actor is an old hand at losing and gaining weight for a role. He dropped about 25 pounds to play jockey Red Pollard in “Seabiscuit’’ and beefed up for all three “Spider-Man’’ films.

“I’m certainly accustomed to it at this point,’’ he says. “However, the extremity of this role in particular was very intense. I was on so few calories relative to the amount of exercise I was doing. If I stood up too quickly, my vision would go black, I would get faint, and I would have to grab on to something to keep from falling over.’’

Adapted from Susanne Bier’s critically acclaimed but little-seen Danish film, “Brothers’’ trains its lens on the close bond between Sam and his troubled brother, Tommy (Gyllenhaal), who finds new purpose in life after Sam is presumed dead in a helicopter crash. By the latter half of the film, after Sam has returned, the two brothers find themselves on opposite trajectories - one blossoming with newfound self-confidence, the other collapsing into jealousy, paranoia, and rage.

“I think Sam’s already separated emotionally from his family at the beginning of the film,’’ observes Maguire. “He’s going through the motions of being a proper family man, but I think his worldview has already changed. He can barely relate to his wife and his kids anymore.’’

To prepare for the role, the actor immersed himself in research on post-traumatic stress disorder - reading articles, talking to military doctors, visiting Camp Pendleton in California, and meeting with soldiers who had suffered through PTSD.

“People don’t like to talk about it because it’s like pulling back the curtain on another side of humanity,’’ he says. “The people who’ve gone through these things, there’s a different look in their eyes. They just know a different side of being a human. We can only imagine this stuff, but these people have been through terrible ordeals and have seen and lived through things that can change a person’s worldview.

“And our society isn’t really dealing with it,’’ he continues. “Hopefully this movie can spark some conversation and people will start speaking the truth about this stuff.’’

“Brothers’’ marks a departure for Maguire, who first rose to fame in the late ’90s at the same time that best bud Leonardo DiCaprio was becoming a mega-star.

“Spider-Man’’ made Maguire a household name in 2002. But before that, he was known for a series of wide-eyed, introspective character parts in such films as “Pleasantville,’’ “The Ice Storm,’’ and “Deconstructing Harry.’’ He played an orphaned young man who learns the harsh truths of life in “The Cider House Rules’’ and a troubled literary wunderkind schooled by Michael Douglas and seduced by Robert Downey Jr. in “Wonder Boys.’’ The actor’s expressive, crystalline blue eyes captured the heartbreak, loneliness, and alienation underlying each of those characters.

“Brothers,’’ though, required him to tap into unsettling emotions that audiences have rarely seen from the actor before. As the scarred and brutalized man who’s returned from Afghanistan, Maguire’s hooded eyes stir with disarming menace and volcanic intensity.

“Tobey has a real everyman quality - he’s like an electric Jimmy Stewart,’’ says Sheridan. “He appears like a swan on the surface, and the audience likes him and trusts him. But there’s a real [expletive] edge to him as well. . . . In close-up, you can tell there’s a lot going on in his head, but he’s a bit of a poker player because you’re not exactly sure what he’s thinking.’’

Despite a reluctance to reveal too much of himself in interviews, Maguire exhibits a pronounced playful streak during a photo shoot. Clad in dark jeans, crisp blue oxford, and black sneakers, with stubble marking his still-boyish face, Maguire flashes the photographer a look of mock indignation when she teases that he can go back to being “dorky’’ after she snaps some more moody shots. Later, he briefly feigns a sexy pose and starts talking in a Borat voice.

As for his decision to don the Spidey suit for a fourth (and possible fifth) installment, early reports after “Spider-Man 3’’ was released indicated Maguire was ready to hang it up. The actor, though, denies there was any hesitancy on his part.

Perhaps Maguire is loath to give up such an iconic role, especially since he and director Sam Raimi fought so hard to land him the part in the first place. (Recall that studio chiefs had originally preferred more chiseled young stars like Heath Ledger or Jude Law to play the web-slinger, and they even made Maguire submit to two screen tests before casting him. Then, once he was signed, the fanboy universe claimed he wasn’t charismatic enough to carry it off.)

Maguire, of course, proved them wrong. But he insists allegiance to the role hasn’t factored into his decision this time around. Instead, he needed to feel there was a fresh story about Spider-Man worth telling.

“Hopefully I’ll be able to evolve the character in a new direction,’’ he says. “He’ll still be Peter Parker, but I hope I can move him forward a bit and take him to a place where there will be new challenges for me as an actor.’’