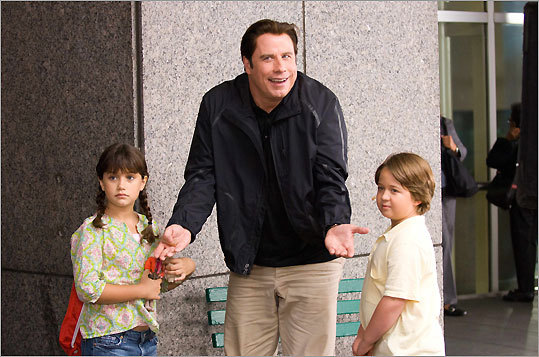 It wouldn’t be Thanksgiving without a turkey, and in “Old Dogs,’’ we have the season’s blue-ribbon gobbler. A pitiful family comedy about two aging buddies forced to play daddy, it looks exactly like what you’d get if Robin Williams and John Travolta went out, got hammered, scrawled scenes on a bar napkin in random order, gave the napkin to “Wild Hogs’’ director Walt Becker, and filmed it. Trust me, you could do this at home and save yourself the $9.50.

The stars play Dan (Williams) and Charlie (Travolta), childhood pals now running a successful sports marketing company. (Travolta’s hairpiece plays itself.) They’re cut from the odd-couple mold: Dan’s a repressed fussbudget, Charlie’s the good-time, uh, Charlie. The nonsensical plot begins when Dan’s ex-wife (Kelly Preston, a.k.a. Mrs. Travolta) from a one-day Vegas marriage turns up with 7-year-old twins he didn’t know were his (Conner Rayburn and Ella Bleu Travolta), announces she’s going to jail - for two weeks! for eco-terrorism! - and leaves the kids with the boys.

“Old Dogs’’ then veers from one flatly filmed, crassly comic sequence to the next with so little regard for connective logic that it’s practically avant-garde. The kids want to go camping? Cue the stars in Boy Scout uniforms harassed by Matt Dillon and Justin Long as psycho troop leaders. Dan’s not able to relax around his children? Charlie shows him how it’s done via a remote-controlled puppet suit. Who wrote this thing - Wile E. Coyote?

If “Old Dogs’’ isn’t the absolute worst movie either star has appeared in, it’s close enough to count. No crotch goes unpummeled here, no supporting actor misused. The lovely Lori Loughlin is bizarrely cast as a translator who asks Charlie on a date to her bereavement group, which is led by Ann-Margret nattering on about a rhubarb pie. Rita Wilson turns up as a cross-eyed hand model. The stars end up stuck in a gorilla enclosure with a shrieking Seth Green and a guy in an ape suit. It’s the drugs, I tell you.

At least Travolta got to spend a working vacation with his wife and daughter; that still doesn’t mean we have to pay for it. “Old Dogs’’ has the feel of a project that was made in a spirit of collegial fun and finished in a rush of desperation, with digital effects Ella Bleu must have done on her Polly Pocket computer.

You get a sense of how long the movie has been sitting on the shelf when Bernie Mac, dead these 15 months, shows up as a magician. The studio, Disney, may have delayed the release of “Old Dogs’’ out of respect for the deceased comedian, or out of respect for Travolta after the death of his son earlier this year. That’s very sensitive. If they had any respect for audiences, they might never have released it at all.