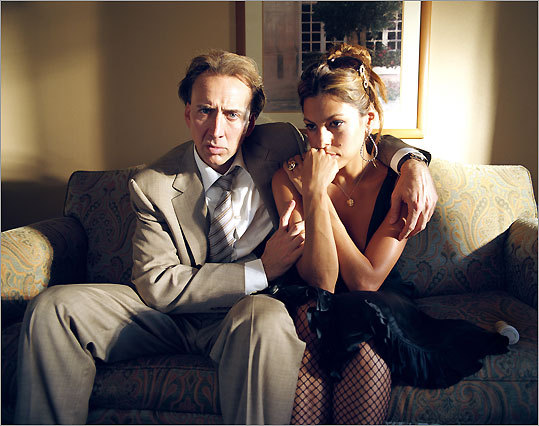 It starts with the Vicodin for his back, which he injured rescuing an inmate during Hurricane Katrina’s rising floodwaters. Then there’s the coke before entering a crime scene, and the crack while having sex with a woman in a parking lot.

That bad back has Detective Terence McDonagh stooped and dragging his feet in a Lon Chaney sort of way. His eyes pop off his long gaunt mask of a face as though he were Bela Lugosi. And every line of dialogue is delivered in snarling derision or exclamatory rage, like, well, Nicolas Cage, who thoroughly inhabits the character’s exhilarating madness in “Bad Lieutenant: Port of Call New Orleans.’’

Woe to the pharmacist who keeps McDonagh waiting for a prescription. Pity the elderly woman on a respirator who dares obstruct his investigation. (He’s got a thunderbolt of conservative talk-radio fury for her.) And shame on us for letting this nutty performance draw us so close.

Under Werner Herzog’s direction, the days spent in McDonagh’s company are steadily, comically harrowing. He’s trying to solve the murders of a house full of dead Senegalese. He has to deal with his alcoholic father (Tom Bower) and his father’s quasi-alcoholic girlfriend (Jennifer Coolidge). There’s money to lose on college football games, an assortment of narcotic cocktails to snort and smoke, and seedy johns to chase away from his luscious hooker girlfriend (Eva Mendes, sharper than she’s ever been).

As time passes, McDonagh’s delirious insobriety exposes the worst in his humanity but the best in both Cage and Herzog. Their pairing is about as perfect a meeting between a director’s sense of mischief and an actor’s license to misbehave as a moviegoer could hope for. And it’s perfect that they’ve teamed up for a movie about a deviant cop. They’ve built their careers out of breaking laws.

The landmarks in Herzog’s work - among them, “Aguirre: Wrath of God’’ and “Fitzcarraldo’’ - amount to a muscular consideration of man’s limits in the scheme of nature’s awesome limitlessness. The men either went crazy or were crazy to start with. Sometimes that man was Herzog himself. Crazy, of course, is what Cage does more robustly than anyone else. He’s an ideal successor to the actor Klaus Kinski, whose pathological relationship with Herzog brought out wonderful things in both of them.

Here, Herzog is working from a screenplay by William Finkelstein that bears only a nominal resemblance to Abel Ferrara’s 1992 magnum opus of the same name. The first film was set in New York and had a once-in-a-lifetime performance by Harvey Keitel. Ferrara wanted to explore the wish to be saved from the spiritual crush of iniquity. Herzog goes only half that far and isn’t interested at all in redemption. He’s planted his cop in a city that feels open to a little insanity.

Herzog locates a surreal juncture where the toll of McDonagh’s vices meets New Orleans’s natural otherworldliness. This is how you explain one sequence in which a dead man’s soul break dances and another in which it looks as if a real iguana is belting out Johnny Adams’s “Release Me.’’ The director is determined to make you think you’re high and dreaming. Which is what I must have been when McDonagh happens upon two college-age kids, a man and a woman, whom he suspects have drugs. A routine bust turns into an ecstatic, crack-fueled piece of theater, in which the woman somewhat eagerly winds up serving McDonagh drugs and sex while her poor friend is forced to look in astonished bewilderment. If there’s a scene of more sublime luridness in a movie this year, I haven’t seen it.

Ultimately the movie’s procedural elements don’t seem to interest Herzog much. When the story turns toward the murder investigation it drags. Frankly, the story isn’t remotely as interesting as Cage. Nothing is. In Ferrara’s movie, Keitel emptied himself out. But there’s a hellion’s joy in Cage’s cop. What makes the actor such a source of vexation is that it’s impossible to reconcile whether he’s pulling our leg in junk like “Bangkok Dangerous,’’ “Ghost Rider,’’ “Next,’’ and “Knowing.’’ The real Cage stands up in all of them, even as you wish he’d sit down. “Bad Lieutenant’’ puts Cage back in the operatically deranged mode of “Moonstruck’’ and “Vampire’s Kiss.’’ He and Herzog give us what too few movies have the gumption to show: two lunatics howling at the moon.

Written by: William Finkelstein, based on the movie by Abel Ferrara

At: Boston Common and Coolidge Corner

Rated: R (drug use and language throughout, some violence and sexuality)