Serving notice about the casualties of war 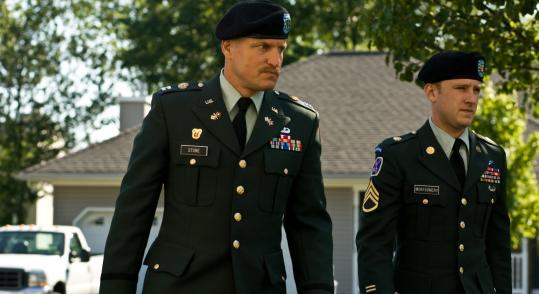 In “The Messenger,’’ Woody Harrelson (left) and Ben Foster are a captain and staff sergeant who deliver news of soldiers’ deaths to significant others and parents. (Oscilloscope Laboratories
)
By Wesley Morris Globe Staff / November 20, 2009

I’ve worried before that it might be too soon for movies about our current wars. They’re too fresh to get a dramatic grip on either the conflicts or what provoked them. What many filmmakers have produced were tracts that cast a skeptical eye. But, as it turns out, the proximity wasn’t the problem. It was the point of view. Americans have been in Afghanistan and Iraq for most of this decade, and in the last two years or so a number of smart, powerful movies - “The Lucky Ones,’’ “The Hurt Locker,’’ and, to some extent, “Stop-Loss’’ - have focused not on the wars, per se, but more dispassionately on the soldiers and their functions in the military.

In “The Messenger,’’ a forcefully acted and peculiar emotional drama that opens today in Cambridge, we ride shotgun with Staff Sergeant Will Montgomery (Ben Foster) and Captain Tony Stone (Woody Harrelson) as they inform loved ones that their child or significant other has died in battle.

Montgomery and Stone are part of the Army’s casualty notification team. The younger man, Montgomery, has been assigned to the post for the remaining three months of his service. He’s a decorated war hero who saved the lives of fellow soldiers in Iraq. The healing scar around his left eye looks, for what it’s worth, like one of those Jesus Fish. He tries to beg off the assignment - how on earth am I qualified for such a job, he asks. Indeed. Nothing about Montgomery’s hard young eyes, tight face, and intense demeanor says, “My condolences.’’

Bald and mustached, Stone served in Desert Storm but never experienced combat. He could have been any of the war-starved Marines in the underrated 2003 movie “Jarhead.’’ Now Stone excels at notification. Harrelson introduces this character with the rigidity and sternness of Robert Duvall in his commanding officer, “Great Santini’’ mode. Over lunch, Stone explains the many facets of casualty notification protocol, one of the most important being don’t touch the next-of-kin, or, as he puts it, the NOKs. He asks Montgomery if he’s a head case and hands him a pager, which could go off most hours of the day or night.

The notifications themselves are heavy, explosive encounters, each a doozey in its own way. It takes only a second sometimes for the NOKs to know why Montgomery and Stone have arrived. The sight of these two grave-looking men in their uniforms is an immediate giveaway. In one scene they park their car near a playground (the movie was filmed on and around Fort Dix in New Jersey), and as the camera follows them to their destination we see a playground fence lined with nervous-looking women.

But the movie, which Oren Moverman directed and co-wrote with Alessandro Camon, devotes itself more to the notifiers than the notifications themselves, and opens into a strange universe of lonely downtime and boredom, in which we see, in particular, how Montgomery copes with post-traumatic stress - punching holes in the wall, throwing darts in his underwear, blasting heavy metal in his drab little apartment.

Stone reveals an unexpected needy side, calling up Montgomery in the middle of the night with random inquiries (“You have IM?’’). Montgomery pursues a relationship with one of the widows (Samantha Morton) he had to notify. Morton gives this woman grace and guilt and anger. One long, sensually choreographed scene in the widow’s kitchen between her and Foster has the characters try to negotiate the propriety of their attraction.

Montgomery and Stone, meanwhile, carouse and cavort. Their off-duty relationship amounts to a lost, “Last Detail’’ bender that culminates in their trashed arrival at the wedding rehearsal dinner of Montgomery’s ex-girlfriend (Jena Malone). Foster brings all his weird impulses to this performance - cockeyed glances, intimidating eye contact, a roiling rage. He always leaves the door open for a meltdown. What’s exciting about Foster is that anything is possible with him, in the same way it was with a young Nicolas Cage.

The actor seems liable to self-destruct here, but you always sense that military service, as difficult and as damaging as it can be, is a kind of restraint. The scenes between Montgomery and Stone in plainclothes would seem to be tangential to Moverman’s movie, but they’re very much its point. Only in uniform do these men make sense to themselves.

Written by: Moverman and Alessandro Camon