‘Planet 51’ is hardly worth the visit 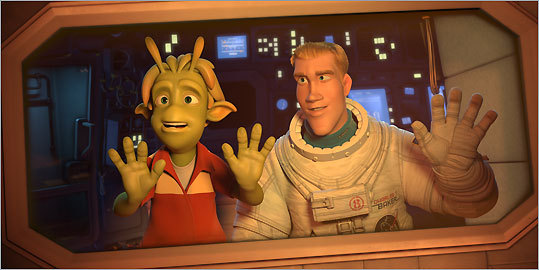 As a wise frog once remarked, it’s not easy being green. Not only are the emerald-colored extraterrestrials in “Planet 51’’ terrified by the appearance of a human astronaut on their home turf, they’re imprisoned in a cruddy, reductive version of “Happy Days’’ and forced to spout inane dialogue. Young children and adults with high pain thresholds will enjoy the movie during its brief pause on the way to your On Demand menu.

The planet of the title is home to a complacent race of noseless humanoids who speak English and whose culture has made it up to the “Grease’’ era of drive-in restaurants and cheesy sci-fi invasion movies. When an actual rocket ship comes to ground, the inhabitants panic, sending cocky American Chuck Baker (voiced by Dwayne “The Rock’’ Johnson) running for cover. He’s taken in by teenage misfit Lem (Justin Long), who hides him from a warlike general (Gary Oldman) and a mad scientist (John Cleese) after the human’s brain.

“Planet 51’’ is a cargo-cult movie - a piece of pop-culture flotsam that exists by scavenging pieces of other, better films. The astronaut has a pet robot that should fascinate Pixar’s lawyers: It’s an uncanny fusion of WALL-E and Eve. There’s the expected visual call-out to “E.T.’’ (silhouettes against the moon) and pet dogs that are peppy, pint-size versions of the beast in “Alien’’ (the best gag in the movie). As a whole, “Planet 51’’ plays like a debased inversion of “The Day the Earth Stood Still,’’ the 1951 original of which is still probably the best first sci-fi movie for kids.

This telling is fast, shiny, short, and cheerful, and it does give small minds some cultural relativism along with their popcorn. (Wait, who are the aliens here?) It’s also obnoxiously written, with too many cutesy-dirty double-entendres that are meant to appeal to the grown-ups but that only make the movie seem cringingly infantile. Screenwriter Joe Stillman worked on the first two “Shrek’’ movies, but his more telling credit may be “Beavis and Butt-head Do America.’’

“Planet 51’’ is most interesting as an attempt by the Spanish CGI company Ilion Animation to bootstrap its way into the big leagues by hiring Hollywood talent to write the script and perform the roles. The actors are all perfectly adequate (though I’d love to know what went through Cleese’s head), but no one at or DreamWorks Animation will lose sleep after seeing the brightly cluttered visuals here. You can’t buy wonder, and without it “Planet 51’’ is just one more throwaway toy.