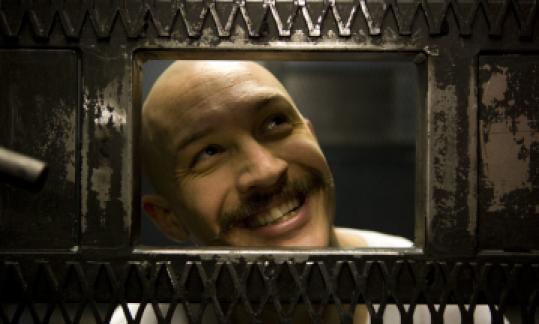 ‘Bronson’’ bills itself as the story of Britain’s most notorious living prisoner, Michael Peterson, who early on in his 35 years in jail - 30 of them in solitary confinement - gave himself the “fighting name’’ of Charles Bronson, after the Hollywood star of “Death Wish.’’ Really, though, “Bronson’’ isn’t a story in the traditional sense at all. It’s a meditation on the art of rage - an action painting passing itself off as an action movie.

Does it work? On one hand, the film’s a brutally stylized piece of work that confirms Danish-American director Nicolas Winding Refn’s talent and delivers unto us a star in actor Tom Hardy. On the other hand, you come out of “Bronson’’ knowing as much - or as little - about the man as when you went in. That may be the point. It also may be a cop-out.

One thing’s certain: Hardy’s “Charlie Bronson’’ is a terrifying, charming, altogether mesmerizing individual, a man you’ll be thankful is locked up. Peterson sidesteps the sociopath’s standard resume: He’s not the product of a broken home but a comfortable middle-class youth in Luton. He just likes to break things. Over other people’s heads.

A post-office robbery netted him about 26 British pounds and a seven-year stretch. Prison, he coolly remarks on the soundtrack, “was a place where I could sharpen my tools.’’ Peterson’s penchant for taking down five or six guards with a berserker’s glee turned his sentence into an ongoing eternity. At one point he was institutionalized. At another point, out of sheer desperation according to the film, the government released him to the streets. He was soon back inside, where even he knew he belonged.

“Bronson’’ is interesting not so much for this history as for the way it’s given to us. With his shaven pate and natty handlebar mustache, Hardy’s Peterson is like an Edwardian dandy dragged into the skinhead era, but it’s the man’s unsettling poise - his sense of large and omnipresent threat - that makes him a legend. Refn and his co-writer Brock Norman Brock envision their antihero as a truly binary man, one who toggles between the two settings of chilly calm and unimaginable ferocity.

Comparisons have been made to “A Clockwork Orange,’’ especially when “Bronson’’ was released in Great Britain last March, and at times Refn seems to court the parallel. Peterson’s voice-over narration, precise and profane, is an obvious nod to Alex the Droog, and the soundtrack is filled with the triumphal pomp of 19th-century Europe’s greatest hits: Wagner, Verdi, Bruckner. This is what Peterson hears in his head - his own private Gotterdammerung.

“Bronson’’ is mostly a tale of modern celebrity, though, and Peterson knows it, narrating his life story in whiteface to a shadowy theater of the mind. At the same time, Refn does something curious: He keeps the audience inside the jailhouse walls too. The movie’s a hermetic world of guards and hostages and effeminate fellow prisoners. A weirdly artful strain of homoerotic menace pulses through “Bronson,’’ as if Refn were filtering everything through a sexualized jailhouse pecking order, one in which Peterson, at times nude and covered in grime and blood, becomes a rampant god of wrath.

Why is this man so damned angry? That’s the central mystery, one the movie’s ultimately content to leave unsolved. “A Clockwork Orange’’ was a film (and a book) with a moral - we do away with free will at our peril. “Bronson’’ is of the opinion that morals are for sissies and that to understand Michael Peterson is to diminish him. Perhaps. And perhaps that just lets everyone involved off the hook.

Written by: Refn and