As Jacob Black in the new ‘Twilight’ film, Taylor Lautner is ready for the attention and the hysteria 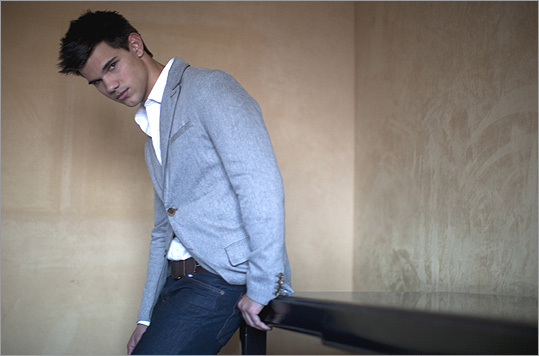 LOS ANGELES - Make no mistake. The boy is buff. But Taylor Lautner is human-scale fit. In real life, there’s not a touch of vampire-slaying werewolf to him. His pecs do not protrude until it’s impossible for them not to burst through his shirt.

What the flesh-and-blood Lautner does share with his onscreen persona Jacob Black is: 1. Really white teeth and 2. A polite earnestness that is in exact proportion to his age, which is 17 (and, yes, he does say, “almost’’ about being 18). It’s a heady thing to have adults hanging on to your every word - and pre-teen and teenage girls screaming your name - but Lautner appears to be handling his sudden fame with style.

Maybe that’s because it was expected. “Twilight,’’ the first film based on Stephenie Meyer’s hugely popular book series, made sensations of moody vampire Robert Pattinson and mopey love interest Kristen Stewart. Now it’s Lautner’s turn. In “The Twilight Saga: New Moon,’’ opening Friday in Boston, he’s the newcomer with tons of screen time. He’s the one without his shirt on a huge chunk of that time. He’s even on the movie poster, hunkily sandwiched smack between his superstar costars.

Invoking one of his pet affirmatives - “Absolutely’’ - Lautner says, “Absolutely it’s new for me. I don’t think you can prepare for it. There’s no preparation for this franchise. The funny thing is none of us expected it. When we were filming ‘Twilight,’ we thought we were just making a movie for the fans to enjoy. We didn’t expect anything like this out of it. We were just blown away. It’s a different world.’’

And now, after gaining about 30 pounds of serious muscle, after downing more protein shakes than he can recall and carrying little baggies of food with him everywhere, after so many hours in the gym he began to lose weight and had to cut back, he’s getting the kind of attention that only teenage girls can give: Enthusiasm bordering on hysteria, and lots of it. Sometimes to the point of frightening the young men who star in the film, where they are playing either centuries-old vampires or native Americans who transform into werewolves to kill the vampires when they trespass on their lands.

“Absolutely it’s hard,’’ Lautner says of navigating the real world these days. “It all depends where you choose to go. Movie theaters and malls aren’t the best places to go. It is [scary]. But it’s great to know you have all those fans and all that support behind you. It may [frighten you] at first, but it’s their way of expressing their passion for you and the series. We’re definitely thankful to have them behind us. That’s our driving force.’’

Lautner, in dark jeans and a light gray blazer, his hair heavy with gel, can sound preternaturally adult that way. Then again, he’s been in the business for some time. The Grand Rapids, Mich., native has been acting since he was 7 and his martial arts instructor persuaded him to audition for a fast-food commercial. He didn’t get the part, but he did get hooked. Three years later, his entire family relocated to Los Angeles so he could keep at it.

Soon enough Lautner was booking TV roles and voice-over work. Then at 13 he got his first big break: Being cast as Sharkboy in Robert Rodriguez’s 2005 “The Adventures of Sharkboy and Lavagirl 3-D.’’ That same year he won the role of Eliot, the son of the Bakers’ rival, in “Cheaper by the Dozen 2.’’ But he was just another skinny kid back then - albeit one who was a world karate champion and avid football player. Now he’s in an entirely other league. That’s his face staring out from a Sweethearts Forbidden Fruits candy box at Blockbuster; that’s him shirtless and tattooed on the back for the movie.

Director Chris Weitz inherited the main cast, and Lautner says he promised Weitz he would know the part and look the part. But Weitz, in an e-mail exchange, says what impressed him most wasn’t Lautner’s physical transformation but his ability to play a boy/werewolf as an actual human being/supernatural creature - and to maintain the same level headedness in the face of sudden fame as his costars did before him.

“Taylor’s physical growth doesn’t really matter,’’ Weitz says. “What mattered was that he was able to expand into the character, and lend him nuances of both sweetness and real anger. . . . I think there will be a lot of conversions to ‘Team Jacob.’ ’’

As Jacob Black, Lautner plays a member of the Quileute tribe of Forks, Wash., where the novels and movies are set. “New Moon,’’ shot mostly in Vancouver, British Columbia, continues the story of a teenage girl named Bella Swan who has fallen for reluctant vampire Edward Cullen. When he leaves her, the good-natured Jacob gently makes his move, using his skills at rebuilding motorcycles, toothy smiles and that killer body to get her attention. Oh, and waist-length black hair that’s actually a wig Lautner loathed. (“Absolutely not, I would not want that hair,’’ he says. “No, no way. When I looked at myself in the mirror I couldn’t even recognize myself.’’) Fortunately he gets to lop it off halfway into the film; werewolves are hairy but not long-haired, apparently.

The movie pits Edward and Jake against one another in more ways than one, and online the competition is now between “Team Jacob’’ and “Team Edward.’’ The story naturally appeals to girls. But in between the kissing and mooning for lost love, there’s plenty of vampire-on-vampire and werewolf-on-vampire action for the guys. Lautner’s character is just one of the teenagers who do battle on behalf of their tribe, and he says he found the story so compelling that he actually read all of the books in the series, surprising even himself.

“As a matter of fact, I was not a book reader at all,’’ he says without a trace of self-consciousness. “The only books I ever read were the ones I was forced to in school. But when I started reading this book series, I fell in love with the characters and started turning the pages one after another. It was crazy. I never thought I could do that. But I love this story. This franchise has everything in it: Romance, obviously, action, suspense. It has a dark side to it. I definitely think it’s a movie for everyone.’’

It also has a built-in audience and fan base for Lautner, who knew going in that if a second movie was made he would be one of its stars. So after “Twilight’’ wrapped, he got himself a trainer and started building the body that gets shown off plenty in “New Moon,’’ where, for some reason, none of the wolf boys wear shirts while hanging out together as humans. Eventually he went from a man’s small in clothing to a large, a size he is struggling to maintain while promoting the movie worldwide. Having the metabolism of a teenager doesn’t help, either.

But the movie wasn’t just about the physicality, Lautner says. The characters and their relationships change and grow in the second installment, and director Weitz (“The Golden Compass,’’ “About a Boy,’’ and “American Pie,’’ the latter two as co-director with his brother, Paul) talked often with the cast about the script, he says. Still, no one had any intention of altering the beloved book series.

“We don’t really want much say’’ in character development, Lautner says. “We’re just trying to live off the books. So it’s not like we want to change the characters at all. The fans are passionate about the book and all they want is those words on the pages brought up on the screen for them to watch. We want to stay as close to the books as possible.’’

Lautner apparently recognizes where success lies. And he clearly senses it coming his way. Next up is “Valentine’s Day,’’ a romantic comedy for director Garry Marshall whose cast is a veritable who’s who of Hollywood (and includes the other Taylor, singer Taylor Swift, who happens to be Lautner’s rumored girlfriend). Still, paparazzi aside, Lautner says he’s trying to keep it as real as he can for as long as he can.

“It’s important to maintain as much normalcy as possible,’’ he says. “Staying true to yourself and spending time with the people you did before, your family and friends. But sometimes it’s hard and you definitely have to make adjustments. Absolutely.’’ 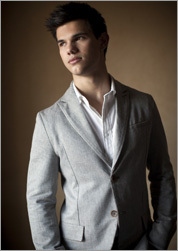