‘The Maid’ is untidy, in a good way 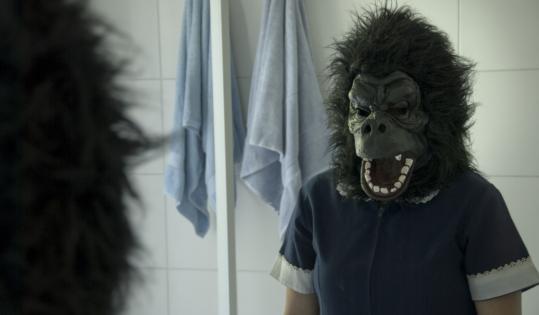 The unsettling Chilean drama “The Maid’’ opens with deceptive simplicity. In an upper-class kitchen in the suburbs of Santiago, a blank-faced, middle-aged maid (Catalina Saavedra) sits down to dinner. On the soundtrack we hear the family for whom she works bicker and snipe at each other in the adjoining dining room. The maid looks up, meets the camera’s gaze for a moment, looks away. It’s like peering into the abyss: All we see are darkness and unknown depths.

The family calls her in to surprise her with a birthday cake: Raquel is 41. She nervously sits down to have a piece of her own cake, then hastily clears the table. Later, in her room, she’ll examine the expensive sweater they’ve bought her and throw it on the floor.

Everything about the relationships between the bourgeoisie and their help is here: the barriers, the assumptions, the good intentions, the endless things unsaid. “The Maid’’ stirs them all into a creepy, nerve-racking stew and turns the flame up to a boil. The tension doesn’t just derive from wondering where the story’s going to go but to which genre this movie even belongs. Are we in a horror film or a humanist drama? Will Raquel burst into tears or break out the knives?

One thing is clear: After 20 years working for the family, the maid is ill on several fronts. There are the fainting spells, yes, but also the psychotic ferocity with which she maintains her power base in the house. Raquel sees the college-age daughter Camila (Andrea García-Huidobro) as a spoiled brat to be tormented via early-morning vacuuming; the teenage son Lucas (Augustín Silva) as a prince to be indulged; the mother, Pilar (Claudia Celedón), as an easily manipulated ninny; the father, Mundo (Alejandro Goic), as something less than furniture.

Saavedra won a special jury prize at Sundance for her performance, and she deserves it: The actress conveys the titanic resentments stoking Raquel’s fury and the sometimes comic, sometimes frightening ways in which they reach her dourly placid surface. It’s one thing to try on the mistress’ clothes when no one’s home and quite another to wander through the house with Camila’s new kitten, wondering how and where to make it “disappear.’’

When Pilar takes it upon herself to assist Raquel by hiring a second maid, the games truly begin. The first few rivals are no match - a showdown with a tough old bird (Anita Reeves) is particularly epic - but eventually along comes Lucy (the delightful Mariana Loyola), a ray of sunshine to Raquel’s black cloud. At this point, “The Maid’’ seems to back away from the bloodbath it has been building toward and head in other, more ambiguous directions.

Director Sebastián Silva (who co-wrote the script with Pedro Peirano) is apparently working off some upper-middle-class guilt of his own. Now based in New York, he grew up in Santiago with a pair of maids (named Raquel and Lucy, no less) and shot the film in his own childhood home.

Perhaps that’s why “The Maid’’ doesn’t neatly fall into one genre or another: It’s rooted in observed reality and idiosyncratic individuals. It’s possible, Silva is saying, to live among people and still be terribly, crushingly isolated. It’s also possible to be saved, but only if you want to save yourself. That can be bloody hard when you’re paid to serve others.