Portrait of the art world exhibits humor, not cynicism 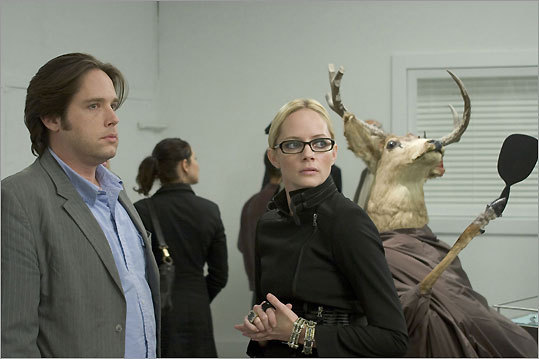 The New York art world does such a wonderful job of satirizing itself that further assistance hardly seems necessary. But with “(Untitled),’’ writer and director Jonathan Parker takes for granted the trumped-up stakes, the humorlessness, and the artists’ capacity for opportunism and willful absurdity. The players in this movie are cynical, but, amazingly, Parker is not. His movie works as a serious comedy in which the assorted players - a couple of artists, some gallerists, and the people who attend (or don’t attend) their shows - discuss what art is, what it should aspire to be, and what kind of people collect, exhibit, and consider it.

Adrian Jacobs (Adam Goldberg) is a doomy composer loosely of the John Cage performance-art mold. He plays with the sort of ensemble that crumples newspaper, drops a chain into a metal pail, bangs, blows, and bleats. One performance begins with the woman who plays the clarinet screaming, “Hiii Ya!’’ The auditoriums are mostly empty, but one evening Adrian’s brother, Josh (Eion Bailey), brings a date, Madeleine Gray (Marley Shelton), the owner of a Chelsea gallery where Josh is desperate to show his enormous bland abstractions.

Though she won’t exhibit it at the gallery, Madeleine has just sold a batch of Josh’s work to a hotel chain, but it’s “challenging’’ stuff like Adrian’s assaultive anti-music that turns her on. Even after he mocks her disruptions during his performance (her coat squeaks, she fans herself), she invites him to play during the opening for a new show by Ray Barko (Vinnie Jones). Ray is a hot bad-boy Brit. He specializes in the kind of taxidermy that made Damien Hirst rich and notorious. One Barko has a monkey sucking from the nozzle of a vacuum cleaner. “It’s easy to see why Ray’s a star,’’ Madeleine says. Once the camera has peered around the installation, that line seems pretty funny, but she’s not kidding. His pretentious, overblown pieces thrill her in the same way that Adrian’s sound-art does.

Parker proceeds to send the characters in and out of each other’s arms (a funny sex scene puts Madeleine’s pseudo dominatrix-wear to comical use), while their work moves in and out of each other’s lives. To round out the art-world ecosystem, Parker offers a computer zillionaire (Zak Orth) who collects art in order to diversify his stock portfolio. You’ll know when to roll your eyes, like when Ray describes his art as “intelligent design in a world of enlarged prostates.’’ Otherwise, the movie takes these people just seriously enough for us to listen when they talk. They all want to be taken seriously, too. So does the cast, especially Shelton. Both here and as the zombifying nurse in Robert Rodriguez’s half of “Grindhouse,’’ she’s like a little prize you don’t know you’re getting.

Walking the line between the movie’s broad strokes and its near-perfect pitch is the art itself, which has been designed and constructed by a team of smart designers. It’s all a joke, especially once a conceptualist called Monroe (Ptolemy Slocum) enters the action, but it’s “real’’ enough to thrive inside the quotation marks. The pieces here are skillfully bad. And both Adrian and Josh suspect they could do better. In a nice scene at a tribute concert, a quartet performs a polished version of Adrian’s truculent act. He watches humbled at both the precision and, presumably, the full house. Everyone here dreams of bigger things. When one unsophisticated woman tells Madeleine she’d like to open a gallery on Nantucket, I laughed. Of course she does! But then the movie shows up at her gallery, and I was embarrassed - not at the gallery itself but for having the gall to doubt her.

images, and such sights