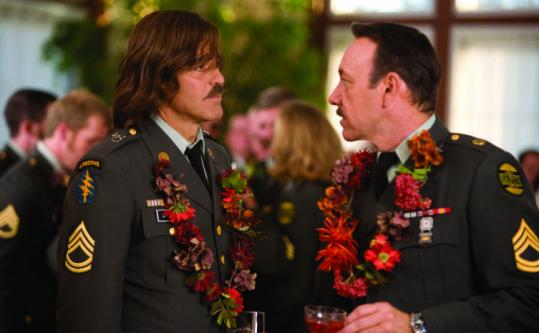 George Clooney (left) and Kevin Spacey in “The Men Who Stare at Goats.’’ (Laura Macgruder
)
November 7, 2009

American Casino Leslie Cockburn’s solid if unexceptional documentary about the causes and consequences of the financial meltdown shares Michael Moore’s politics, but, thankfully, not his methods. Along with news footage and interviews with experts, we meet ordinary people (mostly in Baltimore) threatened with foreclosure or who have actually lost their homes. (89 min., unrated) (Mark Feeney)

Brief Interviews With Hideous Men For his first film as a director, the actor John Krasinski has strip-mined David Foster Wallace’s 10-year-old story collection. What was once a disturbance of the literary peace is now just a painful date-night literalization: “He’s Just Not That into You - for Now.’’ Clogged with actors (including Timothy Hutton, Dominic Cooper, Max Minghella, Christopher Meloni, Chris Messina), the movie is dull despite itself. Krasinski’s taken Wallace and put him in a food processor. (80 min., unrated) (Wesley Morris)

A Christmas Carol Robert Zemeckis’s second try at 3-D motion-capture holiday storytelling (after 2004’s dire “The Polar Express’’) is a marked improvement: A darkly detailed marvel of creative visualization that does well by Dickens and right by audiences. Jim Carrey (or his digital facsimile) gives a sharp, reined-in performance as Scrooge, and while the film sometimes panders, it just as often soars. Too scary for the little guys, though. (96 min., PG) (Ty Burr)

Crude Joe Berlinger’s documentary follows a class-action lawsuit filed by 30,000 tribespeople against a US petro-giant for contaminating an area of land the size of Rhode Island. The film comments lucidly on the way worthy causes have to court the media and woo celebrities to get even a second of our attention. Featuring Sting. (See what I mean?) (105 min., unrated) (Ty Burr)

The Fourth Kind Silly, cynical, incompetent, dull. Half the movie claims to feature found video footage of alien abductions and spiritual possessions. The rest has Milla Jovovich playing an alleged actual psychologist in Alaska, who, while interviewing a rash of supposed abductees, winds up abducted herself. The money you left at the box office will know just how she feels. (98 min., PG-13) (Wesley Morris)

The Horse Boy No one wants to say that a movie about two parents’ search to alleviate their son’s autism is a bad idea. But when that search entails an arduous trek across Mongolia in search of a shaman and when the movie about that trek is called “The Horse Boy,’’ your eyebrows go up. And up they stayed for most of this well-meaning but trying documentary. (93 min., unrated) (Wesley Morris)

Severed Ways: The Norse Discovery of America Two Vikings, stranded in the new world of 1007 AD, hunt, gather, cook, and laze around a fire. Written and directed by Tony Stone, the movie is actually more involving than a film that shrinks the line separating seriousness from keeping a straight face should be. Driven by its synth-rock soundtrack, it’s more like the visual approximation of prog rock: long, immersive, textural, ambient, and, in its enjoyably ridiculous way, not entirely kidding. (108 min., unrated) (Wesley Morris)

Amelia It’s Oscar season: Time to wheel out Hilary Swank for her annual viewing. This biopic of Amelia Earhart is a big, hollow white elephant with a sharp idea struggling to get out: How does a woman marketed to the public as a star turn herself back into a human being? Richard Gere and Ewan McGregor play the men in Earhart’s life. (111 min., PG) (Ty Burr)

Antichrist Lars von Trier’s most extreme film, and that’s saying something. It’s a violently psychosexual drama about an unnamed couple (Willem Dafoe and Charlotte Gainsbourg) working out their grief over their child’s death and plunging into an increasingly primeval struggle. Maddening, misogynistic, ridiculous, powerful - not for the faint of heart. (109 min., unrated but plays as NC-17) (Ty Burr)

Astro Boy The latest iteration of the rocket-propelled superboy takes its cues from the original Japanese manga rather than the 1960s TV cartoon and is all the more interestingly weird for it. Freddie Highmore voices the computer animated hero, a Pinocchio-in-reverse who was a little boy and is now a robot. Nicolas Cage, Kristen Bell, and Donald Sutherland also aurally appear. (94 min., PG) (Ty Burr)

Cirque du Freak: The Vampire’s Assistant A sardonic vampire movie for teenage boys - a sort of Bill and Ted’s Undead Adventure. There’s plenty of talent before and behind the camera, but director Paul Weitz puts his trust in young lead actor Chris Massoglia, who’s too bland to deliver. John C. Reilly has a high old time as a vampire life coach. (108 min., PG-13) (Ty Burr)

Michael Jackson’s This Is It A compilation of footage from rehearsals for what would have been the late singer’s 50 concerts in London. The film arrives with an eerie taint. Yet watching Jackson pop, lock, rock, writhe, thrust, and clutch his crotch, we often see someone who’s vibrantly, reassuringly human. He’s a life force. He’s the Wiz. (98 min., PG) (Wesley Morris)

An archive of movie reviews can be found at www.boston.com/movies.

Theaters are subject to change.