The Men Who Stare at Goats

‘Goats’ suffers from a lack of concentration 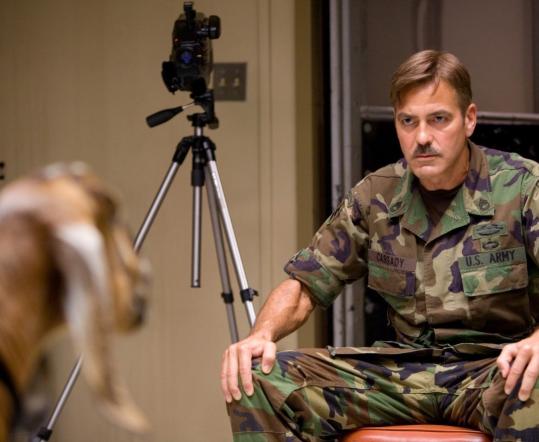 ‘The Men Who Stare at Goats’’ prompts an obvious question: Will there in fact be any goats stared at in this movie? And, if so, by whom and to what end? The answers - yes; George Clooney; to kill them by remote heart attack as part of a top-secret military initiative - are deliciously absurd even if you don’t know they’re based at least partly in historical truth.

You can’t make this stuff up, but you can botch the telling of it, and that’s what sinks this satiric drama based loosely on a 2004 nonfiction book by London-based journalist Jon Ronson. What could have been a shaggy-dog “Dr. Strangelove’’ for our times falls prey to a first-time feature director, an unfocused script, and a lead role that’s both underwritten and miscast.

Not Clooney; he’s fine. Actually, his Lyn Cassady - a rogue US Army psychic warrior - is the sort of part tailor-made for this star: supremely confident, a little nuts, primarily reactive. Clooney works best when there’s a Normal for him to bounce off; here that Normal is journalist Bob Wilton, a fictional stand-in for Ronson who (unlike the author) is American and who’s played by British actor Ewan McGregor with a vaguely East Coast accent that should never have made it through Customs.

It’s the early days of the 2003 Iraq invasion, and Wilton is trying to embed himself in-country to prove his macho bona fides to an ex-wife who couldn’t care less. The journalist meets Cassady, who’s posing as a private contractor but whose true identity as a veteran of the shadowy New Earth Army is soon smoked out.

What’s the New Earth Army? Imagine that a Vietnam veteran in the early 1970s dropped out, did a ton of drugs, absorbed every New Age bromide the Left Coast had to offer, then created an experimental unit of hippie warriors trained in psychic arts like “remote viewing’’ (i.e., ESP) and, yes, the ability to stare goats to death. In the real world, the “First Earth Battalion’’ never made it past a training manual that was then co-opted by the US military for psychological warfare and other nefarious purposes. In the movie - well, we get Jeff Bridges playing “The Dude Goes to War.’’

Bridges is cast as New Earth Army mastermind Bill Django, a ponytailed peacenik fox let loose in the Pentagon henhouse. The richest, most weirdly funny scenes in “The Men Who Stare at Goats’’ are the flashbacks to the secret unit’s training sessions, in which recruits Clooney (with long hair about as convincing as McGregor’s accent), Stephen Root, and others let their inner pagans loose, mastering the “sparkly eyes technique’’ and dancing about like teenage girls at a Grateful Dead concert.

Django’s shamanistic maxims pepper the script like hilarious smart bombs - “We must become the first superpower with super powers,’’ “Be all you can be,’’ “The US Army has no alternative but to be wonderful.’’ When Cassady successfully deploys a small plastic widget that “can hurt you a hundred different ways’’ (it looks like an ice scraper), the movie finds its groove: the place where America’s spiritual yearnings and killer instincts meet and intertwine.

But it’s early yet, and the groove gets lost. Cassady leads the reporter deeper into occupied Iraq, and “The Men Who Stare at Goats’’ becomes a cracked buddy movie: Hope and Crosby in “The Road to Baghdad.’’ One problem is that McGregor’s character isn’t funny or even interesting. A larger problem is that Grant Heslov, directing his first feature after writing “Good Night, and Good Luck’’ (as well as producing other Clooney movies), loses his way in the script’s many crosscurrents.

At some point, “The Men Who Stare at Goats’’ has to become about what we’ve done in Iraq - about how the pacifist ideals of the NEA have been warped by the modern Army - and it turns both preachy and confused. Kevin Spacey barely shows up for his role as the unit’s designated snake in the grass; the tone shifts from psychedelic “Catch-22’’ to hectic sub-Altman chaos.

Heslov wants us to laugh at the New Earth Army’s hippie-dippy vision and embrace it at the same time, and he’s just not that agile a director. The movie collapses, a disappointing case of coulda-been. Still, it leaves a moral worth treasuring: Free your goats and your mind - and country - will follow.

THE MEN WHO STARE AT GOATS

Written by: Peter Straughan, based on a book