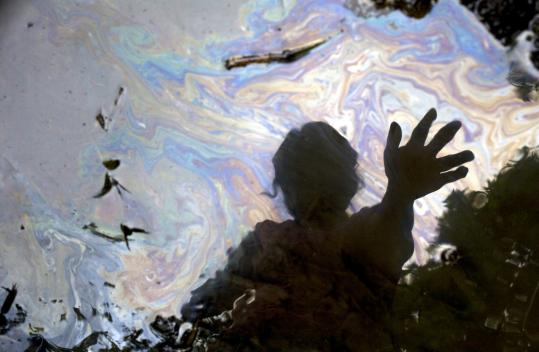 In “Crude,’’ the anger onscreen spreads as slowly and inexorably as toxic sludge. The documentary follows a pending class-action lawsuit filed by 30,000 tribespeople against the US petro-giant Chevron for contaminating an area of land the size of Rhode Island. It’s a classic David vs. Goliath face-off and at first “Crude’’ looks like one more environmental agit-doc intended to outrage and inspire. Director Joe Berlinger is no doctrinaire hack, though. His previous movies - “Brother’s Keeper,’’ “Paradise Lost,’’ “Metallica: Some Kind of Monster’’ - coolly stare down their subjects until other stories start to emerge, and so it is here.

The rousing primary narrative of “Crude’’ follows Ecuador’s Pablo Fajardo, a likable former laborer turned activist attorney who pushes the lawsuit forward in the name of his cancer-ridden countrymen. That story line, urgent as it is, gets increasingly upstaged by the media circus the plaintiffs have to mount in order to win over American hearts, minds, and tax-free contributions. The movie could alternately be titled “Mr. Fajardo’s Education.’’

Led by Steven Donziger, a New York-based attorney who acts as the case’s de facto image consultant, the Ecuadorans learn the value of brand-name celebrities and glossy magazines in grabbing a nanosecond of first-world attention spans. A couple from the Cofan indigenous community are brought up to Houston in their tribal dress to confront Chevron shareholders. Vanity Fair shoots Fajardo for its “Green Issue.’’ (The lawyer shyly wishes one of the sick families had been photographed, but that’s not showbiz, is it?) Trudie Styler comes down to lend her support and newspapers blare “Sting’s Wife Visits Ecuador.’’

Well, sure. If you were going up against a faceless oil corporation with bottomless pockets and a vested interest in stalling forever - Aguinda v. Texaco was first filed in 1993 - you’d use any tactics it took. “Crude’’ was filmed from 2005 to 2008, at a time when the case came out of dormancy and shot forward. An Ecuadoran judge demanded on-site inspections, and these turn into town forums in the field, with Fajardo and the locals arguing bitterly with in-country legal representatives of Chevron, which had purchased Texaco in 2001.

Berlinger lets the other side have its say: The state-run oil company, PetroEcuador, took over the US sites in 1992, so it’s the government’s fault. The country signed off on the development back in the ’60s, so Ecuadorans have no one to blame but themselves. He includes additional interviews with an earnest company scientist who insists there have been no spikes in cancer in the region.

All of this pales next to a tough-faced villager describing how his son died vomiting blood after swimming in a local watering hole, how another son didn’t survive two months. We join Maria Garofalo from San Carlos as she travels 18 hours by bus for cancer treatments. A Chevron attorney’s assertion that the drilling was “industrial exploitation permitted by law, not contamination,’’ is contrasted with an infant covered from head to toe with a virulent rash (three-fourths of the region’s children are similarly affected, says a local doctor). “The fundamental problem,’’ says one interviewee, “is that there’s no clean water.’’

So, yes, something needs to be done, and if it takes Sting reuniting the Police in-concert to sing “sending out an SOS’’ on behalf of the plaintiffs (among other worthy causes), so be it. At the end of “Crude,’’ the Ecuadoran judges present Chevron with a clean-up bill for $27 billion it will refuse to pay and Pablo Fajardo gets a CNN Hero Award from Jimmy Smits. UNICEF and the Amazon Defense Fund install a rainwater filtration system in the villages, a temporary fix at best. And villagers continue to sicken and die, whether we’re paying attention or not.

At: Museum of Fine Arts, today and selected dates through Nov. 13

In English and Spanish, with subtitles