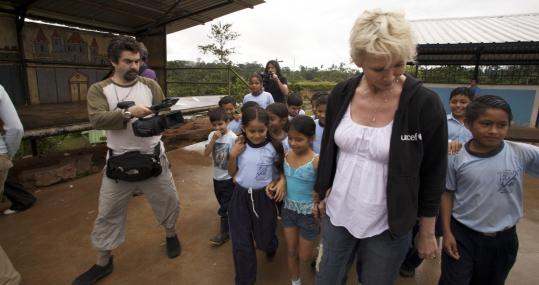 WASHINGTON - For the indigenous people of Ecuador’s blemished , it doesn’t matter whether Chevron is to blame, or Texaco, or the state-owned company Petroecuador. All that matters is that the kids have rashes, the chickens are dying, the people have cancer, and the earth around many of their villages is soaked with oil.

And that, in the end, is what persuaded documentary maker Joe Berlinger to take on the complex battle now playing out in an Ecuadoran court. After returning from a trip to the Amazon he took a drink of clean, clear tap water at his suburban New York home in Westchester County and realized he had to make a movie. The result is “Crude,’’ which opens Thursday in Boston for a five-showing run at the Museum of Fine Arts. Berlinger will hold a post-screening discussion Nov. 7.

What sets Berlinger’s documentary apart from other depictions of what environmentalists call “the Amazon’s Chernobyl’’ is that it is a film about advocacy as well as crude oil. Taking advantage of access to a savvy New York lawyer and an earnest Ecuadoran representing the indigenous people, Berlinger shows how they package an argument not only for Ecuador’s court, but for the court of public opinion.

Whether that is heroic or insidious depends on your point of view, but Berlinger doesn’t have to decide. His sympathies lie with the victims. In the end, his story leaves viewers with images of an ecological catastrophe that continues even as the 16-year-old legal case drags on.

The case hinges on the question of who bears responsibility for the dumping of toxic-waste products from oil drilling in Ecuador’s remote rain forest region, where drilling started in the 1960s. Back then it was promoted by Ecuador’s government, which later joined OPEC, and featured proudly in an old Texaco ad shown in “Crude.’’

On one side of the lawsuit are tens of thousands of indigenous people, represented by an appealing Ecuadoran, Pablo Fajardo, and the American Steven Donziger, who says he has moral as well as financial interests in the case. On the other side is the giant Chevron, which inherited this mess when it bought Texaco in 2001 even though Texaco had sold off its interests to the Ecuadoran state oil company years earlier.

Each side has cranked out reams of supporting data for energy reporters (like me), and they have traded accusations about manipulating the court in Ecuador. The film shows the two sides face to face in court sessions held in the Amazon region, where a judge examines firsthand the evidence of environmental damage and where a court-appointed investigator later goes to collect core samples. These samples drawn from beneath the Earth’s surface come up soaked in oil.

The subject is new to Berlinger. His past films include “Metallica: Some Kind of Monster,’’ about the explosive tensions in the heavy metal group; “Paradise Lost,’’ about convictions in the murder of three 8-year-old boys; and “Brother’s Keeper,’’ also about a murder trial. As with his earlier films, Berlinger lets the characters speak for themselves without narration.

Donziger is the film’s most compelling character. He is shown in a US hotel room coaching an Amazon tribesman about how to tell his story to an American audience. He persuades Vanity Fair to do an admiring article about Fajardo, the Ecuadoran lawyer. He attends the inauguration of Ecuador’s new leftist president, Rafael Correa, who later takes a helicopter trip to the damaged jungle.

Donziger also goes to London to enlist the support of Sting’s wife, Trudie Styler, a founding patron of the Rainforest Foundation. When she visits the jungle later, Donziger takes her aside to encourage her to mention Texaco as often as possible in public statements.

Chevron, by contrast, did not grant access to its strategy sessions but it did provide one of its US lawyers and its chief environmental scientist, and Berlinger gives them a fair amount of time to make their case.

What the film also doesn’t show is just how galling the entire affair must be for Chevron, which has long prided itself on being more ecologically correct, open, and savvy than its colleagues at companies such as Texaco. Is Chevron liable for most of the $27 billion in damages one Ecuadoran expert says have been caused by oil development?

Berlinger says that even now he doesn’t feel qualified to judge. But, he says, “at the end of the day, we should all care more about how companies act in our name and the things that they do even if they’re perfectly legal.’’