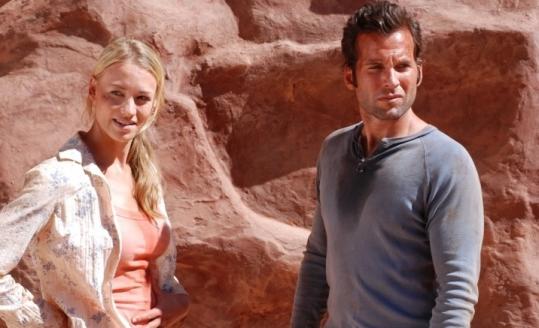 “The Canyon’’ is so singularly inept it gives you a whole new appreciation for the ept. A gracelessly written and filmed survival drama about bonehead yuppie newlyweds getting lost in the Grand Canyon, it’s aggravating enough to have you actively rooting for the couple’s demise, and the sooner the better. This isn’t a film, it’s a candidate for a Darwin Award.

Plenty of movies have squeezed suspense out of dropping citified characters into wild settings: “Deliverance,’’ anyone? “The Canyon’’ seems most closely modeled on 2003’s “Open Water,’’ which stranded two married scuba divers in the middle of the ocean and surrounded them with sharks. Here, it’s wolves. Moving up the evolutionary ladder does not make a movie scarier when everyone else onscreen appears to have moved down.

Screenwriter Steve Allrich and director Richard Harrah invite our derision early and often, as Nick (Eion Bailey) and Lori (Yvonne Strahovski of TV’s “Chuck’’) check into an Arizona motel with boilerplate dialogue (“After you, Mrs. Conway,’’ “I could get used to that.’’) on their way to a honeymoon excursion down the canyon by mule. Not realizing they should have applied for a permit months before, they take on Henry (Will Patton), a grizzled mountain man who offers to be their illegal guide after they meet him in a bar.

OK, stop right there. They head into the wilderness with a crazy guy they meet in a bar? Stupidest couple ever. How are we supposed to root for Nick and Lori when they possess the judgment skills of shaken puppies? When Nick looks at 100 feet of sheer cliff face and says “This is just like that rock wall I climbed at the gym,’’ how are we not supposed to laugh?

“The Canyon’’ gives no sign of being an intentional comedy, though, especially after one character suffers a broken leg and we’re treated to a lovingly filmed field amputation. On the other hand, Patton is an established character actor who’s probably seen worse scripts and he knows how to turn up the ham. He’s enjoyably awful and gone from the film much too soon.

After that, we’re left with Nick and Lori making one bad choice after another while quipping brightly through the pain. I did cheer up at the sight of Lori tiptoeing through the night-time desert on foot so as not to alert the wolves, but then I realized I was probably cheering for the wolves.

The half-star is for the Grand Canyon and its stand-in, Seven Mile Canyon in Moab, Utah. They are silent, beautiful, and this film’s real survivors.

THE CANYON Directed by: Richard Harrah