It’s a horror sequel and a health-care initiative 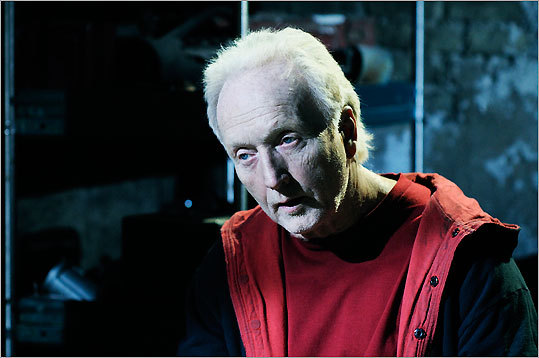 Here we are a half-dozen movies in and finally some ideas - and what passes for a navigable screenplay - are on display in “Saw VI.’’

The horror series has always been more interested in keeping sequels falling off the assembly line than in fulfilling its potential as a voice on public affairs. How stunning, then, that “Saw VI’’ steps right into the debate about America’s health-care crisis - offering, well, a slightly more punitive public option.

This time the series’ hands-off killer John “Jigsaw’’ Kramer (Tobin Bell) goes after William Easton (Peter Outerbridge), the totally corporate head of the insurance company that denied his request to try an experimental gene therapy. Jigsaw may have succumbed to cancer a few movies back, but he lives on through fresh flashbacks, fantasy sequences, videotapes, and newly conscripted henchmen.

Like all of Jigsaw’s victims, William wakes up and finds himself strapped into a metal contraption that looks like a tetanus-inducing prop for Criss Angel’s inevitable S&M show. But the stakes this time are compelling. We know how heartless William is. He’s even managed to deny coverage for one of his employees by manipulating his medical history. So watching him choose, in a 60-minute series of trials, which members of his staff live or die carries a tinge of drama.

Still, as bottom-line as William is, I wasn’t all that curious to see the explosives cuffed to his hands and feet detonate if he failed these tests. Yet suddenly the carnage has a wicked bit of literal and metaphorical social resonance. Seriously: Health insurance as house of torture.

All along, Jigsaw has been a nasty moral philosopher and judge. He and his henchmen (here, it’s his widow and Costas Mandylor as a compromised police detective) have sought to hurt those who broke the law, wasted their lives, or ruined the lives of others. Written by Marcus Dunstan and Patrick Melton and directed by Kevin Greutert, “Saw VI’’ gives that a political spin. And the movie features two or three scenes that actually feel complete. That’s two or three more than in the other sequels.

Who knew that the franchise’s creators would eventually find a plot twist that made sense? Who knew they’d realize that Tobin Bell’s righteous killer had current-events value? Given our cable-news climate, it’s not beyond imagining that John Kramer could have his own populist TV show: “Jigsaw’s Death Panel’’?