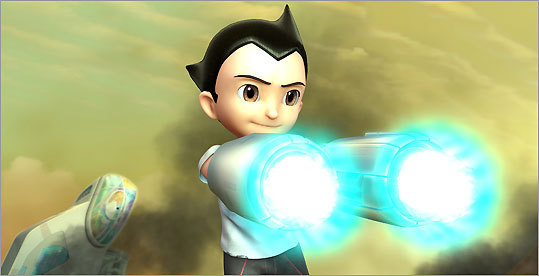 Astro Boy is a robot built by scientist Dr. Tenma to replace his son Toby, who died in an accident. (Summit Entertainment via AP)
By Ty Burr Globe Staff / October 23, 2009

A new “Astro Boy’’? Why not? If the movies can bring Alvin and the Chipmunks back from the pop-culture dead, what’s wrong with digitally reviving a character who deserves a second career? Especially when the results are as promising, if as bizarrely conflicted, as this.

The movie actually represents the third iteration, more or less, of the superhero rocket-boy. While most Americans of a certain age remember the animated TV episodes that ran in syndication from 1963 until the sprockets wore out in the early 1970s, “Astro Boy’’ originated in a 1951 Japanese comic book by Osamu Tezuka, the founder of the wide-eyed manga style that now overruns the earth. There have been two other TV versions (1980 and 2003) but the original manga (since translated into English and highly recommended) and the black-and-white TV show are Astro Boy’s twin power sources.

The new movie lifts off from Tezuka and is all the more interestingly weird for it. Set in Metro City, an airborne island paradise hovering high above a ruined Earth, “Astro Boy’’ at first seems a fusion of “WALL-E,’’ “I, Robot,’’ “A.I.: Artificial Intelligence,’’ and one of Hayao Miyazaki’s high-flying fables. Robots of all shapes and kinds serve mankind, and their inventor, Dr. Tenma (voiced by Nicolas Cage), is about to unveil his greatest cyborg yet, a peaceful warrior fueled by blue-core energy from outer space.

Metro City’s hawkish leader, General Stone (Donald Sutherland, having a ball), wants to use the malevolent red-core energy instead, and in the ensuing dust-up, Tenma’s young son Toby (Freddie Highmore) is accidentally killed. The grief-crazed father hits the lab and invents a robot in his child’s image, then spurns it for not being enough like Toby. Exiled, Astro Boy (Highmore again, working that American accent) embarks on a quest to find his identity and/or locate the machine guns in his butt.

OK, then: It’s “Pinocchio’’ with a metaphysical twist, the tale of a puppet who already was a real boy and will never be again. Grounded in this primal origin-story angst, “Astro Boy’’ alternately soars and sputters through a story line that’s not quite sure who it’s aimed at.

For instance: Director/co-writer David Bowers is formerly of Nick Park’s Aardman Animations, and there’s a trio of googly-eyed revolutionary robots that could have come from a “Wallace & Gromit’’ short by way of Monty Python. The second credited screenwriter, though, is Hollywood vet Timothy Harris (“Trading Places,’’ “Kindergarten Cop’’), which probably explains the dully cliched subplot in which Astro Boy falls to Earth and meets a group of Lost Boys (and one teen Lost Girl, who looks like a Bratz doll and is voiced by Kristen Bell). The computer animation, rendered by the Hong Kong-based Imagi Animation, has a pleasing pastel simplicity that sometimes looks iconic and other times just cheap.

The movie comments, in its cartoon way, on fascism, our throwaway culture, and the mistreatment of minorities (the minority being robots), but it also - and this is critical - delivers enough of the action movie goods to make your inner 8-year-old say “wicked awesome’’ at least three or four times. Can that alone restart a franchise? Can “Astro Boy’’ break free of the tentacles of the past and soar into tomorrow? Probably not - but stay tuned anyway.

Written by: Bowers and Timothy Harris, based on the comic book by Osamu Tezuka