Upward mobility: ‘Amelia’ explores how a pilot became a celebrity 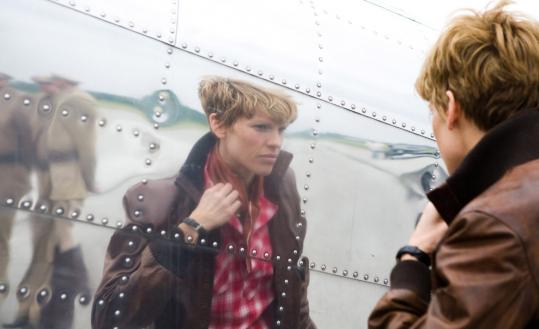 It’s Oscar season and you know what that means: Time to wheel Hilary Swank out for her annual viewing. In “Amelia,’’ she plays the legendary aviator Amelia Earhart, and those big, horsey incisors of hers may at last have met their match.

On the surface, the film appears to be a dispiriting awards-season white elephant, a triumph of production design, period costumes, and hollow bio-drama. The movie’s trailer adds to the sense of déjà vu: Is this a sequel to “Out of Africa,’’ or a gender-bending remake of “The Aviator,’’ or what? Yet inside “Amelia’’ is a sharp idea struggling to get out: How does a woman marketed to the public as a star turn herself back into a human being? And at what cost?

It’s a question for our times, and the one novelty of Mira Nair’s film is that it sets the conundrum in an earlier era, when celebrity branding wasn’t yet a national way of life. For all its dull pomp, “Amelia’’ is unexpectedly frank about how Earhart’s public persona - “Lady Lindy,’’ the dashing flying flapper - was an invention of, among others, publisher George Putnam (Richard Gere). Her first Atlantic crossing, in 1928, was a blatant fraud: Earhart sat in the back while Wilmer Stutz (Joe Anderson) and Louis Gordon (Aaron Abrams) piloted the plane.

After the ticker tape has been swept up, Gere’s Putnam sets Amelia to writing a book, posing for fashion shoots, endorsing Lucky Strike cigarettes and Kodak cameras and luggage and waffle irons. “Amelia’’ views this star pimpery with a level gaze, leaving judgment up to us. Earhart goes along with the charade because she loves Putnam and she loves being famous (it is, after all, the American way), but sooner or later her independent streak re-surfaces.

In 1932, Earhart flew the Atlantic again, this time solo and at the wheel. She worked to promote women fliers and commercial flight. She took Eleanor Roosevelt (Cherry Jones) up for a spin. And she kept an open marriage, carrying on a relationship with aeronautics expert Gene Vidal (Ewan McGregor) that Putnam, by then her husband, had little choice but to accept. As one character makes sure to remind us, she lived like a man.

The film juggles all this as best it can, dropping a number of balls along the way. The primary problem is that Nair (“Monsoon Wedding,’’ “The Namesake’’) doesn’t have the knack for this genre - we’re not convinced by the corny sweep of “Amelia’’ because we sense its director isn’t. This is one of those movies where the period re-creation - the props and costumes, the cars and sconces - feels perfectly crafted and perfectly oppressive. Even Gabriel Yared’s score feels left over from some forgotten Richard Attenborough epic.

A lesser problem is that McGregor is ridiculous as Vidal, an empty tuxedo masquerading as a character. The script by Ron Bass and Anna Hamilton Phelan introduces Vidal’s young son, Gore (William Cuddy), as a worshipful confidante of Amelia’s but neglects to bring on Putnam’s two sons by an earlier marriage because, I guess, they didn’t grow up to be famous authors. The movie’s a critique of celebrity culture that gets weak in the knees at the notion of stardom.

Swank rides the thematic turbulence like the star she is. The rawboned self-confidence that’s her hallmark dovetails nicely with her subject, and if Swank’s bleached eyebrows don’t convince you, her gumption does. I bought her not as Amelia but as this movie’s Amelia, understanding that the performance is a glossy approximation of the real thing - Kansas with a dash of Kate Hepburn - and that expecting the real real thing from Hollywood is foolish.

Gere, too, works at Putnam like a pro, even when the script requires him to stare into the distance and intone duff lines like “Home is wherever you are, Amelia.’’ By the final scenes, the couple has arrived at a mutual adoration that feels unexpectedly touching. “Amelia’’ may actually be best for mother-daughter movie dates: You get an interestingly problematic role model, a little food for thought, a few good slacks, and a nice big cry.

On July 2, 1937, Earhart and navigator Fred Noonan (Christopher Eccleston) disappeared over the Pacific Ocean on the final leg of their circumnavigation of the globe. “Amelia’’ strains to build suspense in its last 20 minutes, but since we all know what’s going to happen, the scenes feel both inevitable and cruel. The film’s actual climax may have come earlier and more quietly, when Earhart is asked by a reporter, “Are you a better celebrity than a pilot?’’ She doesn’t come up with a convincing answer and neither does the movie. It asks the question, though, and that’s a start.

A critical look at aviation films

Hollywood's love affair with aviation -- the genre is practically part of its DNA -- has had its ups and downs.

Written by: Ron Bass and Anna Hamilton Phelan, based on books by Susan Butler and Mary S. Lovell