Learning on the job

Carey Mulligan, in her first starring role, displays wisdom beyond her years in ‘An Education’ 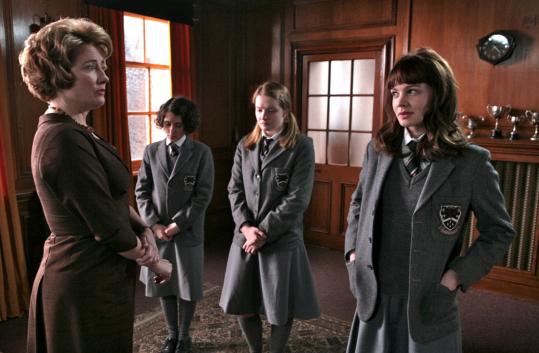 LOS ANGELES - Carey Mulligan doesn’t typically act her age. That’s not an insult to her professionally, or personally. She just doesn’t, or hasn’t until recently. Instead, almost halfway through her 20s, she’s still got the looks and demeanor of a teenage girl, at least on stage and screen.

Mulligan’s latest role is no exception. In “An Education,’’ opening Friday in Boston, she plays a schoolgirl who, in postwar London, is torn between pursuing her education at Oxford and being pursued by a man twice her age. Mulligan plays 16 to her then real-life 22; these days she’s 24 but still willing to dial it down for the right role.

“It’s rare to find young characters who get that much of a journey or aren’t just accessories to the main character,’’ Mulligan says, talking about the movie that has brought her many firsts: starring role, Sundance Film Festival (or any film festival), full-blown press junket, even Oscar buzz. “I think you go where the good characters are, and I wouldn’t say no to going back, but I wouldn’t want to revisit old ground and play the same girl again.’’

That Mulligan can pull off the age difference in “An Education’’ is interesting, especially since in person she looks like any other 24-year-old, albeit one with a gorgeous gamine haircut, milky white skin, and a hair stylist and a makeup artist at the ready to keep them looking perfect.

But what is likely to be most attention-getting about “An Education’’ is the age difference between her character, Jenny, and Peter Sarsgaard’s David; although in truth his character is immature enough and hers is smart enough that at times he doesn’t seem that much older. (For the record, Jenny waits until she turns 17 to have sex with David, who seems almost relieved at the postponement of his seduction.)

Mulligan and the man she sometimes calls Sars, who is 38, are good friends, and she says she wasn’t grossed out by their (very modestly) intimate scenes together even if she was supposed to be a high school senior.

“I didn’t think about it like that,’’ she says. “Peter said something I kind of agree with: As people, or actors, we never felt vastly different in age. It never felt like he was an older guy and I was a younger actress and we had to find a way of communicating. It just felt like friends.’’

Lone Scherfig, who directed “An Education’’ from a script by novelist Nick Hornby (“High Fidelity,’’ “About a Boy’’), says she doesn’t understand why there could be controversy over a 30-something having a relationship with a willing 16-year-old who he plies with nice things. And she has a 15-year-old daughter.

But Scherfig is also Scandinavian and doesn’t grasp Americans’ puritanical streak when it comes to sex. She sees her small, independent film more as being about “London and education and possibilities and an appetite for culture and knowledge rather than about sex.’’

What she couldn’t see, however, was anyone other than Mulligan in the lead role of “An Education,’’ adapted from a memoir by the British journalist Lynn Barber. And the filmmakers considered plenty of candidates.

“We were fishing with a big net,’’ Scherfig says. “We saw a lot of girls. But she stood out, and I think she has a real sweetness that suits the part very well. She really is sweet without being cute. Then she turned out to also be really wise. She makes good choices, she has good taste, and she is diligent.’’

Word-of-mouth about Mulligan’s performance is big, particularly for someone basically unknown. (“It’s too mad a concept to give thought to, really,’’ she says. “For the film to get picked up was huge to me. I felt like that was all I could ask for.’’) At the time of filming, she’d only been in two other features, “And When Did You Last See Your Father?’’ and “Pride and Prejudice,’’ had appeared on British television, and starred on both New York and London stages. She played the ingénue Nina opposite Sarsgaard in the 2008 Broadway revival of Anton Chekhov’s “The Seagull.’’

Since filming “An Education’’ she had a tiny part in the Johnny Depp gangster movie “Public Enemies,’’ and soon she’ll be seen in “Brothers,’’ with Jake Gyllenhaal, and in “The Greatest,’’ with Susan Sarandon and Pierce Brosnan. But it’s Oliver Stone’s “Wall Street 2: Money Never Sleeps’’ that is most likely to change her life.

Before “An Education,’’ Mulligan had never appeared in a movie trailer; she was so jazzed she checked it out on YouTube. Still, Mulligan says, she never gets recognized. She moves about America unnoticed. Then again, she’s never starred in a big-budget American movie before. And “Wall Street’’ is a 1980s iconic film. She was 2 when it opened.

Mulligan sounds as innocent as Jenny when she says she didn’t consider the ramifications of starring opposite Michael Douglas in a potential Hollywood blockbuster. She plays Gordon Gekko’s daughter and not his girlfriend - phew - but the rumor mill has her dating costar Shia LaBeouf. (“According to . . . ?’’ she says, laughing, her only comment on her love life.)

Mulligan says she never considered fame from acting because she’s never drawn attention before. She says she took on the part of Winnie Gekko mostly because it filled her with fear.

“[Becoming tabloid fodder has] never been a consideration,’’ she says. “It’s never worried me. It could or it couldn’t happen, or by next year I could be wearing a red wig and doing a play in London.

“I just love the challenge of it. I’m playing an adult,’’ she continues. “It feels like a men’s club, and I’m trying to be the only woman and that’s kind of exciting. It’s not interesting not to do things that scare you and I was really scared by ‘Wall Street.’ That’s why I took it. And to work with Oliver Stone, there was no way I was ever going to say no.’’

The cropped reddish hair Mulligan is currently sporting is for “Wall Street 2.’’ For “Public Enemies,’’ she dyed it peroxide white and chopped it. In “An Education,’’ the hair is long and dark, and she transforms from schoolgirl into era-appropriate hipster, at least in appearance. The remade Jenny has been compared to Audrey Hepburn more than once, and it’s an accurate comparison even if it stuns and perhaps embarrasses Mulligan. She, too, has perfectly shaped eyebrows and wears black capri pants, as well as chunky black velvet high heels. Her only jewelry is two gold bands on her right hand. The nails are well-kept but short, flat, and unpolished. She sounds unpretentious, too.

“People really respond to her,’’ Scherfig says. “She is lovable.’’

Mulligan is aware how lucky she is even if she weren’t to make it as a major movie star. Recently she shared her shooting and publicity schedules with her “Mum,’’ who told her, “ ‘Well, if it all gets a bit much and it gets a bit mad and you don’t like it, you can go to London and be a theater actress.’

“And I thought, that’s right, I can do that,’’ Mulligan says. “To work consistently in any form would be a blessing, but to work in theater I’d be more than happy.’’

Still, she could not resist complaining to her brother recently. As she explains it, he works for the British Ministry of Defence and is also in the Territorial Army, a part-time paid volunteer service. She was in New York shooting “Wall Street 2’’ and paparazzi were everywhere.

Momentarily miserable, she says, “I texted him and said, ‘This is all [garbage] and I hate it.’ ’’

His response? She says he wrote back, “ ‘I’m on a course with a guy who has no legs. Get over it. Pick yourself up, dry your eyes off.’ He’s right. My life is 99 percent brilliant . . . In the grand scheme of things, it’s not a bad position to be in.’’

Wise words for someone so young and effective at playing even younger.