Girls of ‘St. Trinian’s’ just want to have fun 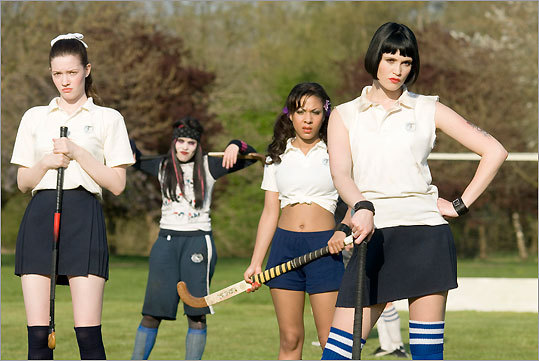 To raise money for their headmistress' back taxes, schoolgirls plot to seal a Vermeer. (Neo Classics Films)
By Wesley Morris Globe Staff / October 9, 2009

What happened to Rupert Everett? He should have been a major movie star. He was so handsome, so debonair, so sophisticatedly English he seemed to be in a tuxedo even when he wasn’t. He was the rare actor whom you could see bantering with just about any woman. Everett was rumored to be the next James Bond (although, who hasn’t at this point) and the next Cary Grant. Then Daniel Craig became the new James Bond and George Clooney the new Grant. Then Clive Owen showed up, and Everett unfortunately seemed to be old news. You don’t want to say it’s because he’s openly gay. But there is that.

There is also his approach to acting, which often tended to cross the line of Grantly nonchalance into boredom. I’ve seen Everett twice in “An Ideal Husband,’’ and neither time did I have any idea what he was saying. He power-talked or mumbled most of the time. If he didn’t believe he was a movie star, why should we?

Now 50, he’s given himself over to broad character work. And he looks like he’s having a good time. In “St. Trinian’s,’’ he plays two parts: Ms. Fritton, the headmistress of a notoriously uncouth girls’ academy, and her estranged brother, a prissy old art dealer. Everett is obviously amused by the idea of acting opposite himself. He looks as if he’s going to laugh at any minute. His fatigued stylings are the perfect contrast for a movie of exhausting, seemingly unlimited rambunctiousness.

The story revolves around the education minister’s mission to close St. Trinian’s for general awfulness. (Colin Firth plays the minister.) As if that weren’t enough, Fritton owes a half-million pounds in back taxes. The best thing about the movie is that the students (and there must be thousands of these girls - all races, ages, and degrees of spunk) actually rise to Ms. Fritton’s defense. They don’t want to go to a “normal’’ school - or even a good one, for that matter. So they plot to steal a Vermeer from the National Gallery Museum and sell it on the black market to save St. Trinian’s.

Sadly, the movie is a zoo. The ditzes cheat their way through a quiz tournament as a distraction while their fellow students ransack the museum. It’s impossible to impose order on the proceedings, so the film’s two directors (Oliver Parker, Barnaby Thompson) and writers (Nick Moorcroft and Piers Ashworth) don’t even try. “St. Trinian’s’’ is based on the drawings of English cartoonist Ronald Searle; his irreverence has made it to the finished product but his skill has not.

Firth is acting with his buttocks clenched and his nose in the air again. His job here involves enduring assorted humiliations (falling from windows, Ms. Fritton’s sexual advances). Mission accomplished. The soundtrack is sugared with songs by Lily Allen, Sophie Ellis-Bextor, and singers whose records sound like theirs.

The movie was a hit in England last year, spawning an immediate sequel (brace yourselves). And as shoddy as the movie is, most 13-year-old girls won’t be able to help themselves. “St. Trinian’s’’ is kookier and cruder than what they’re watching at home. After 15 minutes, their parents will know what they’ve signed on for: the longest Cyndi Lauper video ever made.

Written by: Nick Moorcroft and Piers Ashworth, taken from the cartoons of Ronald Searle

At: Fresh Pond, Cambridge, and suburbs