Where the wonder goes

Hollywood so often makes a hash of children’s classics, deaf to their quiet power. Globe film critic Ty Burr rues that sorry trend, but sees hope in some forthcoming releases. 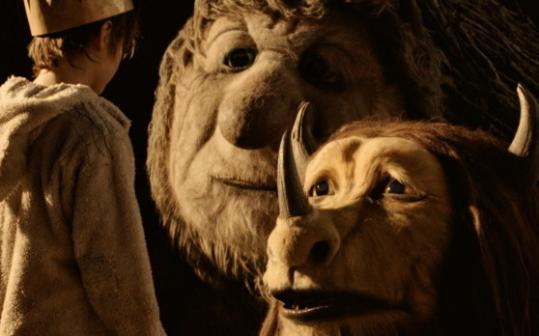 A scene from "Where the Wild Things Are." (Warner Brothers)
By Ty Burr Globe Staff / October 4, 2009

Max has a single mom now, and the single mom has a boyfriend. One of the Wild Things sounds like Tony Soprano. The musical score is by the lead singer of the rock group The Yeah Yeah Yeahs.

“Where the Wild Things Are’’ has become a movie. Does that mean it has to lose its innocence?

An awful lot is riding on the Spike Jonze film adaptation of the beloved 1963 Maurice Sendak picture book, which opens a week from Friday. The future of kids’ movies, for one thing. The sanctity of certain children’s books, for another.

If “Wild Things’’ succeeds at the box office, along with Wes Anderson’s upcoming Roald Dahl adaptation “Fantastic Mr. Fox’’ and Tim Burton’s “Alice in Wonderland’’ (due in March 2010), a new era may be upon us, one in which adaptations of the classics of children’s literature aim less for commercialism and more for atmosphere, deeper entertainment, and even (sshhh) art. Of course, whether the source - the original story - gets stretched beyond recognition is another matter.

Respecting the source, traditionally, is not what Hollywood does to children’s books. The great art of these works (and “Wild Things’’ is generally acknowledged as among the greatest) is their simplicity: The ways in which they address profound aspects of childhood while seeming to look the other way. It’s that simplicity, a staging ground for a child’s boundless imagination, that is often the first thing to go. Movies, especially ones with massive budgets, usually want to do the imagining for you.

But why should the studios treat classic texts with kid gloves when they’re rewarded so well for “modernizing’’ them? The process goes all the way back to 1939, when L. Frank Baum’s “The Wizard of Oz’’ was given the full MGM treatment, down to musical numbers and rising starlet Judy Garland. Fast forward to today and “Cloudy With a Chance of Meatballs’’ - No. 1 at the box office the past two weekends - has succeeded on its antic storyline (invented wholesale, since the book has none) but more crucially by riding the coattails of summer 2009’s 3D breakthrough.

“Cloudy’’ stands for the old-school method of minting movie money out of children’s books: Make it shiny, hire stars to provide voices, and throw in lots of topical jokes to keep the grown-ups awake. (If you can retain the original story, well, that’s nice, too.)

“Shrek’’ is the model: A slender and amusingly contrarian tale about a stinky ogre, drawn with William Steig’s patented wobbly lines, the Dreamworks film became a slick CGI franchise featuring the voices of Mike Myers, Eddie Murphy, and Cameron Diaz. The “Shrek’’ movies are well done: witty and fast and occasionally even subversive in a way that children and Steig might salute. The book remains its own smaller and richer reward.

So too with Chris Van Allsburg, whose works are light on text but illustrated with a sense of deep and abiding mystery. “Jumanji’’ (1995) and “Zathura’’ (2005) became ordinary Hollywood family films, noisy and acceptable, but Robert Zemeckis tried to pour the Allsburg magic into a digital bottle with the 2004 motion-capture project “The Polar Express.’’ The results were to the original what a wax dummy is to a human being: a soulless simulacrum.

In fact, movie producers believe that modern children, attention spans sliced thin by video games and sensibilities hardened by “Transformers,’’ expect books to be drastically repurposed for the screen. They may even be right. Or they may be wrong: The experience my own daughter, then 10, had with the 2004 movie “Ella Enchanted’’ is illustrative.

She’d loved the 1997 book, with its strong-minded heroine and fairy-tale absurdities, and the fact that the movie starred Anne Hathaway, that class act from “The Princess Diaries’’ was a good sign. Where “Ella’’ the book was whimsical and smart, though, “Ella’’ the movie was loud and coarse, weighed down with pandering pop-culture references and farting giants. At the end, when Hathaway whips off her princess gown to reveal a mini-skirt and dances to “Don’t Go Breaking My Heart,’’ my daughter’s lips were thin and gray. She had just encountered her first Hollywood sell-out, and it was a hard, hard lesson.

Her wrath recalled my own childhood dismay with 1970’s “The Phantom Tollbooth,’’ a Chuck Jones animated film that completely missed the epic charm of Norton Juster’s classic book. “Ella’’ reminded me too of the wholesale live-action pillaging of Dr. Seuss in Ron Howard’s 2000 “How the Grinch Stole Christmas’’ - a hit but an ugly and obnoxious one - and the genuinely hateful 2003 “The Cat in the Hat,’’ in which Myers obliterates the good doctor’s enlightened innocence with sniggers and “ho’’ jokes.

“Cat’’ may in fact be the worst kiddie lit adaptation of all time, and it reportedly so horrified Audrey Geisel, the author’s widow, that she put the kibosh on further ransacking of the canon by Howard’s Imagine Entertainment. (“Horton Hears a Who,’’ a digitally animated and much more toned-down Seuss adaptation, came out in 2008 - from Twentieth Century Fox and Blue Sky Animation).

In fact, books with more developed storylines often have an easier time of it at the movies. A series like “The Narnia Chronicles’’ fits right in with the modern fantasy genre as codified by “Lord of the Rings,’’ and so what if some of C.S. Lewis’ donnish insights get drowned out? Walden Media, which is producing the “Narnia’’ movies, has had even better luck with small-scale adaptations of summer reading-list perennials like “Holes’’ (2003), “Because of Winn-Dixie’’ (2005), and “Bridge to Terabithia’’ (2007). Because they’re not designed (or budgeted) to be blockbusters, these films can afford to stay true to the originals. Walden’s 2006 treatment of “Charlotte’s Web’’ is exemplary: A live-action adaptation that at least tries to honor E.B. White’s barnyard metaphysics.

Compare that film with 1999’s “Stuart Little,’’ a bright mix of live-action and digital animation with none of the book’s enchanted Manhattan surrealism. It’s precisely that quieter sort of literary magic that doesn’t transfer to the screen and perhaps why the books of Roald Dahl have fared comparatively well.

Dahl was the great rabble-rouser of children’s literature, with an outrageous visual sensibility yoked to a dark, even grim, comic imagination. And it’s Dahl’s books that have attracted like-minded filmmakers outside the mainstream orbit. The 1971 “Charlie and the Chocolate Factory’’ has its oddball pleasures but Tim Burton’s 2005 remake is a work of genuine big-budget eccentricity. Henry Selick’s stop-motion “James and the Giant Peach’’ (1996) is a clockwork marvel and Danny DeVito’s “Matilda’’ (1996) is a smart, funny, deeply felt tale of schoolyard revolt. This bodes well for Wes Anderson’s Dahl adaptation, “Fantastic Mr. Fox,’’ arriving in theaters in late November. The director of such cult favorites as “The Royal Tenenbaums’’ and “Rushmore’’ is taking an old-fashioned handmade approach to Fox’s battle with farmers Boggins, Bunce, and Bean. Against the funky stop-motion animation is the high wattage of the voice cast: George Clooney and Meryl Streep as Mr. and Mrs. Fox, Bill Murray as a badger, Willem Dafoe as a rat.

“Fox’’ is, in other words, part of a new hipster kiddie wave, pioneered by Burton and his occasional collaborator Selick. “Where the Wild Things Are’’ ups the ante: The film’s production team is dripping with indie/alternative cinema bona fides, from director Jonze (“Being John Malkovich,’’ “Adaptation’’) and screenwriter Dave Eggers to its stars - both live-action (Catherine Keener as Mom) and vocal (James Gandolfini, Forest Whitaker). Jonze was recently profiled in the New York Times magazine. Eggers’ novelization of his script ran in The New Yorker. This is not your standard mass-market push.

All well and cool - but will it be good for “Wild Things’’ the cultural property? After Disney absorbed and regurgitated “Winnie the Pooh’’ in the 1960s, for instance, A.A. Milne’s original books got relegated to the pop-culture attic by the masses. (Whose Pooh is on the lunchboxes: Disney’s or Ernest H. Shepard’s?) All the indie cred will mean nothing if Jonze’s “Wild Things’’ either sells out the book’s dreamlike vision of rebel childhood or tarts it up with artful slacker flash. The New Yorker novelization was an interesting read but worrisome, too: Max and his Wild Things don’t need a back story.

Take solace in this, then: The 81-year-old Maurice Sendak has given his blessing to the new movie. That means one of two things and possibly both. He genuinely likes what Jonze has done and/or he knows it ultimately doesn’t matter. Whatever happens, whether the movie is a flop or a hit, Max will always sail on forever between the covers of his book and the youngest of new readers will always follow.