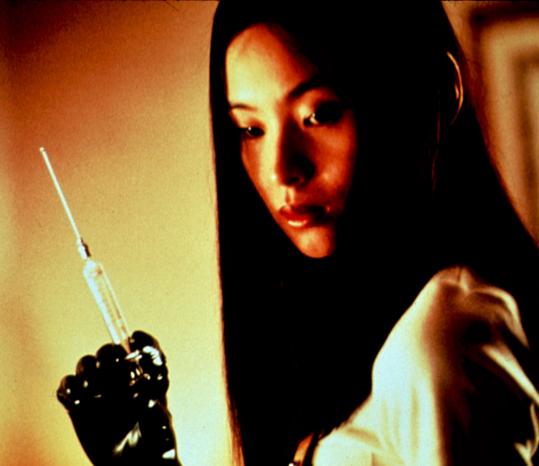 So what exactly is in that burlap bag?

Give Japanese genre director Takashi Miike credit for being willing to go a long, long way to lull horror audiences into a false sense of security. Years after the release of Miike’s notorious “Audition’’ (1999), there still hasn’t been a film that’s shifted from human drama to grotesque nightmare nearly as boldly, or as jarringly. Even if you know the movie by reputation only, you’ve probably heard about its wildly unconventional structure: For the first hour or so, it’s actually all tender (if exaggeratedly quaint) romance, as middle-aged widower Aoyama (Ryo Ishibashi) yearns to remarry. A producer friend stages a phony casting call to help Aoyama meet women, and he quickly falls for Asami (Eihi Shiina), a former ballerina whose quiet grace reminds him of his late wife. Miike engages in some less than subtle foreshadowing - why don’t any of the references accompanying Asami’s photograph seem to check out? - but there’s no preparing for what lies in store for Aoyama, or what Asami’s got in the burlap bag on her apartment floor. Extras: Miike sits down for Japanese-language commentary with screenwriter Daisuke Tengan. Cast members appear in a 75-minute interview collection, noting that for all of the film’s cult cachet, it apparently drew more attention in America than in Japan. (And even here, surprisingly, the film essentially got a straight-to-DVD release after making the festival and art house rounds.) Critical liner notes aptly point out the film’s polarized labeling as both feminist and misogynist. (Shout! Factory, $24.99; Blu-ray, $29.99)

The Disney Princess demographic will have a swell time watching, as always, and now the kids can even upload their pictures onto a dwarf - in the actual film. Overall, though, the studio’s Blu-ray unveiling of “the one that started it all’’ feels squarely aimed at adults. In addition to the requisite image and sound upgrades, bonuses include a virtual walk-through of the old Disney offices. Expect some debate over a new viewing option that allows the film’s original full-screen presentation to be expanded to widescreen by tacking on custom-drawn border imagery. The colorization controversy of 2009? (Disney, $39.99; standard DVD available Nov. 24)

Toronto hard-metal rockers Steve “Lips’’ Kudlow and Robb Reiner bask in a spotlight they haven’t enjoyed since the early ’80s (if ever) in director Sacha Gervasi’s entertaining portrait of a band that never caught its big break. First-run reviewers threw around some Spinal Tap analogies, but Gervasi laughs with the members of Anvil rather than at them. When Kudlow insists that he loves the escape of playing music, never mind fame or obscurity, the sentiment feels genuine, and touching. Extras: commentary by Kudlow, Reiner, and Gervasi; deleted interviews with original Anvil ax man “Squirrely’’ and bass player “Dix.’’ (VH1 Films, $24.99)

ASSASSINATION OF A HIGH SCHOOL PRESIDENT (2009)

This straight-to-DVD teen satire aspires to the high school noir of “Brick,’’ but comes up way short with its yarn about sophomore news- hound Reece Daniel Thompson (“Rocket Science’’) trying to crack an SAT theft affecting Mischa Barton (“The O.C.’’) and others. Still, the movie livens up any time Bruce Willis, in how’d-they-land-him mode, gives the kids a rageaholic earful as the school’s principal. Ed Rooney he’s not; chew gum in his presence at your peril. Extras: filmmaker commentary; alternate and deleted scenes. (, $24.96)

You know what those punky kids are thinking: “A talking horse? When was TV ever that lame?’’ Feel free to remind the little contrarians about the five minutes they spent vegging out with that Geico cavemen sitcom. Extras: Alan Young and Connie Hines interviews. (Shout! Factory, $44.99)

Ken Burns paints another cultural landscape study as big as the great outdoors - and conveniently available on DVD, if you didn’t have the endurance to catch it all on TV this past week. Extras: behind-the-scenes materials. (Paramount, $99.99; Blu-ray, $129.99)

Titles are in stores Tuesday unless specified.