‘Coco’ has the fashion, but lacks real passion 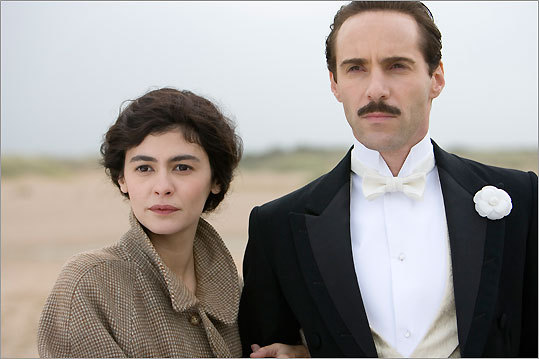 As advertised, “Coco Before Chanel’’ shows us the life of the legendary fashion designer when she was just a skinny, young milliner named Gabrielle. It’s unclear what we’re to learn about Chanel from this movie, aside from the news that she styled herself as a somewhat androgynous rag doll and could do just about anything with a needle and thread. Having Audrey Tautou play her is a good idea, since it gives her gamine approach to acting a more regal place to go. But she doesn’t look happy about it. Her face is drawn. Her lips pout. The usual light in her great big eyes has been turned down as if she’s trying to save energy.

Anne Fontaine directs “Coco Before Chanel’’ from a script she adapted with her sister Camille from Edmonde Charles-Roux’s book. And you know they’re out of ideas when all Tautou does is walk and look around, then walk and look around some more. It’s as if she’s window-shopping for another movie. The one she’s in isn’t terrible. But it’s not interesting, either.

The Chanel we get here, in 1908 France, is sharp, reserved, judgmental, resourceful, and painfully thin. Her coats and shirts hang baggy on her frame. She wears pants, ties, vests, and a version of a tuxedo shirt. On the occasion she wears a dress, it’s a drab pinafore, which, of course, from style standpoint, is her agenda: simplicity. Other women are stuffing themselves into corseted gowns that promote cleavage and hips to suitors. Chanel was more demure: a scarecrow at a burlesque show.

I could have watched this woman rip a piece fabric and turn it into a dress all day. I haven’t seen a lot of that. I have seen movies about a woman caught between two men, as Chanel is here.

The first notices her performing in a Moulins bar alongside her sister (Marian Gillain). His name is Étienne Balsan (Benoît Poelvoorde), a horse-breeder, polo-player, and rake. He could have had any woman - he is, in fact, having every woman - but he nicknames Gabrielle “Coco’’ and chooses her to live at his enormous estate.

There’s no passion between Balsan and Chanel. But having her around makes him feel like he has good taste. Poelvoorde gives a big, hard-working performance that falls somewhere between silent-movie dastard and the sort of possessive but not quite villainous husband that Klaus Maria Brandauer used to play. Balsan wants Coco to love him but he’s too coarse for her. The problem for us is nothing snaps in any of these scenes. They’re all tableaux.

The movie then introduces the second man, a tycoon named Arthur “Boy’’ Capel (Alessandro Nivola), and wakes up for a few scenes. Capel is dashing with his English-accented French and Errol Flynn mustache. Balsan essentially loans Chanel to Capel and never gets her back completely. (Both men helped Chanel turn her milliner business into a fashion empire.) She and Capel fall in love, and it feels real.

“You’re elegant,’’ Capel tells her one morning. And before you wonder if he’s out of his mind, there’s a long shot of Chanel perched on a divan in a pair of silk pajamas, gazing in his direction, her hair unpinned maybe for the first time. He’s right. It’s the most romantic shot in the whole film. He makes her feel like a woman.

But Fontaine doesn’t quite know how to express that. Capel takes her to a fabric shop in Deauville, where she buys some dark fabric; later she’s dancing at a party, wearing a prototype of Chanel’s iconic little black dress. But we never quite see her in it. That’s a crime not because the dress is so remarkable, although it is, but because the love and feeling of sexiness that inspired her to make it have been smothered.

Jane Campion’s “Bright Star,’’ set in 19th-century England, is also about a young Englishwoman who makes her own hats and dresses. Her clothes are a profound expression of her vitality. I’m not sure what Fontaine thinks fashion means to Chanel. The movie fails to find any joy in her creations.

By the time the movie leaps forward to show us Tautou done up as the imperious grand dame (in costume pearls and woven wool suit, she actually looks like Ingrid Bergman), you don’t know what to think. The sudden sight of this iconic Chanel is jarring, like watching a vat of copper magically become the Statue of Liberty. The image gets stranger as models wearing classic Chanel pass the designer on a gleaming staircase. The clothes are reflected in mirrors, and she watches like a zombie as they pass. How we wound up at the Funhouse of Chanel is anybody’s guess.

Written by: Anne and Camille Fontaine, adapted from the book by Edmonde Charles-Roux

At: Kendall Square and Coolidge Corner