A new set of wheels

For her first time behind the camera, Drew Barrymore hurtled into the world of roller derby. Not only did she call ‘Action,’ she got into the action - skates and elbow pads on. 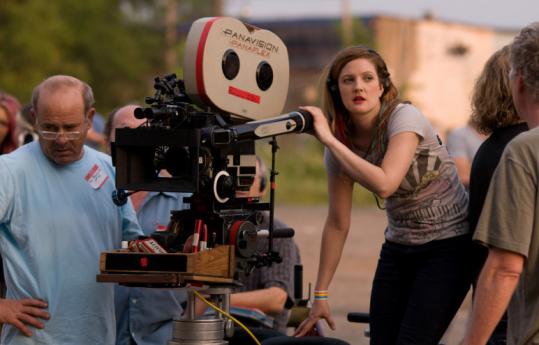 Drew Barrymore has been around cameras since she was 3, but “Whip It’’ is her directorial debut. She acts, too, wearing number 2 with Hurl Scouts teammates Ellen Page (22), and Kristen Wiig. She went to Farmington, Mich., to promote the film with Detroit Derby Girls Christina Iulianelli (left of Barrymore) and Lauren Bick, who have roles in it, and included Boston in the tour (below). (Photos Darren Michaels/Fox Searchlight Pictures (Left And Center); Patricia Beck/Detroit Free Press via Ap)
By Janice Page Globe Correspondent / September 27, 2009

The first time I saw a leg whip, it blew my mind.

This was back around 1970, when Saturdays almost always found me in front of the television with my dad, watching a double-barreled assault of roller derby and wrestling. In those days, roller derby was essentially wrestling on eight wheels, much more spectacle than sport, critics will tell you. But all I remember is: It was fast. It was showy. It was brutal. And, unbelievably, it was made for girls.

Drew Barrymore beams brighter than a pigtailed child star whenever people share these kinds of reminiscences, which they’re doing quite a lot now that “Whip It’’ is about to hit theaters and the 34-year-old showbiz veteran is traveling the country promoting it. Opening Friday, the movie is an adaptation of Shauna Cross’s 2007 young-adult novel, “Derby Girl,’’ and it marks Barrymore’s feature-film directing debut. It’s also her latest platform for celebrity-style rebellion.

“I don’t believe I’m the typical game player, good girl, perfect on the red carpet,’’ she says of her place in Hollywood, where she has been employed in movies since she was 3. “I don’t subscribe to the look of it all.’’

As if to prove this, she sits down for a recent Boston interview dressed in a pleated mini skirt, plaid knee-high stockings, and stiletto-heeled ankle boots. Her perky blond bob ends in a two-inch band of black that suggests she might have been hung by her ankles and partially dunked in a vat of tar. Aggressive red lipstick calls unneeded attention to her trademark crooked smile.

“Whip It,’’ which was written for the big screen by Cross, is the semi-autobiographical tale of a misfit teen living in the shadow of Austin, Texas, where competitive roller derby began a serious comeback in 2001. Ellen Page stars as Bliss Cavendar, a.k.a. Babe Ruthless, would-be pageant queen turned counterculture superhero after she dusts off her Barbie skates and learns to block like a lineman. Marcia Gay Harden and Daniel Stern play her out-of-touch parents. Alia Shawkat is her high school BFF, Landon Pigg is the alt-rocker hottie she falls for, and her newfound tribe of roller derby sisters includes Barrymore (hard-living Smashley Simpson), Juliette Lewis (cocky Iron Maven), and Kristen Wiig (the den mother, Maggie Mayhem).

“I really felt so awkward growing up,’’ Barrymore says of her attraction to stories about females on the fringes (see “Never Been Kissed’’). “I absolutely went through that phase that everybody yearns to get out of. . . . I was just lucky to be born into a batch of crazy, eclectic, interesting people who were faulted and human but also incredibly talented.’’

That creative dynasty, for anyone who doesn’t know by now, includes paternal grandfather John Barrymore, a legendary actor whose siblings were the equally famous thespians Lionel and Ethel Barrymore. Her paternal grandmother was the actress Dolores Costello, daughter of filmmaker Maurice Costello. Additional generations of performers followed, as did a family reputation for substance abuse and dysfunction.

Drew Barrymore had particularly public battles with her demons early on, quickly descending from adorable child star (“: The Extra-Terrestrial’’) to ill-advised young diva mostly known for a troubled adolescence that involved stints in rehab, a suicide attempt, and court-ordered emancipation from her mother’s care at age 15. She reclaimed her life and career with some modest successes (“Boys on the Side,’’ “Scream,’’ “The Wedding Singer,’’ “Ever After’’) and the launch of her own production company, Flower Films, formed with Nancy Juvonen in 1995.

Flower Films has given birth to, among other things, “Charlie’s Angels,’’ “Donnie Darko,’’ and “Fever Pitch,’’ the last of which made Barrymore a devoutly worshipful member of Red Sox Nation. Now comes “Whip It,’’ which is set in an even more irreverent sports world than the one inhabited by Kevin Millar’s 2004 band of lovable idiots. It is a world where heavily tattooed women in hard-shell bras talk endless smack, while circus-style announcers with names like “Hot Tub’’ Johnny Rocket (gleefully played by Juvonen’s husband, Jimmy Fallon) do their best to explain the rules and whip up the fans. But is it really representative of today’s roller derby scene?

Yes and no, say the sport’s passionate practitioners, who are already throwing punches in cyberspace over the way the movie depicts violence and wacky shenanigans on the track, including one proud moment where an entire team spins around to bash their opponents in the face.

“We definitely hit the crap out of people, but we do it in a legal way that’s respectful, because there’s so much violence towards women already,’’ says Alley “Dee Stortion’’ Trela, 28, who recently opened Bruised Boutique Skate Shop in Nashua, where she competes for the Skate Free or Die! All Stars team. “We’re athletes. We don’t want people thinking that roller derby is women beating each other up.’’

Nor do they want you thinking it’s as scripted and staged as what you see onscreen.

“The campiness is still there,’’ admits Kristin “Ruby Kahn’’ Bierfelt, 32, an original member of the Boston Derby Dames league. “But now the only thing that’s fake is our names.’’

Like most in the modern grassroots game, Trela and Bierfelt play on a flat track rather than the banked kind seen in the film, which is another potential sore spot for those trying to rid the sport of throwback comparisons. Barrymore fields such criticisms with one of many polished answers put forth during our interview: This movie is “as authentic as I could make it,’’ she contends with seeming sincerity, “and if there are any flaws in that, I suppose it’s my fault.’’

She goes on to say that her reason for choosing Cross’s screenplay as her first hands-on foray behind the camera was a deep connection to its “be your own hero’’ themes and counterculture elements, which seemed well-suited to exploit the talents, loves, and life experiences she’d saved up in what she calls “this piggybank that I knew I would eventually break on the floor one day when I was ready to direct.’’ Films she cites as influences include “Breaking Away,’’ “Pretty in Pink,’’ “Foxes,’’ and “The Bad News Bears.’’ Thankfully she wasn’t out to remake “Kansas City Bomber’’ or “Unholy Rollers,’’ though derby fans might have liked her to mention “Hell on Wheels.’’

At the very least, “Whip It’’ goes all out to deliver hard-core action set to an inspired soundtrack. A number of professional skaters were cast, and principal actors attended a one-month training camp where the director put herself through the same paces and bruisings as everyone else. Barrymore crows about making room in her modest $10 million budget to choreograph each scene and film it in an old-school, widescreen style. She mentions employing three cameras simultaneously, as well as Technocranes and scissor lifts, all while acting in the movie herself. When her interviewer references the old line about how Ginger Rogers did everything Fred Astaire did, only backward and in high heels, Barrymore squeals, “I could only hope to be Ginger! But I tried to Ginger out; I totally did this mother on skates. And it was painful and terrifying but I just kept saying, I can do this.’’

Maybe there’s a metaphor in the leg whip, where a skater grabs her teammate’s extended boot and is propelled up the track at an ungodly speed not achievable on her own. Barrymore has plenty of experience barreling through Hollywood’s unconventional corners. As a director, her mission is to maintain position, navigate wisely, and maximize the efforts of an entire team. Sometimes on skates.