Original ‘Fame’ is the one to remember 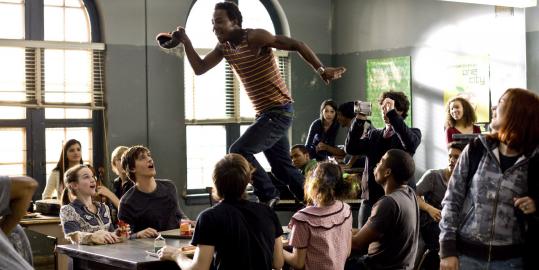 It’s not a good sign when the first few minutes of a movie about singing, dancing, rapping, video-camera-wielding teenagers reminds you of a certain grimy horror franchise. But from the minute the camera drifts toward a series of light bulbs arrayed around a single word -- “Fame,’’ done up in the iconic font of the 1980 film -- you could be forgiven for asking yourself how you wound up in a “Saw’’ movie. We hear only the imperative lyrics of the original movie’s title song (“Re-mem-ba! Re-mem-ba! Re-mem-ba!’’) and the famous taunts made by Debbie Allen, who played the dance instructor: “Right here is where you start paying in sweat.’’ This is usually how the serial killer in “Saw’’ introduces his death games.

Lives are spared in this sugarless new version of Alan Parker’s movie and the TV show it spawned. But innocent songs and unsuspecting dance routines are hacked to bits. Like its predecessors (there was also a season of “Fame L.A.’’ and an NBC reality contest inspired by all of this), the 2009 edition is also set at the New York High School of Performing Arts, or “the P.A.,’’ where a clan of fresh young faces descend for four years of - well, that’s part of the problem.

In Parker’s movie and on the TV series, we were handed a batch of talented New York kids with wild energy, neon personalities, and just enough self-belief for you to believe in them. And over the course of the school year and a television cycle, we watched the school’s staff hone skill into art. In the film especially, you could see the work. You could see the skill. Parker really showcased them, sometimes to ridiculous but memorable effect. I don’t know what we’re supposed to admire about this new cast of enrollees. They’re all camera-ready but mostly unremarkable. Written by Allison Bennett and directed as a music video by Kevin Tancharoen, the movie sees something in them in that I can’t.

We’re told that of the 10,000 people who apply to P.A. only 200 are accepted. Frankly, I’d like to see the other 9,800. Kay Panabaker, who plays an uptight drama student named Jenny, is nice and all, but the object of a movie like this is to show us how four years of intensive training can turn this meek little girl into a great actor. Her stammering line delivery and timid demeanor promise only the next Neve Campbell. Forget P.A., Jenny’s attending the “Party of Five’’ Academy.

She’s locked into a romantic story line with Marco (Asher Book), a squeaky-clean singing student with a strong Ralph Macchio haircut. His interest in her is baffling, since she’s dull and he seems just as likely to chase Neil (Paul Iacono) an aggravating acting student desperate to make movies, or Kevin (Paul McGill), a dancer struggling to make an impression. The movie just isn’t that interesting.

The big surprise is meant to be that Denise (Naturi Naughton), the gifted pianist, might be an even better singer of sappy ballads and hip-hop hooks. But having seen Naughton raunch it up as Lil’ Kim in last winter’s “Notorious,’’ this more wholesome version of herself is underwhelming. Frankly, one Ashanti is plenty. Denise defies her parents and teams up with a music classmate (Walter Perez) and rapper classmate (Collins Pennie), who is having trouble emoting in acting class (show me a rapper who doesn’t?). The tune they create together sounds like a retro dance-house number. They debut it at a costume party, which is about right, since the song suggests that 2009 has clearly gone dressed as 1992. Does P.A. even offer a class in C&C Music Factory?

A lot has changed in the three decades since “Fame,’’ namely fame itself. The original kids really believed, however naively, in their talent, that it would win out over everything. This time the students at P.A. seem entitled to success, and with so many avenues to other people’s laptops or living rooms, there’s some truth in that. But the casting directors don’t seem to appreciate that entitlement is not a means to entertainment. It’s exasperating. Whenever Panabaker sings or Pennie raps I found myself longing for the blunt assessments of Simon Cowell.

Allen makes a few appearances here as P.A.’s principal, and the electric feeling you got from “Fame’’ in the 1980s was seeing her and the other adults spot talent in these kids. Watching Gene Anthony Ray perform in the movie, Allen looked like she’d caught the vapors. I spent this movie searching for that awed reaction in the faces of the actors playing the teachers - Charles S. Dutton (drama), Megan Mullally (singing), Kelsey Grammar (classical music), and Bebe Neuwirth (dance). There are no teachers’ lounge discussions here. And I think it’s because they’d be brutal.

What you really want though is a wow moment. And there isn’t one. There’s no Susan Boyle or Jennifer Hudson or disarmingly fun number to be found amid all telegenic faces. There’s more to savor in any installment of “High School Musical.’’ No one here has any funk, soul, charisma, or spontaneity. It’s true that not many of the actors of the original movie and show became big names, but “Fame’’ made them all seem like stars. Now the glorious threat of the title song seems like a joke. I’m gonna live forever? Not this time.