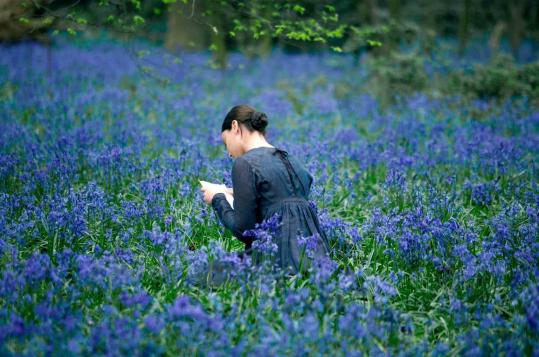 ‘Bright Star’’ is ripe with the eroticism of a proud woman being seduced by words and undone by emotions. If that’s not worth more than a year of Megan Fox movies, I can’t help you.

The film, writer-director Jane Campion’s first in six years and best in 16 (since 1993’s “The Piano’’), tells the story of the poet John Keats (Ben Whishaw) and his relationship with Fanny Brawne (Abbie Cornish), an 18-year-old Hampstead seamstress who lived with her family near Keats. The romance was brief and unconsummated, cut short by the poet’s death in 1821, at 25, of tuberculosis. Yet the 39 surviving letters Keats wrote to Brawne are wrenchingly passionate; if their love was a small pool, it was also bottomless.

The normal Oscar-season treatment of this subject would be to spotlight the great poet’s struggles with his art and his muse: thunder on the soundtrack and Fanny sitting in the back of the bus. Campion does something shocking, even subversive: She makes Brawne the subject and Keats the limpid love object. Fanny’s emotional journey becomes the focus; the poems mostly shimmer in the background haze. At the same time, “Bright Star’’ is so far from the pejorative term “chick flick’’ as to make your head spin. This is a woman’s film in the deepest ways possible.

That extends to the pace, which is hushed and intimate; some will mistake it for dull. The film at first seems the opposite of drama, as Fanny and Keats almost casually come into contact in their rural corner of England. He is staying with his friend and backer Charles Brown (Paul Schneider), she’s a tart-tongued woman of modest means and practical outlook. If you think that Fanny is a Jane Austen heroine, so, in a sense, does Fanny. The movie’s explicitly about how the age of Austen was vanquished by the Romantic era of Keats, Byron, and Shelley - how sense tumbled helplessly and willingly into sensibility.

Fanny’s attempts at intelligent banter thus fall flat because, simply, Keats doesn’t play that. She’s still drawn to his gentleness and to the sensitivity that makes him quiver like an antenna in a top hat. By the time the two share a kiss by a sleepy riverside, the planet itself seems to wobble on its axis. Some may be disappointed that “Bright Star’’ is lacking in the transgressive kink of “The Piano’’ and other Campion films, but the emotions here are no less galvanic and no less profound for the characters keeping their clothes on.

In fact, the people around the couple are slightly freaked out by what’s happening. The penniless Keats is no fit match for Fanny, yet even her mother (Kerry Fox) has to respect the urgency of their feelings. Brown is the closest the movie comes to a villain, a cynical boor who knocks up his housemaid (Antonia Campbell-Hughes) and banishes Fanny so the boys can work on their plays and poems. His love for Keats humanizes him, though, even if he loves the art more at first. For Fanny, the art and the man are inextricable. You could sooner separate white from milk.

Schneider gives a canny, outsized performance - one I didn’t think this North Carolina-born indie actor had in him - but the movie belongs to Cornish, who stays with Fanny as she moves from corseted certainty to the wildness of raw infatuation. The actress has dyed her blonde hair a mousy brown, and she fills out the period dresses with period solidity. She’s a woman, not a twig, and she lives up to Keats’s description of Brawne as “beautiful, elegant, graceful, silly, fashionable and strange.’’ There’s not a single overdramatized gesture to the performance, yet it crosses immense distances.

If “Bright Star’’ has a weak link, it’s Whishaw’s Keats, so passive as to seem nearly prostrate. Tuberculosis will do that but so will objectification; it may be that we’re not used to seeing the heroes of our movies side lined onto pedestals. (For this reason and others, certain men will despise this film.) Because he comes to us through Fanny’s eyes, John Keats remains a mystery. Whishaw gives him a grave charisma, though - we want to know him better.

In fact, Campion says we can know him - and Fanny, and her family, and Brown - through the society they make. “Bright Star’’ is rapturously attentive to period detail, to the sounds and rhythms of early-19th-century life, the better to ground the emotions that bleed from the central couple.

Grieg Fraser’s camerawork works in earth tones and stays at a respectful remove, or maybe it just wants to crowd John and Fanny’s world into the frame. There’s a party scene early on in which a group of men, Keats included, perform as an a cappella “human orchestra,’’ and you can feel the deep, inarticulate fellow-feeling that knits these people together. It’s this essence, the real behind the everyday, that Keats got on paper and that Campion works to capture on film. She comes close enough to make other movies seem shiny and disposable. “Bright Star’’ is a thing of beauty and a joy for a movie season that needs it.