Once a boy wonder, now an A-list star, Matt Damon, at 38, ponders what’s next 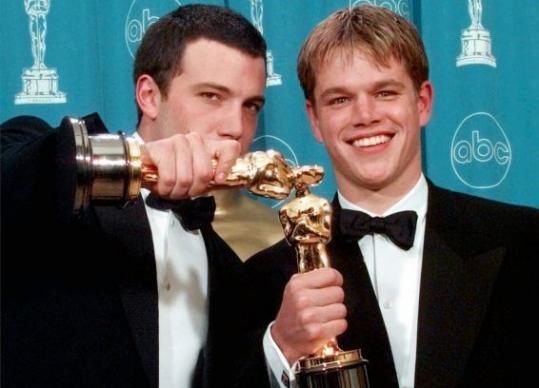 Twelve years ago he was the baby-faced actor from Cambridge who captured moviegoers as the troubled boy genius Will Hunting and then brought his mother as his date to the Oscars.

Today, at 38, Matt Damon is a singular force in American culture, ubiquitous on screen and off. His global philanthropy is robust, cementing his Tom Hanks-like reputation as one of Hollywood’s good guys. Women and directors swoon (People Magazine has named him “Sexiest Man Alive’’ and Forbes in 2007 dubbed him one of cinema’s most bankable stars). He is as comfortable playing a pudgy, nerdy whistleblower, as he does in his latest, as a lean and ripped killing machine.

Though his journey to Hollywood royalty hasn’t been without missteps (“All the Pretty Horses’’? “Bagger Vance’’?), his name alone can now carry a movie. He’s got the monster Bourne franchise, and he’s comfortable enough in his image to mock himself in a raunchy, YouTube video. If “Good Will Hunting’’ defined him for the shock of his talent, today he is defined by the breadth of it.

“He’s not playing the same role over and over again like Tom Cruise,’’ says Chris Cooper, the gifted character actor who lives in Kingston and worked with Damon in the first two Bourne movies, monster hits based on the Robert Ludlum novels.

All that said, the demands of acting are no longer as appealing for Damon as they used to be, not with his wife, Luciana, at home in New York this year with their two young daughters and his 11-year old stepdaughter. “We just can’t go on the road anymore,’’ he said earlier this week in an interview high above Central Park in Manhattan to discuss his latest film, “The Informant!’’, which opened here Friday. “I won’t take six-month jobs in Uzbekistan.’’

So does that mean fewer movies? Smaller movies? Or movies just closer to home? “I think all three,’’ he adds.

It also makes attractive a new role, off camera: director.

Directing appeals to Damon for the balance it would allow him to bring to his life. After filming, the long months of post-production editing would let him eat breakfast with his kids, drop them off at school, go to work and still be home for dinner.

But creative control is the real appeal for him.

“It could be next year or five years from now,’’ he says of directing. “I’m not in a race to start doing it. I feel like I’m getting so much experience with great directors. All I’m doing is learning more. It doesn’t feel like taking movies as an actor is in any way a detriment to my career as a director. On the contrary, it augments it.’’

His acting heroes include Robert Duvall and Gene Hackman - actors who’ve had long careers gracing movies with nuanced character parts, something Damon has done in films like “Courage Under Fire,’’ and “The Talented Mr. Ripley.’’ But for directing, Clint Eastwood is his role model, which may explain why he just finished filming one movie directed by Eastwood and has just signed on for another.

“He told me he never took a job directing except for himself,’’ Damon said. “He said, ‘I’m your tour guide. If you don’t like the tour, you can get off and I’ll invite you again next time.’ I think that’s a healthy and proper way to look at this.’’

Damon is also an Academy Award-winning writer, for his 1997 breakthrough movie, “Good Will Hunting,’’ with his boyhood buddy from Cambridge, Ben Affleck. (Damon’s local ties have attenuated considerably, but he remains in close touch with his mother, who lives in Somerville, and his older brother Kyle, a sculptor who lives in the area. His Red Sox loyalty was clear when he narrated the team’s official 2007 World Series DVD, but he hasn’t been back home for two years.

He hasn’t worked with Affleck, since “Hunting,’’ but they remain close. Each has simply pursued his own path. But Damon says now that they both have young children it would be nice to be living on the same coast, at least. (Affleck lives in Los Angeles.)

In recent years, Damon has written during the filming of movies when the screenplay needed work; he did some writing for the last two Bourne movies, and he’s done some in the upcoming “The Green Zone,’’ a thriller set in Baghdad.

Reflecting on actors as writers, he recalled a time after the first rehearsal for “The Departed,’’ when he and the director Martin Scorsese visited Jack Nicholson in his Boston hotel room to work on a scene. “He was scribbling some notes, some adjustments,’’ said Damon, and then in a peerless Nicholson imitation, said: ‘You know, I never would have made it this far if I wasn’t a great [expletive] writer.’ It was an epiphany to me. I’m a writer. I love writers and defer to them.’’

He sees directing and writing as two ways to have what he wants, work with whom he wants, order his life the way he wants. “By the next school year,’’ said Damon, who was dressed casually in a black V-neck T-shirt, jeans, and black shoes, “we’re going to have to pull the trigger and figure out where we want to be for the next 10 or 15 years.’’

Damon is buff without carrying the bulky muscles of a lifter. He makes no waves as he moves through a hotel lobby. What he’s not doing is looking for attention.

But in the meantime, he’s done with 20-hour days. “You shoot all day, have dinner and work on a screenplay until midnight and then get up at five and start all over again. I enjoyed it but I’m not going to do that anymore.’’

Most actors never reach the heights where they can turn away jobs. Damon has clout now, which he earned without any game plan to his choices of movie roles. What he sought to avoid was typecasting.

Instead, he’s using his stature to work only with great directors with great scripts, and take on risky roles like the complicated part of Mark Whitacre in “The Informant!’’ or, as he is planning to do next summer, play the younger gay lover of Liberace in a biopic starring Michael Douglas.

“No one is on the A list forever,’’ he said. “But I like the ability to control my choices right now. That could get addictive. It’s a great feeling not to have to take a job other than because I really want to do it.’’

He is a sophisticated Hollywood player today far from the innocent young man who made “Hunting,’’ but his character and measured approach to life remains the same.

Whether he carries a movie or takes a small part, he burrows into roles that are complicated and often unappealing. It is that reach that has laid the groundwork for his future, says Jeanine Basinger, head of the Film Studies Department at Wesleyan University. “ ‘The Good Shepherd’ totally transforms him from a hot guy to a repressed, internal man,’’ she says. In it, he plays an impacted CIA official. “You look at that film and ‘The Bourne Identity’ to see why he’s going to last.’’

There is a clear link, she adds, between “The Good Shepherd’’ and “The Informant!’’ Whitacre is a dark character who just happens to carry the movie. But Damon’s next role shows his willingness to be a character actor rather than a lead. He plays a small part in the upcoming “Invictus’’, a film about Nelson Mandela and South Africa’s rugby team, which he took so he could work with Eastwood. After that, there will probably be another Bourne in 2011.

“We haven’t seen all of his colors yet,’’ says Steven Soderbergh, who directs Damon in “The Informant!’’ and the upcoming Liberace film. “His motives are very pure. He just wants to be in good movies, and says. “If that’s your MO, you have all the options in the world. Matt’s greatest strength as an actor is his fearlessness. That’s one quality all the really great actors have. They’re fearless.’’

Another quality Damon has is good manners; he was well brought up. If he’s in the tabloids, it’s not because of a scandal. Some people fake their interest in a conversation. Damon seems to listen intently, he doesn’t interrupt, he thinks about a question before responding.

He’s especially interested in talking about his philanthropy, and his focus - water. He co-founded a nonprofit called Water.org that provides poverty-ravaged places from South America to Africa and Asia with access to safe water and basic sanitation. His organization built a well in a poor village in Ethiopia. “It was a horrible situation,’’ he recalled. “Animals were drinking out of the same water source as people. We put in this terrific well that will last the village forever.’’

When it’s suggested that with everything he has going on, he’s become a matinee idol, he cringes.

“I don’t see myself as that at all. I have friends who are matinee idols,’’ he says. “George Clooney is a matinee idol. There’s a huge difference you can see if we walk into a room together. It’s nothing I aspire to. I’m at a place where I’m getting these great roles and I’m left alone.’’

Still, his failures hurt. “ ‘All the Pretty Horses’ was one of the most painful professional experiences I’ve had,’’ Damon said. “Creatively, that was a dagger in my heart. [Director] Billy Bob Thornton delivered a three-hour movie that I’m still as proud of as anything I’ve ever done, and no one has seen it. He directed a great three-hour movie that the studio [] demanded be cut to two. You can’t do that.’’

Chris Cooper’s contrast between analogy of Damon to Cruise is an interesting one. Cruise is eight years Damon’s senior. They both had the boyish looks and star quality at a young age (Cruise was 21 when “Risky Business’’ came out, Damon was 27 when “Good Will Hunting’’ did). Cruise has been paparazzi fodder for years and jumping on Oprah’s couch didn’t help; he’s on his third marriage, and he seems desperate to reestablish himself.

It’s a path Damon is determined not to take. “I have a shot at living a pretty normal life,’’ he says, “and that’s what I’m hoping I can pull off.’’

From lovable beefcake to tubby informant, check out the actor's onscreen roles.
Your comment is subject to the rules of our Posting Policy
This comment may appear on your public profile. Public Profile FAQ