'Tyler Perry's I Can Do Bad All By Myself'

Tyler Perry shows he can do well, but not all by himself 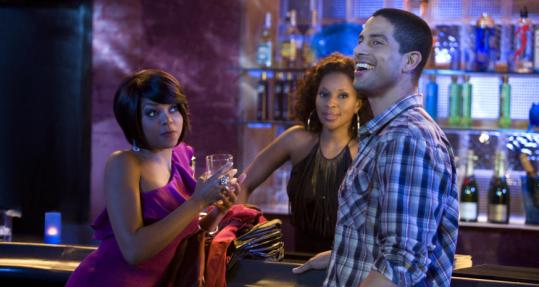 From left: Taraji P. Henson, Mary J. Blige, and Adam Rodriguez star in “Tyler Perry’s I Can Do Bad All By Myself.’’ (Quantrell Colbert)
By Ty Burr Globe Staff / September 12, 2009

“Tyler Perry’s I Can Do Bad All By Myself’’ didn’t screen for critics, but it’s the best Tyler Perry movie to date - the writer/director/actor/mogul’s most confident and competent mixture of uplifting black middle-class melodrama and low-down comedy. It’s easy to spot the reasons, too.

About halfway through the film, the story’s neighborhood pastor sermonizes on the subject of “added value’’ in terms of good works. “I Can Do Bad All By Myself’’ has its own added value thanks to the presence of three legendary singers and one incandescent actress in its cast. That pastor is played by the Rev. Marvin Winans of the celebrated gospel family. One of the church ladies, Miss Wilma, is played by Gladys Knight, minus her Pips; she’s shyly called up to the altar to belt a number in one scene.

Miss Wilma also sings a ballad in a nightclub sequence that has one of the onscreen patrons wiping a tear from her eye; it was getting pretty moist in the theater I attended, too. Later the club’s sardonic bartender steps up and blows the walls down with the title tune, and if she sounds just like Mary J. Blige that’s because she is Mary J. Blige.

That’s a club I want to go to.

Did I mention there’s a plot? A soggy but sure confabulation about April (Taraji P. Henson), a featured attraction at the club who wants nothing in her life but her mean-spirited married boyfriend (Brian White). Events conspire to install her dead sister’s three children in April’s living room and a handsome churchgoing Colombian handyman (Adam Rodriguez) in her basement.

“I Can Do Bad All By Myself’’ mostly consists of April angrily driving away those who might love her then melting under the caring pressure of community. It’s corn but effective corn, and it’s put over with intense conviction by Henson. She acts with her eyes here; they start out dead and by the end brim with everything welling up in April’s soul.

Perry is learning to balance his earnest soap opera moralism with his comic instincts; the movie’s overlong but well-shaped and involving. Subplots include the oldest niece (Hope Olaide Wilson) working out her own hostilities, and there are, as always, a few appearances by Perry in his Madea and Joe guises. Those characters remain popular, but the movie benefits from their low profile. As Perry becomes a genuinely effective filmmaker, Madea seems more and more of a drag.

TYLER PERRY’S I CAN DO BAD ALL BY MYSELF Written and directed by Tyler Perry, based on his play