Watching them rage against the machine 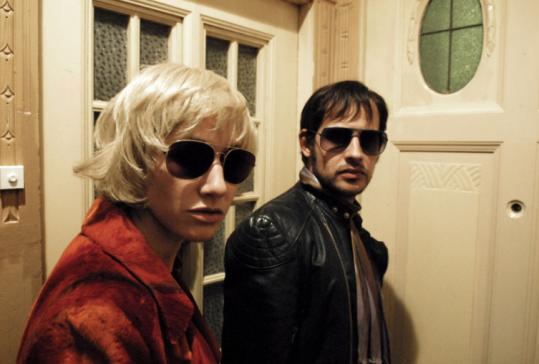 If only American guerrilla outfits got the intense treatment that “The Baader Meinhof Complex’’ applies to Germany’s Red Army Faction (RAF). The movie, directed by Uli Edel, is swift, brutal, lurid, often overheated, and occasionally comical, but it’s also a serious, well acted, and unromantic exploration of the rise and demise of a terrorist gang whose radicalism ultimately reached beyond the young men and women who set it in motion.

Edel shoots the film in the unsteady hand-held style of docudrama. The camera is always watching, chasing, or getting out of the way, and the explosions aren’t massive movie bombs, just loud, effective-enough little numbers that toss bodies across a room and leave survivors crawling through debris.

The movie starts in 1967 with protests against the Shah of Iran. The police join in, stomping protesters, whacking them - OK, bludgeoning them - with nightsticks and planks of wood. The trumped-up music that accompanies the violence is too much (it brings things closer to a Paul Verhoeven thriller than they probably need to be). But these sequences feel terribly real otherwise.

That afternoon’s most notorious incident was the police shooting of Benno Ohnesorg, a virgin protester whose death produced an iconic photograph and, earlier this year, led to surprising details about his shooter. That’s material for an entirely different movie. But Ohnesorg’s very brief appearance here is a clue to how comprehensive this movie aspires to be and how much his death galvanized the German student movement.

Andreas Baader, Gudrun Ensslin, and Horst Mahler turn to radicalism as an expression of rage against what they saw as the German government’s oppression of its people, against Germany’s support of dictators, against the United States’ handling of Vietnam and disgust with generic US imperialism. Baader (Moritz Bleibtreu), Ensslin (Johanna Wokalek), and Mahler (Simon Licht) were part of the student protest movement that had been erupting around the world. But they crave destruction, setting bombs and starting fires. Their eventual arrests inspire a leftist Berlin columnist named Ulrike Meinhof (Martina Gedeck) to write in their defense. (She once said that setting a car on fire is a criminal offense. Setting a hundred cars on fire is a political act.)

After some interviews with the formidably persuasive Ensslin, Meinhof finds herself helping to spring Ensslin’s boyfriend, Baader, from prison by arranging a bogus interview with him. It’s another stressful sequence that culminates in the culprits shooting innocent people, and leaping through a window to freedom. Meinhof stands back, takes a second to think about what she’s about to do (give up her bourgeois life and two children) then jumps through, too. I don’t know whether she actually did this, but it’s a great image. This woman has just hurled herself down a rabbit hole into an alternate political universe.

The film follows the execution of the group’s plots and its subsequent capture, imprisonment, and trial, during which the members, particularly Meinhof and Ensslin, start going a little mad. Amid the high dudgeon, there’s comedy. One trip to the Middle East, for instance, lands the group in a revolutionary training camp that has them crawling on their stomachs under barbed wire while holding rifles. Baader, whom Bleibtreu plays as if he were the lead singer in a band, says that’s enough. They’re not those kinds of guerrillas.

It’d be nice to see an American filmmaker commit a similar reckoning with the Watts riots, the Weather Underground, or the Black Power movement, not simply resort to cant and kitsch but to really interpret those moments and connect them to the state the country was in. That’s what Edel and his collaborators have done here in adapting Stefan Aust’s history of the RAF. For as much as the RAF acted politically against the German state, the basis for their actions was psychological.

Many of the systems and people they attacked enabled Nazi Germany, and these Nazis were their parents, if not actually then certainly figuratively. So what the country had on its hands was a sustained generational rebellion. These kids wanted to rise up in a way they felt their parents had failed to. In this film, their revolt has left them obnoxious and rudely intolerant.

Taking up the German patriarchal cause is Bruno Ganz (of course!). He plays Horst Herning, the head of the German police. Even as he supervises the ruthless hunt for these kids, he seems perplexed by their angst. That generational resistance is why the RAF had the support of German youth for so long. It wasn’t just politics. It was proto-punk rock.

Adapted by: Bernd Eichinger and Edel, from the book by Stefan Aust

In German, with subtitles