Some frozen stiffs, but few chills in ‘Whiteout’ 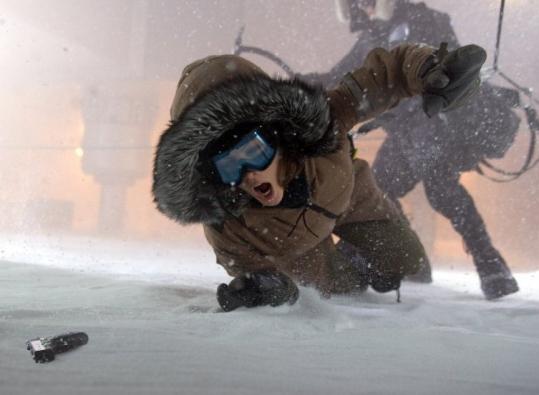 Kate Beckinsale stars as a US marshal in “Whiteout.’’ (Warner Bros. Pictures via Ap)
By Ty Burr Globe Staff / September 11, 2009

In its early scenes, “Whiteout’’ feels like it’s setting us up for an Antarctic “Alien.’’ There’s the scientific base far, far from civilization; there’s Kate Beckinsale nonsensically stripping down to her tighty-whities just like Ellen Ripley; there’s something spooky in a box; there’s even Tom Skerritt, the interstellar captain of “Alien,’’ as Doc, sawbones of Camp Amundsen-Scott at the South Pole.

At this point, the parallels stop cold. Based on a much tauter graphic novel series, “Whiteout’’ is a ham-handed murder mystery that starts out average and heads south from there, falling apart under the pressures of graceless camerawork, leaps of illogic, and TV-movie production values.

The setting is novel, at least, and “Whiteout’’ fits neatly into the new forensic-pathology chic. Beckinsale plays a US marshal named Carrie Stetko but she could just as well be Dr. “Bones’’ Brennan for all the ghastly dead bodies she uncovers. The first has apparently been thrown from a plane. The second has his throat cut. Carrie’s very nearly the third.

Who is killing the geologists of the Antarctic? It has something to do with the contents of that box, buried under the ice in a Russian transport plane that crashed back in 1957. (If you’re hoping for something supernatural, don’t hold your breath.) Carrie investigates with the aid of Doc, a raffish pilot (Columbus Short), and a “special UN investigator’’ played both smugly and woodenly - no mean feat - by Gabriel Macht (“The Spirit’’).

Beckinsale is her usual lovely and brittle self, but it says something about this capable British actress that she can go slumming in the funkiest of genre films - the “Underworld’’ series, the tatty motel horror film “Vacancy’’ - without ever appearing to enjoy herself. Why does Beckinsale keep taking these roles? That’s a greater mystery than anything on the screen.

After some decent opening banter and a few interesting tracking shots through the base station, “Whiteout’’ settles into a rut of barely acceptable professionalism. Director Dominic Sena (“Swordfish’’) fails to combine the film’s elements into a coherent whole, which, when you think about it, is what directing fundamentally is. Chris Soos’s camerawork is overwrought; you can’t tell who’s doing what to whom during the indoor scenes, and forget about the snowstorms. John Frizzell’s score is strictly hourlong television drama.

Worse, the characters keep walking into crime scenes and figuring out exactly what happened based on the most tenuous physical evidence; the low point (or high point; take your pick) comes when Carrie accurately reconstructs a complicated gun battle based on a pile of frozen 50-year-old corpses. There’s insight, and then there’s bad screenwriting.

The resolution is especially disappointing; a straight-up B-thriller like this shouldn’t make audiences feel like they’ve wasted their time. “Whiteout’’ fritters away its suspense, its setting, and our indulgence. You come away wishing someone had applied White-Out to the script.