For the Love of Movies

An insider looks at film criticism through the years 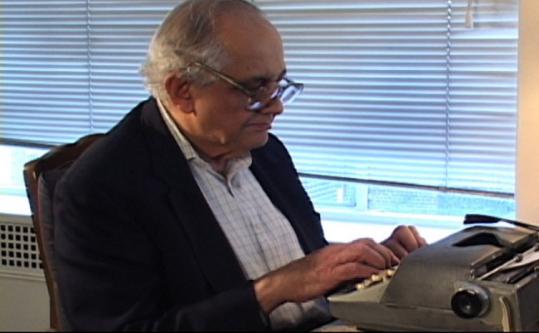 Andrew Sarris (above) is among the writers featured in Gerald Peary’s documentary about film criticism.
By Ty Burr Globe Staff / September 9, 2009

A documentary about the history and current state of film criticism may seem like awfully inside baseball, but someone had to make it, and who better than Gerald Peary, longstanding Boston Phoenix reviewer, scholar, professor, curator, and all-around gadfly?

At 81 minutes, “For the Love of Movies’’ may be overlong to some and not nearly long enough for others. Like some of the screenings we critics attend, it has problems with focus. An emphasis on movie clips and talking-head interviews with writers, who - let’s face it - didn’t get into the business because of their looks can be wearying.

Yet the movie’s a lively and important first step in assaying the worth of a field on the verge of extinction, as more and more professional reviewers are let go from struggling news organizations (nearly 60 in the past 3 1/2 years). Yes, yes: Cry me a river. The question bears asking, though. What can the better working critics offer to a world where everyone is digitally empowered to give an opinion? It depends on whether you think context, clarity, and a broad understanding of film history, world history, and culture are important.

(Caveat: This review is hopelessly biased, obviously, since I’m one of those dinosaurs myself, Peary is a personal friend, and my Globe colleague Wesley Morris appears in “For the Love of Movies,’’ along with such other professional acquaintances as A.O. Scott, Lisa Schwarzbaum, and Roger Ebert. The experience is not unlike a food critic being asked to review a meal cooked by his mom. If I’ve had better meatloaf, I’m certainly not going to spit it across the room.)

Besides, this is a meal no one has ever cooked before: an affectionate, knowledgeable overview of film criticism from the silent era to the Internet. Via his narrator, actress Patricia Clarkson, Peary picks out the key figures in the development of thinking and writing about movies, from poet Vachel Lindsay in the 1920s through the great Otis Ferguson, his career cut short by WWII, to Manny Farber, James Agee, and the arrival of the French auteurists and their American counterparts in the 1960s.

“For the Love of Movies’’ spends a lot of time on the latter era, and for good reason: The movies were great, the writing was spectacular, and millions were reading it. The New Yorker’s Pauline Kael appeared on the scene like the Elvis Presley of film criticism, electrifying readers with vibrant prose and punchy opinions. Entertainment Weekly reviewer Owen Gleiberman rightly thumbnails Kael as Dionysian and her chief rival, Andrew Sarris at the Village Voice, as Apollonian; the aging Sarris dissects their decades-long feud with the weary humor of a survivor.

We could have heard more selections from the reviews themselves (and read aloud by stronger voices at that). The movie slows its own momentum by pausing to ask fluffy questions like “Did You Always Want to Be a Film Critic?’’ “For the Love of Movies’’ still covers a surprising amount of ground. Peary acknowledges Kael’s critical heirs - known as “Paulettes,’’ they’re all men - and tracks the slow decline of the written review across a terrain of Hollywood teen blockbusters, “Siskel and Ebert,’’ the video rental industry, and the rise of Harry Knowles of Aintitcool.com and other online vox populi.

Peary’s view of these interlopers is mixed. “For the Love of Movies’’ loves anyone who loves movies, but it wonders if opinion itself becomes valueless in a world where everyone’s a critic. Above all, the film celebrates and quietly mourns the passing of a faithful band who write about that love with fire, skill, and the persuasiveness of those who want to share the good stuff. Michael Wilmington, late of the Chicago Tribune, sums it up for many of us when he describes his job as “showing people the movies they could love.’’

FOR THE LOVE OF MOVIES

At: The Museum of Fine Arts, today and selected dates through Sept. 13