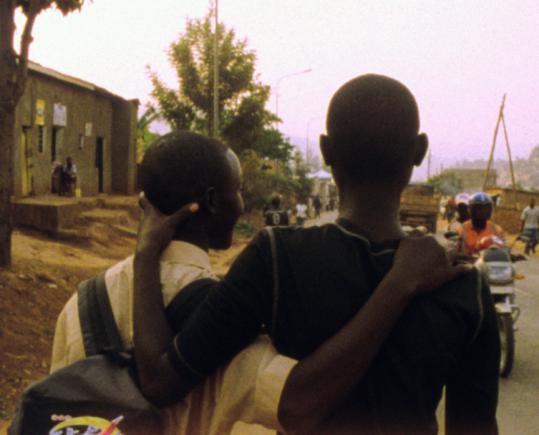 ‘Munyurangabo,’’ a contemplative film about the ongoing aftermath of the Rwandan genocide, tells the story of two young Rwandan men - one Hutu, the other Tutsi - on the road. Among the first images we see is that of a machete, and it stays with you because the person holding it, Ngabo, couldn’t be more than 15. And for a stretch of the movie’s opening minutes, he’s so unself-consciously affectionate with Sangwa, his roadmate, caressing his face and ears, their spindly arms entangled as they walk, that the machete presents a looming incongruity. What violence could this kid commit?

We know that kids much younger than Ngabo and Sangwa were recruited to help execute genocide in Rwanda. And as the film unfolds we learn that Ngabo is on a grim mission with that knife. (His full name, Munyurangabo, means “mighty warrior’’ in the Bantu language of Kinyarwanda.) Before he reaches his destination, there’s a detour to stop in on the family that Sangwa hasn’t seen in three years. His mother (Narcicia Nyirabucyeye) can’t believe her eyes. His father (Jean Marie Nkurykiyinka) wants him to help with the farm work, refusing his son’s apologetic hug and casting a hostile eye on Ngabo, since Hutus and Tutsis are supposed to be enemies. The upending of that long-standing enmity is very much this movie’s point.

Often with the movies, African problems get Hollywood solutions. “Munyurangabo,’’ which plays at the Museum of Fine Arts until Sunday, took a different route. The movie is the fruit of a summer course in filmmaking and photography at a Christian relief base in Rwanda. Lee Isaac Chung, an American from Arkansas, directed, edited, and shot the film with the participation of Rwandans, including his two stars, Jeff Rutagengwa and Eric Ndorunkundiye, who were both genocide orphans. Lee wrote the movie with Samuel Anderson, although most of it has been improvised with feeling.

The finished film, which was completed in about 11 days, has the tidiness and optimism of a fable. But it showcases certain hard facts of life in a war-torn country whose scars have yet to heal.

Written by: Chung and Samuel Anderson

At: the Museum of Fine Arts