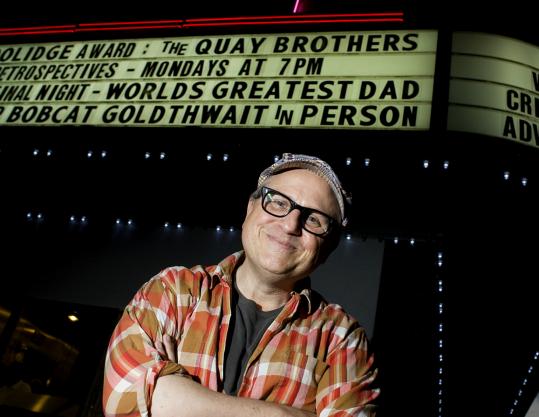 So who is the real Bobcat Goldthwait? Now 47, he would prefer you don’t think of him as either the screechy dude from the “Police Academy’’ films or the weirdo comic who set fire to Jay Leno’s couch. That was then. Goldthwait’s true love, he says in a soft voice during an interview on a recent stop in Boston, is writing and directing. His third and latest film, “World’s Greatest Dad,’’ opens Friday and stars Robin Williams as a hapless father whose life changes when his teenage son accidentally dies of autoerotic asphyxiation. It’s a comedy but, as Goldthwait warns, don’t bring the kids.

Q. Is this film about killing the Bobcat we know?

A. I’m not trying to reinvent myself. I’m certainly not trying to shock people. It was really about four or five years ago I just made a decision to stop being in crappy movies and TV shows that I would never watch. It just didn’t make me happy. I started writing screenplays just to write them.

Q. Your last film, “Sleeping Dogs Lie,’’ was about a woman who admits to her fiance that she once performed a sexual act on her dog.

A. Yes, and I didn’t have any money so we got a crew from Craigslist and shot it in two weeks. The budget wasn’t really 50 grand for that movie and it was pretty fun because we went all around the world in film festivals and it became a DVD and now it’s on cable.

Q. At one point, while writing “Dad,’’ did you think that perhaps the words “autoerotic asphyxiation’’ would not be going on a poster?

A. These movies are hard to market and it hasn’t been proven whether there is an audience for them outside of me and my friends.

Q. How did you get the germ of the idea?

A. The last movie is about how it’s important to lie. I wanted to do a flip side of that. And I also wanted to do a movie with a guy learning to stand up for himself.

Q. It’s about a guy who is lonely and thinks he wants everybody to love him. But when they finally do, he realizes he can’t stand them loving him for that reason.

A. It doesn’t take a lot to read into it. The reality of it is, you know, I became famous or infamous and then I was really unhappy. I can still go out and do standup and I do it when I need to pay bills but I never was really true to myself. At an early age, I was a successful comedian and it didn’t mean anything to me. I didn’t enjoy it. I didn’t enjoy being the celebrity. I still don’t.

Q. But you still do standup, right?

A. It’s the alimony tour, man. I don’t enjoy it, but the truth is the people who come to see me do standup don’t read. So it really doesn’t matter what I say. I’m a nostalgia act. That dude from “Police Academy.’’

Q. You seem to know or suspect who your standup audience is. When you’re making a movie, can you picture your audience?

A. No, and I get really frustrated. Because sometimes I think there really are people out here that would like this movie but are ignoring it prior to examination.

Q. Because of your name?

A. Yeah, because I made an indie movie and I didn’t hire anybody from the cast of “Arrested Development.’’ So they don’t know it’s OK to like it.

Q. And also, on paper, it sounds hard to promote without giving too much away.

A. I like it when people refer to it as a tragedy happens and Robin is left with a choice of doing the right thing or taking advantage and getting everything he wants. But to me, all that really isn’t what the movie is about. I think the movie’s about being true to yourself, which sounds really Dr. Phil of me but that’s really what the movie’s about. I mean, certainly my movies aren’t as good as Wes Anderson’s, but how do you promote “Rushmore’’?

Q. What happens is you make one “Rushmore’’ and you create the Wes Anderson brand.

A. I think if you saw “Sleeping Dogs Lie,’’ this is a lot like it. They’re similar in tone. I guess the only thing is I don’t consider the movies I make intellectual. But I do consider them for adults. If you’re an adult and you want to see a comedy, you’re screwed. They make an R-rated movie but they’re really hoping 12- to 15-year-olds go to it. That’s what an R-rated movie is. I have no interest in entertaining teenagers. I think they’re idiots. I think there’s enough product out there for them. If you’re a grown-up and you’d like to see a movie, please come to mine.