The final ‘Destination’? One can hope. 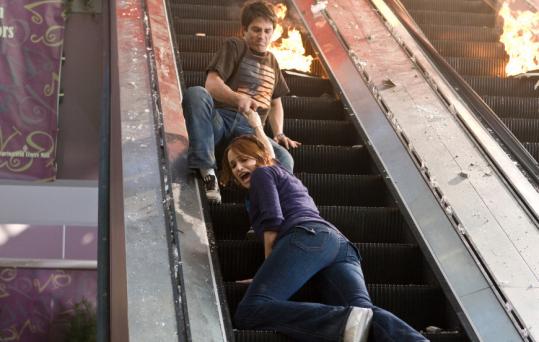 Ten years ago, the original “Final Destination’’ posed a legitimate metaphysical science-fiction headache: What if cheating death cursed you with premonitions of other people’s demises? The movie made paranoia just contagious enough for you to leave the theater nervous a bus would run you over.

Two sequels later comes “The Final Destination,’’ allegedly the last in the series, in which a different young man (Bobby Campo) tries to put the brakes on death. In 3-D. So now when a hurtling tire decapitates one woman and a speeding rock fatally puts out the eye of another, it’s as if each object were first coming for you. Yet nothing about that tire or that rock is exciting enough to make you jump.

All this third, cheaply rendered dimension contributes is an awareness of how nondimensional everything else is. The writers don’t write, the director doesn’t really direct, and the actors don’t exactly act. They wait for the movie’s contraptions to impale them. The guys look like personal trainers, the women like salespeople at Forever 21.

The gamesmanship is still heartless. The movie presents entire disaster sequences as real, then basically say “Psych! It was a premonition,’’ and stages it again. If we’re not meant to be afraid, we’re not laughing, either. I searched for the joke in the image of a black character (poor Mykelti Williamson) sitting around while a noose hangs casually around his neck. Strange, I never found it.

The climax happens at a giant shopping center inside a megaplex - an opportunity at self-deprecation blown. The setting seems off, anyway. As franchises go, this installment wouldn’t make it to a real mall. “The Final Destination’’ is the movie equivalent of a struggling strip-mall store wedged between Metro PCS and a pawn shop. Someone please foreclose.